Wally Triplett and the 1948 Cotton Bowl

Many of the athletes in American sports history that blazed brave trails through seemingly impregnable race barriers demonstrated almost super human singleness of mind and tenacity. Think of indomitable Jackie Robinson or resolute Jim Brown. But the first black player to break the college football color line in a former confederate state did not fit that mold. Wallace “Wally” Triplett lettered at Penn State from 1946 to 1948. He was one of three black members of the 1947 Nittany Lions that played in the Cotton Bowl, and went on to become the first black NFL draftee. Triplett refused to accept discrimination, resisting bigoted treatment directed his way whenever he could. But much the history Triplett made seems almost to have happened around him, often because of the ease with which he made friends.

The fifth of six football playing sons in a family from La Mott, Pennsylvania, Triplett’s talents produced numbers in his High School career that attracted attention. In those days of limited and expensive travel many programs scouted distant players from printed reports. When Wally received a letter from the University of Miami offering a football scholarship for the fall of 1945 he wondered if the coaches even knew he was black. La Mott was not an all-black community and such a factual oversight was plausible. Not wanting to court controversy Triplett wrote to Miami informing the football office of his racial status. Miami responded by immediately rescinding the scholarship offer. Triplett headed instead to University Park on an academic scholarship with a letter of introduction from his High School coach to Penn State coach Bob Higgins. Triplett earned a place on the team and fortuitously became a sophomore starter in 1946 when Halfback Joe Tepsic signed a baseball contract with the Brooklyn Dodgers. He did not explicitly set out to carve new pathways for integration and technically was not even Penn State’s first black player.

Dave Alston, the son of a black minister and valedictorian of his High School class, had removed any reluctance coach Higgins felt regarding his race with a standout season at Tailback 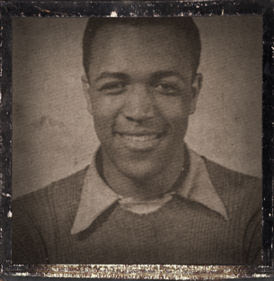 on the 1941 freshman team. Alston’s athleticism matched his disarming charm – he reputedly ran the 100 yard dash in 10 seconds. Higgins excitedly compared him to Jim Thorpe and eagerly awaited the 1942 season. Coming off a 7-2 record in 1941, Higgins’ best in his eleven-year tenure, the Nittany Lions looked poised to finally shrug the mediocrity that defined their teams during the 1930s. But fate intervened on August 15th 1942 when Alston died from complications arising from a routine appendectomy. The tragedy over shadowed a 6-1-1 season and left Penn State still awaiting its first black varsity letterman.

Another black athlete, lineman Dennis Hoggard, joined Triplett on the 1946 Nittany Lion varsity team. But before the season even began race issues appeared threateningly on the horizon. Penn State scheduled a season finale at the University of Miami - the very school that had denied Triplett a scholarship on the grounds of his race. Like all southern schools at that time, Miami would not allow northern teams to travel with their black members. Higgins wanted to leave his black players at home and retain the fixture but the school newspaper began agitating feeling on campus against accepting southern bigotry. Higgins decided to put the matter to a team vote. Triplett and Hoggard were surprised and thrilled when their teammates voted to forego the trip, even at the cost of a potential banner victory. Triplett had become very popular and Penn State did not suffer the de facto segregation within its football team witnessed at other northern schools of the era. Triplett's 1947 roomemate, a white lineman named Sam Tamburo, became his closest friend on the team. The Nittany Lions competed ferociously and verbally berated one another on the practice field, but off it a smooth and easy team dynamic evolved in which race rarely factored.

Penn State reaped the reward of their sacrifice a year later when their unity of spirit led the Lions to a 9-0 1947 regular season, including some crushing shut-out wins. Penn State topped Syracuse 40-0 at homecoming in October, holding the Orangemen to a ridiculous NCAA record minus 47 total yards offense! The team clearly deserved a bowl invitation, but race again threatened to intervene. With the Rose Bowl selecting undefeated Big Ten champion Michigan, the best location seemed to be the Dallas-based Cotton Bowl. The Southwest Conference remained segregated and conference rules stated that black athletes could not participate in any game without the consent of both schools involved. An invite would therefore require the blessing of the host tea 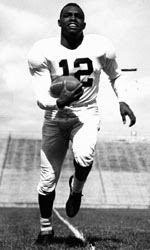 The Nittany Lions had already publically demonstrated their solidarity, making known the fact that they would not travel without their black players. The team waited while the Cotton Bowl and SMU considered the merits of inviting the best available opponent against the possibility of volatile racial controversy. From somewhere the players caught wind of rumors that SMU officials wanted to meet with Penn State counterparts to discuss the matter, but the Nittany Lions felt there was nothing to discuss. Triplett remembers senior guard and captain Steve Suhey exclaiming to teammates:

“We are Penn State. There will be no meetings.”

According to Triplett, this statement evolved into the now famous “We are Penn State” cheer – one of the great spectacles of the college football landscape.

Eventually the Cotton Bowl invited Penn State, black players and all. Because no Dallas hotel would accommodate the racially integrated team the Nittany Lions stayed at a nearby Navy base. But the team was able to enjoy some of the flavor of Texas life. Heading back to the base on the team bus one night several players spotted a busy nightclub and shouted their desire to go inside. Team manager David “Red” Baron spoke with the owner, who realized his establishment could only benefit from the prestigious visitors. Triplett later recalled the man grabbing his elbow as he entered and saying:

“We aint never had no niggers in here, but you come on.”

It proved an enjoyable night, but a cautious Triplett nervously avoided talking with the white girls that flocked around the team. 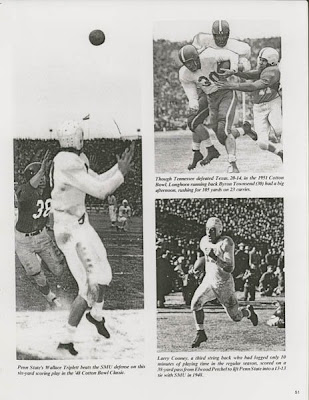 integrated northern guest. SMU’s all-American and future Heisman Trophy quarterback Doak Walker led his Mustangs on an early surge, jumping out to a 13-0 lead mid-way through the second quarter, but Penn State soon clawed their way back. Underrated quarterback Elwood Petchel led a drive culminating in a 38-yard TD strike just before halftime, but time enough remained to require a touchdown-saving tackle from Triplett on the kick return. The second half was all Penn State as SMU gained only 24 yards rushing and 15 passing.

Petchel tied the game in the third quarter when Triplett, convinced he could get open on a corner route, pleaded for a fade to the end zone. His confidence proved well founded. Triplett brought the ball safely into his chest, becoming the first black player to score a major college touchdown in a former Confederate state.

Although a missed extra point left the game an unsatisfying 13-13 tie, even a win would not have delivered Penn State a national title. Notre Dame and Michigan (who trounced USC 49-0 in the Rose Bowl) both had more favored teams. Regardless, the Nittany Lions were a great team in their own right. More importantly, they demonstrated the solidarity, bravery and principle that define football at its very best.

Wally Triplett has always spoken highly of his time at Penn State, but those years were by no means easy. Even in State College, far from the codified “Jim Crow” laws that defined southern society, blacks on campus were not fully integrated and felt the sting of isolation. Unable to room in the regular dormitories in his first years at the school, Triplett lived downtown in “Lincoln Hall” - a black boarding house named after the great emancipator. Triplett refused to calmly accept racist treatment. On one occasion he trapped a professor who consistently gave him failing grades by submitting a paper written for him by a local doctor. The assignment promptly received an F. Backed by hard evidence, an official protest led the administration to later release the professor. But Triplett did not harbor bitterness. Later in life he recalled the era as a different time. Many people faced discrimination, and many took stands against it. He only viewed himself with humility as one amongst the many, a man who accomplished firsts more by the chance of timing than his own personal greatness.

No doubt if Triplett had not made the Penn State team and earned the trust, respect and loyalty of his team mates, some other black player would eventually have broken the Cotton Bowl color line. But that is irrelevant. Wallace Triplett did accomplish those firsts. He was a great athlete and a brave and upstanding man. The Nittany Lions deserve the plaudits of history for the stand the team took years before such actions became fashionable at even the most progressive non-southern institutions.