During WWII major organized sports took an enforced furlough in every participating country except the United States. Soccer teams across Europe temporarily disbanded as players and fans alike headed to war. Even England’s F.A. Cup (association football’s original and most prestigious competition) was suspended after 1939 until 1946. But in America the whole slate continued. World Series champions continued to be crowned, the NFL rolled on, College Football illuminated fall Saturdays as always. Young men went off to war and teams lost much of their best talent, but Americans refused to stop playing their games.

Protected by distance from bombing raids and by agricultural abundance from severe want, American society did not face the fear, chaos and lack that made sports both impossible and unthinkable in Europe. There may be more to Americans insisting upon continuing their games, though. I like to think that Americans are so serious about their leisure time because individually and collectively the country has earned the right to relax in seeming frivolities. Rather than a mere distraction from war, ball games actually provided a potent symbol of the society Americans fought to protect.

It is quite fitting that West Point dominated college football's war years. Commentators often point out the unfair basis of Army’s great dynasty. War provided the Cadets a double advantage. While war-aged players from every college team began departing for training after 1942, the service academies could recruit players from other schools, keep them safely away from the fighting, and offer three more years of eligibility. Army coach Earl Blaik felt no compunctions about att 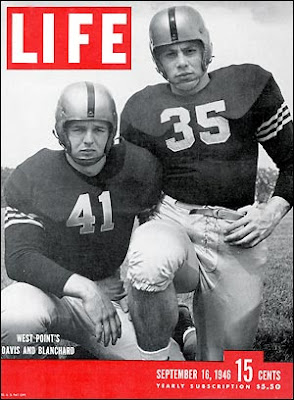 racting experienced talent to the academy and exploiting his advantages on the field.

When bruising 6’1”, 210 lb Fullback Felix “Doc” Blanchard arrived in New York for the fall of 1944 he had already turned heads as a freshman at North Carolina. Blanchard was no boy at age 22, whereas few of the players on teams Army faced were older than 19. The young man who shared accolades with Blanchard in Army’s great backfield, Glenn Davis, was a genuine freshman. A high school sensation in several sports, the lean and lanky Californian headed to West Point as the leading scorer and yardage rusher in his home state.

Facing weakened opposition squads and playing behind the blocking of an equally stacked and mature line the Army backfield exploded on all comers. The Cadets were simply loaded. 6’3”, 220lb monster tackle DeWitt Coulter (a product of Fort Worth’s famed Masonic Home “Mighty Mites”) would go on to notoriety in the professional game with the New York Giants after the war. He, too, was in his mid-twenties. Even though Blaik generally benched his better players after securing an insurmountable lead, refusing to increase the deficit unnecessarily, Army struggled to not score. After having not scored on Notre Dame at all since 1938, two lopsided shut-outs in 1944 and 1945 amounted to 107-0. Army gave up only 35 points in 1944, scoring less than 46 on only two occasions. The following season they allowed only 46 points all year while recording five shut-outs.

In the fall of 1946 veteran players returned from the war looking to avenge the heavy losses the Cadets had handed their schools in their absence. But Army’s dominance continued. Certainly the margins began to narrow a little. Michigan gave a scare as Army needed a grueling 77 yard scoring drive in the fourth quarter to finally wrestle momentum from the Wolverines and secure a 28-13 win at the Big House. But the huge shut outs continued over Oklahoma, Cornell, Villanova and West Virginia. The only blemish on the record of Blaik’s great war-era teams came on November 9th at Yankee stadium, as 60,000 expectant fans witnessed the now infamous scoreless tie with Notre Dame. That game would have been an Army victory as well, but for one last-ditch open field tackle by Notre Dame’s legendary, versatile All-American back Johnny Lujack. Blanchard had broken from the crowd and with nothing but Lujack and 40 yards of daylight between him and the goal a touchdown seemed the most likely outcome. Instead, a perfectly timed and doggedly executed tackle at the knees left Blaik’s record for 1944-46 a not-quite perfect 26-0-1. 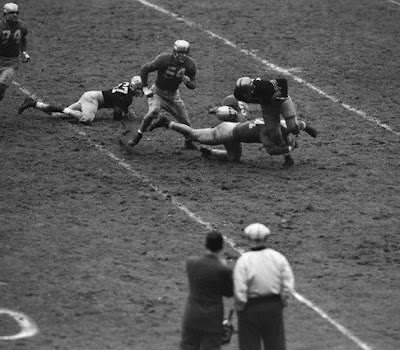 The Cadets won two AP national titles outright in 1944-45 and shared a third with the Irish in 1946. Blanchard won the Heisman Trophy in 1945 and Davis claimed it the following year. The team posted 13 shut-outs in 27 games while averaging over 50 points on offense – a figure that still looks ugly in our age of pass-first, five receiver set, spread offense insanity. In his career Glenn Davis accounted for a touchdown either rushing, passing, or receiving once every nine times he touched the ball. No other college player has come close to that staggering statistic.

Since 1946 Army has not claimed even a shared national title and has only produced one further Heisman winner, Pete Dawkins in 1958. Today Army teams struggle to even register on the national radar. There is no doubt that Army’s wartime success was rooted in the depletion of other programs and the Academy’s temporary monopoly of national athletic talent. But that hardly matters. Fighting a harsh and costly war against Fascism and Militarism to defend the kinds of free societies where people can waste their hard-earned time and money on ball games because they want to, Americans needed comfort and encouragement. And shouldn’t the Army have the best team during war time? 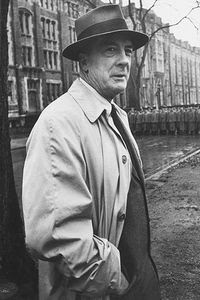 As a uniquely American spectacle, I cherish all the things about College Football that reflect its national character. It is a shame that the modern game has left the service academies behind. Top athletes should be proud and keen to attend West Point or Annapolis. But that’s their decision. Whether Army football will ever be great again I don’t know. Be we can look back with fond smiles and know that when the U.S. Army stood unwavering for the cause of liberty against the Fascist hordes, its football team swept aside all foes in like manner, setting records that continue to stand up against the innovations of the modern game.