General Robert Neyland is unquestionably the Granddaddy of the SEC coaching fraternity. His Volunteers invariably reflected his bullish, bruising and determined character. Even for one-platoon football in the pre-modern era the General’s play book was basic. He insisted on simplicity, running no more than twenty offensive plays to ensure clear headed quarterbacking. In practice Neyland gave more time than any of his peers to the science and timing of blocking. As a result his Tennessee teams racked up 112 shutouts over his thirty-year career. His 1939 Tennessee Vols will forever remain the last major college team to complete a season unscored upon. Neyland never coached anywhere but Knoxville. His legend is therefore inextricably tied to the University of Tennessee's self-image.

Neyland played his football at West Point alongside future notables including Dwight D. Eisenhower. The imposing lineman also won the national collegiate title for heavyweight boxing. This toughness proved invaluable when Neyland was recalled to active duty for WWII at the age of fifty. After almost two decades of college coaching he switched seamlessly back into military life. As a Brigadier-General working in logistics in the South Asia theatre his service earned him an O.B.E – making him the only college football coach decorated by the King of England to my knowledge. 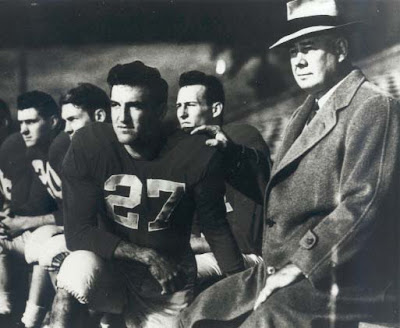 When Tennessee hired Neyland in 1926 his mandate was simple: Beat Vanderbilt. By the time he retired in 1952 he had built a juggernaut so mighty that Vanderbilt would never again even dream of catching their erstwhile rival on the grid iron. Neyland went 173-31-12 in 21 seasons with Southern Conference championships in 1927 and 1932. He claimed a share of his first SEC title in 1939 and won outright titles in 1940 and 1946, either side of his wartime hiatus. He shared his final SEC title with Bobby Dodd’s Georgia Tech in 1951. Five times his teams won at least ten games, including three straight seasons from 1938-40.

The General led Tennessee to five bowls, winning two. Neyland won an AP national championship in 1951 to go along with two earlier titles from other sources. He could easily have won more. In 1950 the Vols beat Texas in the Cotton Bowl while AP champion Oklahoma lost the Sugar Bowl to Paul Bryant’s Kentucky Wildcats.

Despite Neyland finishing his career with an uncharacteristic 13-28 loss to Jim Tatum’s Maryland in the 1952, the General retired with the best winning percentage of any Tennessee coach. His 173 wins in 213 games still hold that record. 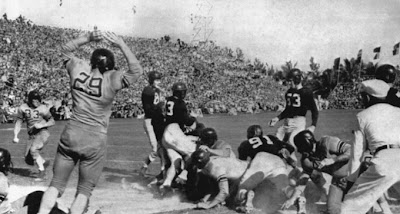 General Neyland was not the first southern coach to achieve national notoriety. The University of Alabama announced the arrival of southern football onto the national stage by winning the Rose Bowl under Wallace Wade on New Year's Day 1926. His successor, Frank Thomas continued the legacy. Though Wade’s Alabama career overlapped with Neyland’s tenure at Tennessee by six years, the schools did not begin playing annually until 1928 (Neyland edged Wade 2-1 over the following three seasons). When Thomas accepted the position to succeed Wade, who had fallen out with the school’s directors and departed for Duke, Neyland’s Tennessee program was justifiably the benchmark for success. Alabama President George Denny left Thomas in no doubt as to his expectations, famously telling him as he offered the job:

Denny needn’t have worried. Thomas grew up in the chaotic hardship of industrial Chicago in the 1890s. As the son of a poor, immigrant steel worker he possessed considerable tenacity. As a prep star he fell in love with football and set himself to learn the art of coaching. He began that process as quarterback at Notre Dame under Knute Rockne. The Irish legend viewed Thomas as one the most intelligent players he ever coached. After arriving at Alabama Thomas unhesitatingly set about installing a version of Rockne’s box offense. The young coach confidently scrapped Wade’s playbook and met with immediate success. In 1931 his first team went 9-1. Naturally, the sole loss was a lop-sided 25-0 beat down in Knoxville. 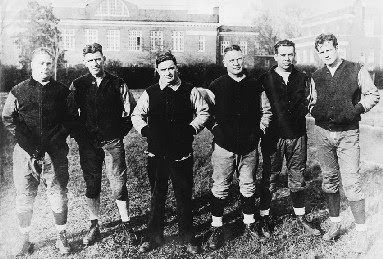 Through fifteen seasons to 1946, when he retired with rising blood pressure, Thomas went 115-24-7. His winning percentage of .812 as an Alabama coach is second only to the Bear. Thomas won the first and second ever SEC championships in 1933 and 1934. Alabama claimed a national championship the latter of those years, going 10-0 and beating Stanford in the Rose Bowl. Thomas' 1945 team went 10-0 but, understandably for the times, every poll voted Army national champion instead. Bama finished that season with a convincing 34-14 Rose Bowl victory over USC. Trojan coach Jeff Cravath said Thomas could have named the score and thanked him for pulling back. Alabama fans have always believed the Pacific Coast Conference began inviting the Big-10 Champion to Pasadena because they were sick of Alabama beating the cream of the West. 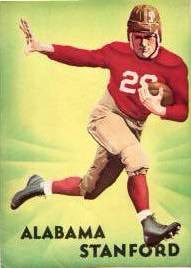 Thomas went 4-2 in bowl games, including two Rose Bowls and victories in his only trips to the Cotton and Orange Bowls. By the time he retired Thomas had built upon Wallace Wade’s foundations to build a football Goliath that more than equaled General Neyland’s Tennessee. Alabama boasted a Rose Bowl record of 4-1-1 with four national championships, compared to Tennessee’s Rose Bowl record of 1-1 and one national title. Between 1933 and 1946 Bama and UT won at least a share of the SEC title a combined eight times at an even four a-piece. The two schools began a rivalry in the Neyland-Thomas years that has continued to dominate southern football. To date Alabama’s twenty-one and Tennessee’s thirteen SEC titles are the first and second most.

At the center of this dominating rivalry is the annual clash simply known as “the third Saturday in October.” In Wallace Wade’s final year the Crimson Tide went 10-0, won the Rose Bowl and claimed national title. Neyland’s Tennessee finished 9-1, losing only to Alabama, 18-6 in Tuscaloosa. The following year, Neyland returned the favor. As Thomas’ first Tide team won 9 with a loss in Knoxville, Tennessee went undefeated with only a tie at Kentucky keeping the Vols from a national title. Neyland and Thomas coached head-to-head ten times, with the General having a 3-6-1 edge. Thomas’ overall record against Tennessee was a healthier 7-6-2 (including the war years and 1935, which Neyland did not coach). Thomas did not have a losing record against any school or coach he faced more than once, except Neyland.

Games between the two schools simply meant more than any other. Seven times in the ten years Thomas and Neyland coached against one another the winner went on to claim the SEC crown. Howell Chappell, Alabama’s left Halfback from 1931-1933 recalled intercepting a pass in Knoxville in Thomas’ first win over Neyland in 1933. Chappell stepped out of bounds and into a crowd of High School boys on the sideline. The boys proceeded to kick the Bama back and, according to Chappell:

“Kicked me all the way to the endzone... They weren’t happy about us winning.”

In 1935 as defending Rose Bowl champions the Crimson Tide were the team to beat, led by the record breaking end play of future pro-football standout Don Hutson. Opposite Hutson Alabama’s “other end” attracted less attention. Paul Bryant caught far fewer balls and had less talent, but never disappointed. The week before the Tennessee game Bryant broke a leg in the first quarter against Mississippi State. He returned in the third quarter and finished the game. He went on to play the following week, refusing to come out until a 25-0 victory was all but assured. Bryant caught several passes in the game, two of which he successfully lateraled and one for a touchdown.

Tennessee always showed the same measure of fortitude. In 1932 the two schools met on a windy, rainy, inhospitable day in Birmingham. Tennessee was undefeated and had not lost once in the two year since Wallace Wade’s last game against Neyland. In treacherous conditions the game quickly descended into a kicking duel. Tennessee’s legendary halfback Beattie Feathers exchanged 23 punts with a 46 yard average for Johnny Caine’s effort of 21 punts of a 43 yard average the other way. Conditions were so bad that several times the teams elected to punt on first down. Alabama had a 3-0 lead in the fourth quarter when Feathers landed a punt in a puddle on their one yard line. Tide Tackle Jim Dildy later regretted that his team did not simply take a safety. Instead, Caine punted. He shanked the ball out at the 12.

With one last chance to win the game Tennessee lined up to run a single-wing play with a center snap to right, but the ball spilled due to miscommunication and Bama collapsed the line. As Tennessee backs tripped over one another Feather dived into the crowd and pushed the ball loose. His teammate Chief Cochise grabbed it, knocked two Tide players down and forced his way into the end zone. Such tenacity, quick thinking and unlikely events were all classic Alabama-Tennessee.

“You never know about a player until he has played against Alabama.”

That continues to be the standard on Rocky top and in Tuscaloosa.

Instinctively, one might think that when great coaches compete, the success of one must necessarily mean the detriment of the other. In head to head games that is certainly true. But in the grander scheme, southern football has never worked that way. As the game grew and rivalries escalated, the stakes crept incrementally upwards. If one school had a General Neyland, the others must find their Frank Thomas. SEC football has always worked that way, with juggernaut programs continually feeding from competition with one another.
That all began in the 1930s on the Third Saturday in every October.