Following on from my post about recent scheduling trends, I want to consider the question of revenue. The gears of my mind started turning recently after noticing one comment responding to a column by Senator Orin Hatch. The comment asked what business the Mountain West had telling the Big XII etc. what to do with ‘their money’?

This notion got me thinking about the question of revenue. Where does college football revenue come from, who generates it, how is it shared and why? Most importantly for this blog - how did we get there?

In all the BCS controversy over the last half-year the whole national championship game discussion has been a red herring. The BCS is primarily a revenue sharing system. The #1 vs. #2 title game is the lipstick on the revenue sharing pig.

I have not found any source as informative on all these questions as Keith Dunnavant’s book The Fifty Year Seduction: How Television Manipulated College Football, from the Birth of the Modern NCAA to the Creation of the BCS. I consider it to be required reading for any informed football fan. It is a meticulously researched and fabulously detailed eye-opener. 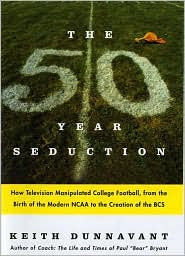 Dunnavant takes the story back to the NCAA's growth from a tiny organization with a handful of employees. He shows how completely dependent it originally was on football revenue. The annual TV contract, run as an absolute monopoly, was negotiated centrally and sold to the highest bidder. The money was shared equally among division one schools. Only one game a week was televised. Fans had no choice and the most popular programs had no independent access to TV rights and coverage.

As college football grew in scale this relationship began to tear. The first major change came with the division 1 spilt in 1978. But the more prominent football powers were still not satisfied. Some, like Notre Dame with their long established national radio following, chafed under the system. They felt that they could generate far more alone, trading on their own mystique and appeal, than by relying on collective bargaining power to drive up prices.

After years of discontent and discussion, the landmark 1984 Supreme Court ruling Board of Regents vs. NCAA smashed the monopoly. The enormous slate of televised football we have today is the result. But initially, the glut of available products depressed the market. For over a decade reduced prices and starving athletic departments fought to recover the golden goose they had seemingly slaughtered with the monopoly. Dunnavant locates the creation of the BCS within this process, showing how worried and hurting schools with massive football-driven athletics departments replaced one monopoly with another.

My summary cannot possibly do Dunnavant’s work justice. He goes into detail as to how ABC created modern TV football coverage. He reveals intricate human stories as to how deals were cut, and why. Most importantly, he writes with nuance, intelligence and impartiality. No doubt many readers would take the insightful detail in the book and view the story differently than I do. The bottom line is, this is an invaluably informative work. However the reader feels about TV revenue, the NCAA and the BCS, this is a must read.