My last post recalled the Big Eight glory days of the OU-Nebraska rivalry. On November 7th 2009 the Sooners and Huskers played out a depressing 10-3 Nebraska win which featured a single touchdown, scored on a drive of one yard. The game will not enter the cannon of great and memorable meetings in this storied series. Both the 2009 Huskers and Sooners have had their problems at the quarterback position while fielding first rate defenses. It wasn’t surprising that the game proved a less-than appetizing spectacle of mutual offensive inertia. Naturally every great rivalry series will occasionally provide an underwhelming spectacle. That in itself is not a problem. The sad fact about this game is that Oklahoma will not play in Lincoln again until 2013. Since the inception of the Big XII the OU-Nebraska series has only been played two of every four years. Season ticket holders in Lincoln and Norman only enjoy the opportunity of seeing their erstwhile rival as often as they can vote for who resides in the White House. That, in my opinion, is a travesty.

So what ever happened to the OU-Nebraska game?

During the 1984 off-season the U.S. Supreme Court heard and ruled upon a land mark case launched two years earlier to challenge the NCAA’s centrally negotiated television rights monopoly. Board of Regents of the University of Oklahoma vs. the NCAA proved to be college football’s Brown vs. Topeka. This decision combined with the growing number of channels available to American television sets via cable to pave the way for the near-saturation point levels of exposure enjoyed by the game today. Most importantly, the decision gave individual schools and conference the rights to control and distribute the revenue their games generated. This revolution turned the historical rationale for conference alignments on their heads. Geographical cohesion, natural rivalries, travel costs, institutional bonds and any number of factors that had created and sustained conferences through the mid-1980s were increasingly marginalized as the golden calf of TV revenue grew larger and demanded ever greater sacrifices.

In 1991 the SEC expanded to 12 teams in order to take advantage of a previously over looked NCAA by-law stating that a conference of twelve teams might form into two divisions and create a football championship game. Conference commissioner Roy Kramer saw an opportunity for a high profile game with unparalleled revenue generating capability. He was exactly correct. The SEC set a decade of conference musical chairs in motion after the 1991 season by extent ending invitations to independent South Carolina and long-time Southwest Conference member Arkansas. An ongoing dispute over the school’s radio broadcast and revenue rights made Arkansas administrators only too eager to bolt. This realignment immediately produced two unintended consequences. Firstly, it showed other schools and conferences the immense financial and publicity value of the two-division, championship game format. Secondly, it rendered the SWC an irrelevant, parochial conference geographically rooted in the local identity and tangled political life of a single state. 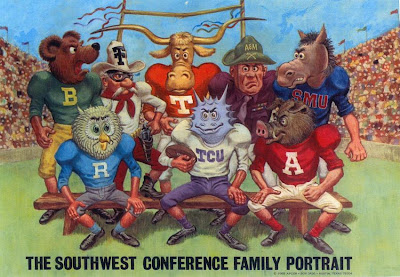 From the late 1960s onwards a cycle of cheating involving recruitment violation and payment of players infected the entire SWC. Struggling conference rivals attempted to keep from slipping too far behind the increasingly powerful Longhorns and Aggies. Eventually these unscrupulous practices unraveled the entire league. After the NCAA handed SMU’s football program a one-year suspension for the 1987 season boosters at various schools began a sordid retaliatory process of mutual muckraking that reduced the league to an utterly discredited public family feud. Once Arkansas departed UT chancellor William Cunningham began to explore the possibility of following suit. Despite initial flirtations with the academically alluring Pac 10 and Big 10 the most logical choice was the Big Eight. Conversations began primarily with the athletics director of longtime non-conference rival Oklahoma Donnie Duncan. With the model of the SEC’s lucrative expansion as a guide an agreement emerged by February of 1994 to marry the Big Eight with the four largest and most politically influential Texas universities. ABC’s initial contract with the new Big 12 was worth a base $90 million over five years with an extra $10 million incentive to add a championship game. The league obviously possessed the super-regional appeal that the SWC had long since lost.

Conference realignment, the conference championship format, and an increasing volume of nationally televised games through a growing entourage of cable network partners ushered in a new era for college football. Naturally, and perhaps fittingly, many aspects of the game’s former landscape changed. Conference commissioners and school administrators had to balance the weight of history and tradition with the generally more weighty imperatives of garnering the public interest and athletics revenue necessary to sustain competitive advantages. 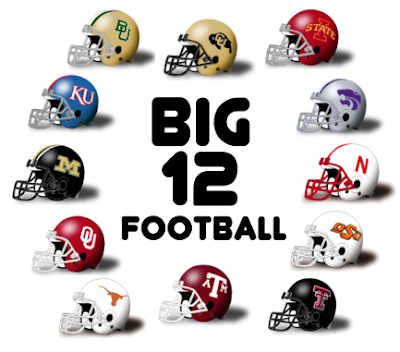 For the Big XII, the two division format added a championship game and created a juggernaut conference of national consequence. But it also involved a geographical divorce for the old Big Eight. Moving OU and Nebraska to different divisions meant potentially losing an annual series that had provided some of college football’s most memorable games and largest television audience. In the SEC several schools refused to allow realignment to disrupt the history of their most important annual fixtures. In order to maintain the Auburn-Georgia and Alabama-Tennessee rivalries the league created four other annual inter-divisional series. This balance the mathematics of an eight game regular season and maintained the fixtures that created the most local and national interest in the league.

Why did the Big XII decide not to pursue a similar option in order to maintain the OU-Nebraska series? I recently discussed this question with Daily Oklahoman columnist Barry Tramel, an outspoken advocate of restoring the OU-Nebraska series to an annual fixture. According to Tramel the old Big Eight rivalry posed two major problems for the new conference alignment. Firstly, the game had traditionally been scheduled for late November since it almost invariably constituted a de facto conference championship play-off. In that slot the fixture garnered enormous national interest and large TV ratings. The new two-division format generated the distinct possibility Nebraska and OU would meet one another in the conference title game not infrequently. In that case a regular season fixture in November would lose the winner-takes-all relevance that had long made it a national staple.

Secondly, in the mid-1990s little appetite for maintaining the series existed in Norman. The possibility was raised of playing the game as a non-conference fixture on the two years of every four that the schools did not meet in conference play. Nebraska lacks a natural geographic rival and over the long history of Cornhusker football only Oklahoma has provided an annual game against an equally weighted powerhouse. Naturally folks in Lincoln wanted to maintain the annual meeting. But times were hard for OU, which had not won a conference title since 1987. NCAA sanctions and negative publicity resulting from recruiting violations and several high-profile player arrests led to Barry Switzer’s tumultuous and bitter departure in 1988. From 1989 to 1994 Gary Gibbs posted an unimpressive 44-23-2 record with only a single win over each of Nebraska and Texas. 1995 brought the disastrous single season tenure of the fossilized Howard Schnellenberger. John Blake failed to right the ship from 1996 to 1998 with an inglorious 12-22 record. While the 1990s were nothing but unkind to OU Tom Osborne’s Cornhuskers won seven conference and two national championships. Offered an opportunity to drop the Huskers from the schedule two of every four years, Donnie Duncan jumped at the chance. The Big XII replaced OU on Nebraska’s annual November slate with Colorado, the only other team from the old Big Eight that might even attempt to claim anything like national prominence. Suffice to say that this annual rivalry game has thus far failed to match the glory years of the OU-Nebraska series.

Despite his columns appealing to the weight of tradition and the spirit of competition, Tramel does not see any momentum for the idea of restoring the series. Short of adopting Oklahoma State coach Mike Gundy’s highly unpopular and wildly unrealistic suggestion of an eleven-game, round-robin conference schedule [which would obviously mean eliminating the lucrative championship game for which the conference was initially created], there is no chance that OU and Nebraska will play annually anytime soon. 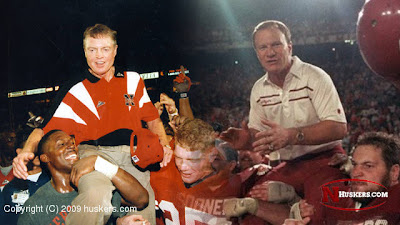 Board of Regents vs. NCAA and the explosion of television coverage for college football that followed have, largely speaking, been good for the game. They have certainly been good to fans, who can now see almost every game of any significance nationally televised somewhere on their dial. But no transition between historical eras is ever without cost. The Big XII omelet involved the breaking of several proverbial eggs. The messy divorce of the old SWC has made life very difficult for several of the former member schools not fortunate enough to be taken along to the new Promised Land.

By comparison to the continued struggles of the football program at once-proud SMU perhaps the downscaling of the OU-Nebraska series is a relatively minor consequence. But anyone who remembers the days when the Big Eight's two great colossus programs perennially crashed into one another at the business end of the AP poll is likely to disagree.