Stanford rolls in the Coliseum

Stanford and Southern Cal can only be called rivals in the strict sense that they have always shared a conference and played one another annually. Decade after decade the on-field disparity between the two schools’ football prowess and aspirations could hardly be greater. Thirty-eight times USC has earned at least a shared conference championship. Stanford has managed only twelve, ten of those coming before 1970. USC holds a lopsided 58-26-3 series lead. Prior to 2009 Stanford had managed to win on consecutive visits to the Coliseum only three times. In contrast the Trojans longest streak without a loss in the series ran to almost two decades. USC defenses have held Stanford scoreless on fifteen occasions – more than one of every six meetings. Stanford has not shut out USC since Hitler invaded Russia. Only five times have Stanford teams breached the 30 point barrier against the Trojans, with one of those coming in a loss. Trojan teams have, over the years, taken Stanford to the woodshed not infrequently. 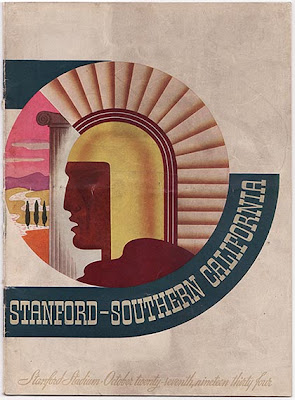 On 9 November 1957 the Stanford Indians rolled into Los Angeles and hung a 35-7 thrashing on USC. That win stood as Stanford’s best over the west coast’s most dominant football power for over half a century. The win would have been as unlikely as ever had the Trojans not been under major Pacific Coast Conference sanctions for flagrant violations of league scholarship rules. The PCC, formed in 1915, had a strong constitution and a powerful commissioner to penalize transgressions. The NCAA had virtually no enforcement power in those days. Each conference set different scholarship, recruitment and eligibility boundaries and enforced them how they saw fit. In the early 1950s the PCC members gave athletics scholarships in the form of grants equal to the cost of tuition. The league allowed up to sixty such scholarships to come directly from regular institutional funds but additional scholarships could be given with money raised specifically for the purpose. Players could also earn money through work programs with remuneration limits set at $2.00 an hour not to exceed a total of $100 per month. Money raised for athletics scholarships came through organized booster club accounts.

Evidence that the University of Oregon athletics department had allowed booster club payments to players exceeding the league's limits forced the resignation of head coach Jim Aiken in 1951. Five years later Oregon officials reported similar payments at rival UCLA. Investigations unraveled a web of scandal inculcating most of the conference members in illegal payment schemes channeled through shady booster which reported only a fraction of their payments. Through the 1956 off-season PCC investigators turned up evidence that the activities of UCLA’s “Young Men of Westwood” organization, UW’s “Greater Washington Advertising Fund,” USC’s “Southern California Educational Foundation” and Cal’s “South Seas Fund” amounted to little more than unrestricted slush funds. Harsh penalties followed for the schools involved, accompanied with ongoing acrimonious protests from California schools which argued that a higher cost of living in Los Angeles and the Bay area necessitated additional aid that inflexible conference rules did not permit. The ill-will created eventually caused the PCC to disintegrate. In 1959 the four California schools and Washington began a new affiliation in the Athletics Association of Western Universities, which lacked any formal enforcement mechanism beyond an institutional honor code and did not require every member to play each of the others. Eventually every former PCC member except Idaho joined the AAWU and formed the Pac-Eight, but the league remained little more than a loose affiliation of mutually distrustful programs until well into the 1970s.

Unsurprisingly, squeaky-clean and academically rigorous Stanford was the only California school in the PCC not 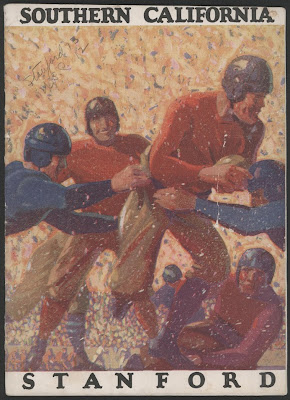 Penalized for scholarship rule violations in 1956. USC, Cal and UCLA were banned from accepting bowl bids for several years and lost key players to ineligibility rulings. In 1957 Don Clark returned only 15 of 34 lettermen from his 8-2 team of the previous year. The Trojans’ starting lineup was decimated by the loss of virtually every skill player. If there ever was a year for the Indians to score a big win over their perennially merciless big brother, this was it.

Stanford coach Chuck Taylor was a gentleman and an optimist. He accepted the job in 1951 more because he loved Stanford than from any personal ambitions to coach. Taylor never held another job and coached in Palo Alto only seven seasons. As a player he had been an all-American guard and captained Stanford’s 1941 Rose Bowl team to victory over Nebraska. His first Stanford team as coach started 9-0 before dropping the two games that really mattered – Cal and the Rose Bowl against Illinois. None of Taylor’s subsequent teams enjoyed such success, two 6-3 campaigns constituting his high watermarks thereafter. He later served as athletics director, overseeing another Stanford Rose Bowl trip. Even in the late 1950s Taylor faced the problem of academic eligibility in an intellectually rigorous environment. He could only recruit the players who, like him, truly wanted to be at Stanford. Unlike coaches in Los Angeles, Taylor could not easily replace stars. After the graduation of all-American John Brodie, the school’s record setting passer, Taylor had to return to more conservative game planning. First year starting quarterback Jack Douglas could throw down field if necessary but was best utilized as a runner in a well populated backfield. Taylor told reporters before the season that despite graduating two all-Americans, losses of rare magnitude for any Stanford coach, he felt his team’s offense would be better. He was right. Though Taylor’s team stood at only 4-3 heading in to Los Angeles on 9 November they had plenty of competent runners on the roster and employed end-around and pitch-out runs successfully from a Spread-T formation [not entirely unlike the modern spread-option]. The Indians made yards on most of their conference rivals, especially the ones reeling under league sanctions. 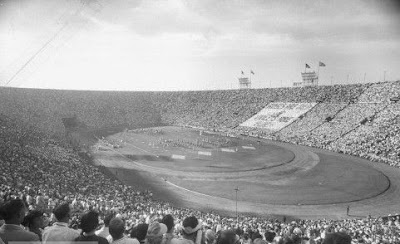 Like Taylor, Don Clark coached his alma mater. He had been a successful but not outstanding guard and had played two years of pro football with the San Francisco 49ers after serving in WWII. Also like Taylor he only ever had one head coaching job. He began as an assistant at Navy in 1950 before moving back to USC to work for Jess Hill in 1952. With controversy swirling around the program in 1957 Hill “moved upstairs” to become USC athletics director. It seems strange that a coach leading a program coming under punishment for scholarship rule violations should be promoted to AD, but university administration firmly believe no wrongs had been committed and that the fault lay with unfair enforcement of misguided league standards. That was all well and good for Hill, but on the field Don Clark was left holding the baby. Clark’s three years as Trojan coach included two of the program’s worst. Losing players to ineligibility rulings and without the lure of a Rose Bowl trip to promise recruits Clark struggled. His first team finished with a pitiful 1-9 record. Little wonder he decided to return to his family business in 1960 and never went back to coaching.

The USC team Stanford faced on the field in the Coliseum in November 1957 was not cut from the usual Trojan cloth. Starting center Ken Antle had played only 44 minutes during the previous season, which was fairly typical. Halfbacks Tony Ortega and Rex Johnson were large enough, but lacked elite speed. The Trojans had won their first game of the season 19-12 the preceding week on the road against equally underwhelming 1-4-1 Washington. No one was surprised when Stanford’s more experienced line and faster backfield ran all over Southern Cal.

Before a homecoming crowd of over 50,000 the Indians refused to play the part of obliging visitor and put on a workshop in classic 1950s football. Occasional underneath passes to backfield members served primarily to augment the multi-faceted running game. Fullback Chuck Shea, the PCC’s leading rusher, made 77 yards on the ground with a 6 yard touchdown run. Jack Douglas’ passing figures were competent but far from eye-catching. He went 10 of 16 for 85 yards with his most impressive stat, a 12 yard touchdown strike to future Dallas Texan wide receiver Chris Burford, coming after a third quarter USC fumble that allowed the Indians to ice the game.

For most of the afternoon Stanford was methodical, not aggressive. The Indians made 21 first downs to the Trojans’ 15. They opened the scoring with a first quarter 67 yard drive. USC answered immediately, capping a 76 yard, eleven play drive early in the second quarter with a twenty yard strike from quarterback Willie Wood to end Don Voyne, the only passing play of the drive. At that point it looked as though the two teams might trade blows all day, but Stanford dug in and from that point the difference in depth between the two squads showed. The Indians held Wood to only nine completions in twenty-two attempts for a total of ninety-four yards and two interceptions. The Trojans added 168 yards rushing but lost a crucial fumbled inside their own twenty when they could not afford to give up another point.

Seven points in the first quarter and fourteen in both the second and third put the game beyond doubt. Trojan tempers were obviously frayed and late in the final quarter a fracas erupted on the USC sideline that resulted in the ejection of USC’s Walt Gurasich and Stanford’s Don Dawson. No doubt receiving convincing home-field thrashings from perennial underdog Stanford was as much fun for Trojan lettermen in 1957 as it is today. Tempers flared between Pete Carroll and Jim Harbaugh after the 2009 meeting over the Stanford coach’s decision to try a two-point conversion in order to crack fifty points with the game already beyond reach. No matter how many years pass and how personnel may change, it is unlikely that USC will ever take a home loss to Stanford as anything other than an unusual and highly frustrating occurrence.

Luckily for USC fans they probably won’t have to get used to the feeling. Jim Harbaugh is fielding job offers from all corners and will likely move on at some stage in the not-too-distant future, while battering-ram running back Toby Gerhardt will almost certainly be giving the most articulate interviews in the NFL next fall. The 2009 Cardinal fielded Stanford’s best offense ever – better even than their efforts with John Elway in the backfield. Stanford fans should enjoy it while they can. The 2010 Cardinal will likely be a lot worse and the chances of the university beating USC by thirty again in the next five decades are probably not brilliant. 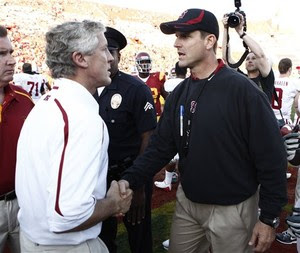 "How do ya'like them apples, coach?"
"I dislike them very much, coach."