Coaches and the culture of Notre Dame, part 2: "He's running what?!"

During April of 1930 Notre Dame head coach Knute Rockne and would-be senior tackle Frank Leahy spent two bed-ridden weeks side-by-side in the Mayo Clinic. Rockne had missed much of the 1929 season due to several health issues including a leg ailment. Despite Rockne’s partial absence, his finely-tuned and thoroughly prepared team went undefeated and earned his third national championship. Leahy, a three-year letterman, hoped to contribute to a fourth championship as a senior. Unfortunately he badly injured his knee during spring drills, ending his playing career. Leahy was only average in size but always showed an iron will on the field, playing with an aggressive determination that caught the attention of his coaches. His mind for the game certainly impressed Rockne. As the two men convalesced, Leahy questioned his coach on every aspect of the game, picking his brain for knowledge and insight. Recognizing the young prodigy’s passion and latent talent, Rockne named him a student assistant coach the following season — a repeat national championship campaign.

Leahy was enamored of Rockne’s ability as a coach. He well knew the value of his coach’s experienced views on motivation, alumni relations, player management, tactics, and any number of other topics. But Leahy also possessed a self-assured confidence in his own abilities. As he grew into his own coaching career he did not become a slave to the Rockne mystique. Eventually that helped Leahy to be the first of only a handful of Notre Dame coaches to live with any measure of success in Rockne’s shadow. 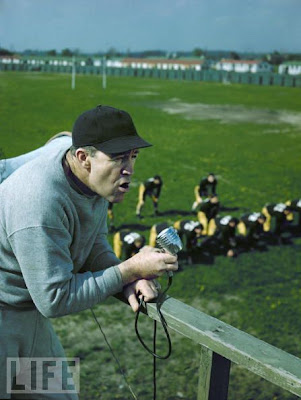 After graduation Leahy spent a decade as a line coach, first at Georgetown and Michigan State, and at Fordham from 1933 to 1938. Fellow Notre Dame alumnus Jim Crowley [one of the famed four Horsemen] led some great Fordham teams in the later thirties that were noted for their fierce line play. While in New York, Leahy also passed the Rockne coaching torch on to future NFL legend Vince Lombardi, one of his most outstanding linemen. By 1939 Leahy’s resume was strong enough to earn a head coaching position at Boston College. Leahy wasted no time in leading the Eagles to their first ever bowl appearance, a narrow loss in Dallas' Cotton Bowl to Clemson. The following year Leahy's team went a perfect 11-0, claiming a national championship by beating General Robert Neyland’s Tennessee Vols in the Sugar Bowl. Boston College would not win another championship of any form until 2004.

While Leahy was busy leading the Eagles to preeminence in the East, his alma mater was enjoying far less notoriety under eighth-year coach Elmer Layden. Seven successful seasons with an overall win percentage of .724 at sister Catholic school Duquesne seemed to qualify Layden as successor for the disappointing ‘Hunk’ Anderson. His credentials as a noted former Rockne player didn’t hurt, either — Layden was another former horseman. Unlike the unpopular Anderson, Layden was likeable. He maintained good alumni relations and promoted the school’s image tirelessly. He even managed to heal a rift with the University of Michigan over scheduling that had lasted more than twenty years. Perhaps more importantly, Layden gave Notre Dame backers what they expected by continuing Rockne’s offense and offering virtually no innovations of his own. 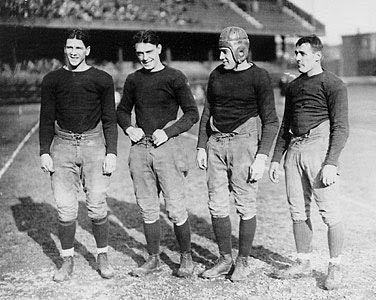 "Outlined against a blue-grey October sky, the Four Horsemen rode again." Layden is first on the left.

Layden’s approach was hardly a disaster. After his initial 6-3 campaign his teams never lost more than two games in a single year. He stepped down after the 1940 season with a solid .726 win percentage. Layden's teams rarely lost to Notre Dame’s principle rivals [Army, Navy, and USC]. But making few mistakes is, unfortunately, not the right formula for succeeding Rockne. Layden’s tactics were cautious and outdated. While the talent available at Notre Dame and solid execution of fundamentals could carry any Irish team past most of the opponents on their annual slate, good coaching from more innovative opponents caused serious difficulty. In his final season Layden’s team reached 7-0 and earned undeserved acclaim before finally coming unstuck at home against Iowa in mid-November. Even without 1939 Heisman winner Niles Kinnick [who had entered the navy as a pilot] Eddie Anderson out-coached Layden, leading his Hawkeyes to a one-touchdown upset victory. The following week Notre Dame lost 20-0 at Northwestern and Layden began to feel enormous pressure. Finishing the season with a road win at Southern Cal did not prevent university vice-president Father John Cavanaugh from listening to rumbles of discontent emanating from influential ND backers. Immediately following the season Cavanaugh sent Layden’s assistant Chet Grant on a scouting mission to New Orleans.

Grant observed the Boston College Eagles in practice and attended the Sugar Bowl. Despite his position as assistant coach Grant only wanted the best for his alma mater and recommended that Cavanaugh hire Frank Leahy. Knowing it would cost him his own job, Grant reported:

“Boston College out-smarted, out-charged, out-stayed probably the best team in the country in as well-played a game as I ever saw. Boston College showed me things I didn’t think could be done… I became convinced that Leahy is a coach of destiny.”

Grant was right on two counts. He did lose his job when the new staff came in to South Bend, and Leahy was indeed a coach of destiny. His eleven seasons at ND brought in four national championships. Leahy retired after the 1953, utterly exhausted by his frenetic perfectionist approach, with a head-coaching record of 107-13-9. His win percentage of .864 remains second only in the history of college football to the .881 mark of Knute Rockne himself. 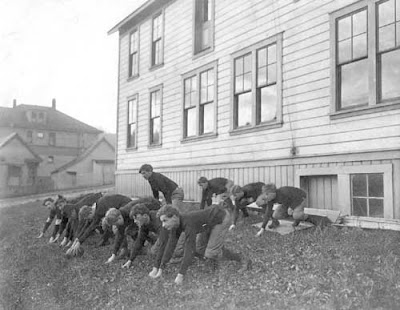 Leahy’s first season was an unbeaten campaign blemished only by a scoreless tie with Earl Blaik’s Army Cadets. The gifted, indefatigable and soon-to-be legendry coach gave every indication of his ability to live-up to Rockne’s legacy. Fans, alumni, and boosters voiced their confidence and joy. But that goodwill and the credit earned in an undefeated freshman season garnered seemed to evaporate when word leaked that Leahy intended to sacriligiously discard the ‘Notre Dame Box’ offense the following season. During spring practices Leahy began work on installing the new T-formation, used to great effect by the Chicago Bears in their stunning 73-0 destruction of Sam Baugh’s heavily-favored Washington Redskins in the 1940 NFL championship game.

The Box was Rockne’s variation on the “shift” scheme engineered by the original football innovator Amos Alonzo Stagg. The story of the shift reads like a star-studded overview of the early history of football. The system revolved around a series of pre-snap backfield movements decided at the line of scrimmage according to what the offensive signal-caller saw from the defense. Stagg was nothing if not creative. As a leading member of the collegiate game’s rule committee he was quick to embrace the new forward pass in 1906, 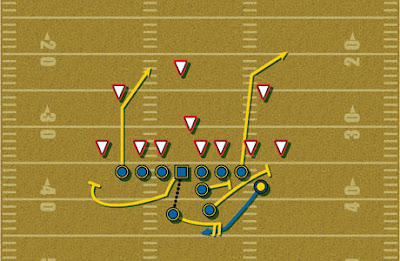 drawing up a host of new plays to the delight of his University of Chicago coaching staff. Jesse Harper, a young graduate assistant, learned Stagg’s new scheme and took it with him to Notre Dame when he became head coach there in 1913. The game’s East Coast establishment and press were always more conservative than Stagg and remained skeptical toward the forward pass. Harper shattered that conservatism one historic day in Yankee Stadium. He spent his first pre-season in South Bend practicing forward pass plays with his backfield starters. On November 1st 1913 Notre Dame travelled to New York and stunned a highly-rated Army team, winning 35-13 on the strength of several deep passes from Gus Dorais to Knute Rockne. Later as Harper’s assistant Rockne adjusted Stagg’s shift patterns, dropping the halfback a few feet from the line's unbalanced strong-side to a more flexible backfield position. In Rockne’s system the four backs lined up in a square [or 'box'] pattern and could shift quickly to pass or run to either the strong or weak side. This system was complex, requiring excellent coaching and rigorous practice. Notable Irish alums who learned the Box playing for Rockne included Culry Lambeau, the founder and inaugural coach of the Greenbay Packers, and Frank Thomas, the Wallace Wade's heir at the University of Alabama. Thomas coached several greats at Alabama, including the young Paul “Bear” Bryant and his teammate Don Hutson, who set numerous NFL receiving records out of the Box system playing for Lambeau’s Packers.

Rockne’s tactical scheme saw widespread success and was clearly endorsed by some eminent football greats. Little wonder therefore that no one at Notre Dame thought about changing philosophy for more than a decade after his death. Even while complaining of Layden’s increasingly ineffective, predictable and stodgy teams, no one in South Bend seemed to view the system as the problem rather than the man. The truth was that, like all systems, the box offense had a limited lifespan and inevitably good defenses caught up. It took a man possessed of Leahy’s vision and iron will to see that fact and act accordingly.

In the new-fangled T-formation Leahy’s Fighting Irish opened the year with a 7-7 tie at Wisconsin before losing their home-opener to a Georgia Tech team that eventually finished an unimpressive 3-6. Critics willing to double-guess Leahy came out in droves to howl at his foolish audacity in adopting an unproven offense. Backers clamored for a return to “Notre Dame football” and the following week, despite a convincing win over Stanford, Leahy checked into the Mayo Clinic suffering from “extreme nervous tension”. 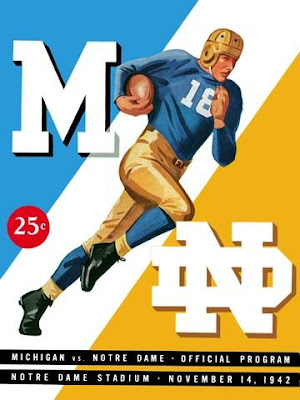 following season. By the time he retired Leahy had cemented an unquestionable legacy of coaching greatness. Furthermore, the T formation had surpassed Glenn “Pop” Warner’s ‘Single Wing’ variation on Stagg’s shift as the most widely used offense system in football. No doubt few if any of Leahy’s conveniently forgetful critics ever publically ate any humble pie.

Following another disappointing 6-6 season in 2009, Notre Dame parted ways with Charlie Weis. They replaced him with Brian Kelly, erstwhile head coach of the University of Cincinnati Bearcats. Kelly is an unapologetic devotee of pass-first variations of the spread offense. Recent Notre Dame teams have struggled with numerous problems, but among the more prominent and painful to watch has been an embarrassing inability to run the football. No small amount of nay-saying skeptics on Irish internet chat-boards — which are rarely noted as gathering places of rational, far-sighted individuals — are asking whether Kelly’s scheme is the best way forward for an offense that already can’t run five yards against Powder Puff defenses.

Pass-first spread offenses aren’t my personal cup of tea, and there are plenty of reasons not to like Kelly's system; but the man's resume isn’t one of them. After two decades as a head coach and two upward moves to higher level jobs Kelly owns a .747 win percentage with an overall record of 171-57-2.

My money is on an Irish revival.