Line it up and run it

Three minutes into the second half on a sunny late-September afternoon in 1995 at Notre Dame Stadium, University of Texas sophomore quarterback James Brown approached the ball on his own twenty-two yard line. His Longhorns trailed 13-19 after a first half featuring plenty of offense from both teams. There was plenty more to come. The exciting dual-threat Brown led his team on a seventy-eight yard scoring march to take a 20-19 lead. Texas’ defense answered with a stop to give Brown the ball back and momentum appeared to be shifting toward the ‘Horns. But after moving the ball just inside field goal range a huge sack put Texas in a second-and-seventeen situation stranded in no-man's land. On the next play receiver Justin McClemore dropped a pass that would have gained the yardage back. On third down Brown forced a careless pass toward Mike Adams and was picked off at the Notre Dame twenty-eight yard line. The Irish responded emphatically with a four play, one minute drive to the end zone that started a deluge. Randy Kinder's three-yard scoring run was the first of five Irish touchdowns in the game’s final twenty minutes. Texas managed only one sustained drive in the final period and crashed to a 55-27 defeat.

Explanations for the Texas loss were plentiful. The nation’s seventieth ranked rushing defense entered the game with its leader, defensive end Tony Brakens, suffering a fractured tibia and listed as a definite non-starter. In the event Texas head coach John Mackovic decided that with only a fifth-year senior who had never forced his way into the starting line-up to call on as backup, Brakens would have to play. Brakens ended the day with three quarterback hurries, equalling the total contributed by the rest of the defense. A unit that relied so heavily on contributions from walking-wounded could hardly be expected to contain a running back in Kindler who entered the game averaging 7.2 yards a carry. Kindler went on to finish the season with 809 yards. His fellow running back Autry Denson added 695, and fullback Marc Edwards contributed 717. This imposing three-man rushing rotation followed the lead of highly touted signal caller Ron Powlus, whose eventual season totals of 1,853 yards and twelve scores on a 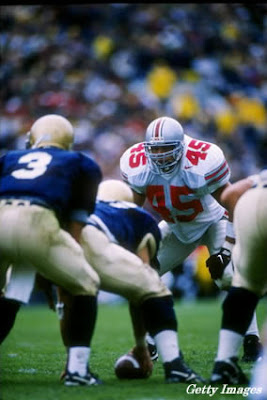 60% completion rate prevented opposing defenses from simply loading the box. That backfield playing behind a solid line led by Dusty Ziegler, a senior center later drafted by the Buffalo Bills, made the Irish offense a force to be feared. Only in their opening loss, a two-point upset against eventual Big-10 champion Northwestern, did the Irish score less than twenty points all year. Little wonder that Notre Dame compiled 249 team rushing yards on 55 attempts against Texas. Powlus only threw the ball twenty-eight times, but completed sixteen for 273 yards and two scores with only one interception. Notre Dame exposed Texas’ defense. They did no less to several others before January.
The Texas defense ranked only fifth amongst Southwest Conference members through two games despite the ‘Horns having played two teams in Pitt and Hawaii that had gone 3-8 the previous season. But on the other side of the ball Texas had plenty to boast about. They traveled to South Bend ranked no worse than third in the Southwest Conference in passing, scoring, and total offense. Notre Dame defensive coordinator Bob Davie noted Brown’s 6-0 career records as a starter and praised Texas’ offensive chemistry to reporters. In his post-game interview Davie summarized his team’s preparations, saying:
“Our whole thing coming in was that we didn’t want this to turn into a track-meet.”
In the end only Texas errors prevented that outcome. Despite the lop-sided final score Notre Dame only outgained the Longhorns by ninety-yards, 511 to 422. All of those extra yards came in the final twenty minutes, aided by two Texas interceptions and a lost fumble. During the first period Notre Dame had taken a 10-0 lead on a sixty-four yard punt return from Emmet Mosley. The last points of the half came from a blocked PAT which Allen Rossum returned eighty yards. Even with those mistakes the ‘Horns might have led at the break had Brown not lost a fumble on the Irish seventeen early in the second quarter. The half ended on a high snap that ruined a field goal attempt with only three seconds remaining. Through four quarters a combined four picks, two lost fumbles, and twelve points given up or thrown away on special teams nullified the impact of over four hundred yards in offensive output. 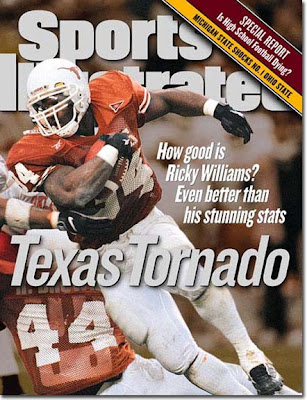 Only one Longhorn produced a flawless performance. Freshman running back Ricky Williams carried the ball fourteen times for seventy-three yards [a 5.1 yard average] and a touchdown. In only his third game as a Longhorn Williams had yet to assert himself as the central cog in Texas’ offensive engine. Mackovic preferred to keep his game plan balanced, hoping to outsmart his opponents as much as outmuscle them. Without doubt there are times and places for clever strategy and occasional trickery in football. But more often than not, coaches establish legacies of greatness because they recruit, manage, motivate, and utilize the best talent in the most effective way. As the old adage goes, no one ever won the Kentucky Derby on a mule. Even one month into his freshmen year it was clear that Ricky Williams was a stallion. Clear to all, that is, except Mackovic.
Texas rushed the ball thirty-seven times against Notre Dame and passed thirty-seven times: perfect balance. The 'Horns gained 178 yards from scrimmage on the ground and 335 passing . Even with five sacks costing most of the team's seventy-seven negative rushing yards the passing game was not unsuccessful in terms of raw offensive output. Mackovic clearly felt confident enough to stick with his game plan. Unfortunately, he continued to do so after the tide began to turn against Texas. Brown carried a shoulder injury into the game, and though he claimed afterward to have felt no discomfort his passing numbers diminished progressively. He hit one receiver, Mike Adams, five times for 141 yards in the first half alone but failed to find him once after the break. The second half disintegration of Texas’ passing game finished symbolically on a twenty-nine yard pick-six with forty seconds left on the clock. Only twice in the second half did Texas sustain field-length drives; Notre Dame seemed to march at will. Texas held the ball almost exactly fifteen minutes during the first half, losing the time of possession battle by less than a minute. The ‘Horns also converted four of nine third downs. After the break time of possession fell to barely eleven minutes, and third down conversations fell from nearly fifty percent to less than a third at two of seven. As an offensive battle in which two ranked teams combined for nearly a thousand total yards wore on, Mackovic's balanced strategy floundered. A declining completion rate from his quarterback put his team in third-and-long situations and resulted in turnovers. 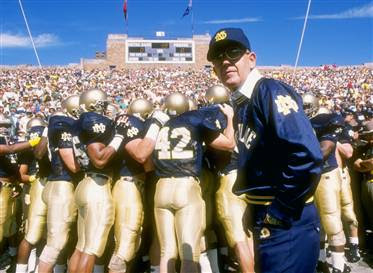 After the game Lou Holtz praised Ricky Williams and stated that if he had the use of such a talented back he would put the ball in his hands just about every down. In fact that is basically what Holtz did with the perfectly capable backs in his own stable. Notre Dame ran the ball fifty-four times against Texas for 249 yards, passing only twenty-eight. The Irish ran wild, riding their option attack to an absolute rout. But there was no good reason Mackovic couldn’t have answered in kind.

Williams left UT after his senior season with a Heisman Trophy and as the NCAA all-time rush leader after surpassing Tony Dorsett’s twenty-two year old record of 6,082 yards by nearly two-hundred. It took Mackovic a surprisingly long time to give Williams the touches his performances demanded. After his first three games as a Longhorn Williams had carried the ball 38 times, a 12.6 carry-per-game average. His season total finished at only 12.7 cpg, despite his impresive yard-per-carry rate of nearly six on 166 rushes for 990 yards. As a sophomore he rushed 205 times for 1,272 — fifteen times a game for a 6.2 average. As a junior those figures increased 1,878 on 279 carries — twenty-five carries a game for a 6.73 average. That season Texas squandered a plethora of talent to somehow finish 4-7. Mackovic was duly fired and replaced with North Carolina head coach Mack Brown. In Brown’s first season Williams saw the ball 361 times [over thirty times per game], 2,124 yards [a 5.9 yard average], and won the Heisman.

Players generally improve with time and entrusting freshmen with too much responsibility is not often wise. But Ricky Williams was no ordinary freshman. His yard-per-carry rate remained steady around a highly impressive six from begining to end of his collegiate career. Williams was almost certainly as ready for thirty touches a game in his freshman campaign as he was when Mack Brown arrived in Austin three years later. Unfortunately for Texas fans, and ultimately for the man himself, Mackovic apparently lacked the vision or the courage to make a choice that seems simple in retrospect. His is a depressingly familiar cautionary tale of a coach out-thinking himself in an effort to employ the most innovative strategy.

Lou Holtz had the right idea. Even if you hand the other team your playbook, they still have to actually stop your guys. 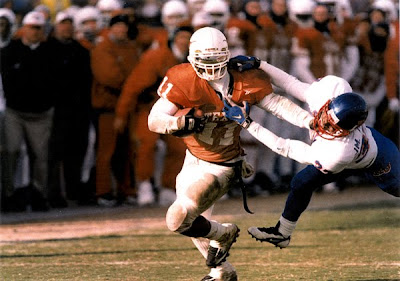