I have posted several times recently about the OU-Nebraska rivalry. In my last post I mentioned as an aside my hope that the one redeeming feature of the newly gutted sell-out Big XII might be that it opened the way to restore OU-Nebraska to an annual fixture as a non-conference game. This apparently will not happen anytime soon. OU athletics director Joe Castiglione recently told Daily Oklahoman columnist Berry Tramel:

When asked the same question a few days later Bob Stoops was even more emphatic, and sarcastic:

"Yes, we'll stick them in between Cincinnati and Florida State! If we had a non-conference schedule like a lot of other teams, it would be awesome. But we don't. Something's got to change. If they're willing to do it, we'll have to make some serious adjustments in our schedule." 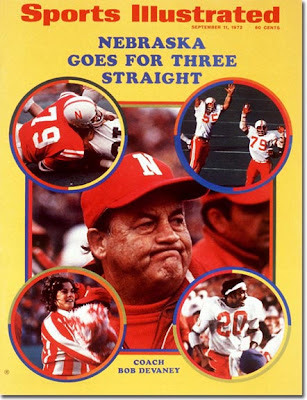 In other words, playing Nebraska makes it too hard to go 12-0. Roadblocks to an unbeaten year aren't popular anywhere, but least of all in Big XII country. Both Stoops and Mack Brown are on public record several times as viewing the conference championship game as an irritating potential hazard. You can believe that after the extra second league officials had to gift Texas in 2009 to get the 'Horns to Pasadena, Brown and Co. will be happy to see the back of a conference title bout in their reduced ten team league. Why make life harder for yourself, right?
More than ever in the BCS era a zero in the losses column is the golden figure that means a shot at the mythical national title. And OU football has always been about the national championships. Its record of seven AP championships since 1950 puts the Sooners among the elite of the elite. This championship history is what Sooners call "a tradition of excellence." Oklahoma's football history is indeed nothing if not excellent. AP championships in 1950, 1955, 1956, 1974, 1975, 1985, and 2000 under three different coaches indicate a consistent institutional ability to win and a commitment to competitive prowess.

Decade after decade, despite changes in personnel, Oklahoma has built its football dynasty on dominance of its conference mates and triumph in a series of annual bouts with fellow heavy weights. Like most of college football's great powers, most of Oklahoma's annual schedules have always been filled by unimpressive conference rivals. Ohio State and Michigan have their Northwesterns and Indianas. USC has its Oregon States and Stanfords. Alabama has its Kentuckys and Mississippi States.

Besides Nebraska and Texas the schools that make up most of Oklahoma's past records amount to little. In-state rival Oklahoma State boasts only one outright conference championship since WWII, that coming in the Missouri Valley in 1948. The Pokes have only one Big Eight crown ever, shared with OU [of course] in 1978. Kansas only owns two shared conference titles since 1948; Iowa State has none. Mizzou earned its lone outright title in 1960 and shared one in 1969. Kansas State has only one, that of course won through a championship game upset of OU in 2003. Colorado has threatened insurrection with an ounce more consistency, claiming unshared conference crowns in 1961, 1989, 1990, and 2001, with shared titles in 1978 and 1991. Obviously only Nebraska's twenty-three conference titles and five AP championships, and Texas' twenty-one and three respectively, provide much in the way of a perennial elite presence in Oklahoma's past records. 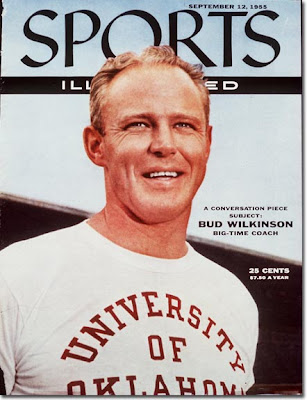 Every single Oklahoma national championship team has beaten both Nebraska and Texas in the same season. More often than not those two wins have provided the most impressive achievements on OU's resume. Of the Sooners' seven national championship winning years only twice were neither the 'Horns or 'Huskers ranked in the AP top twenty. During those years, 1955 and 1956, Bud Wilkinson's legitimacy came from the long winning streak OU was amassing [stretching to forty-seven games between 1953 and 1957]. Victories over 12th ranked Pitt and 14th ranked Colorado in 1955 and 19th ranked Colorado in 1956 also helped. In Oklahoma's five other national championship campaigns both the Longhorns and Nebraska were ranked in the AP top twenty at the time they played OU and after the bowls. Six times at least one ranked in the top ten and once, in 1975, both spent the entire season in the top ten. Three times Nebraska and Texas have provided the only wins over ranked teams on OU's regular season national championship resume.

When the Big Eight merged with the SWC in 1995 to form the Big XII people in Norman made a grave mistake in allowing the OU-Nebraska rivalry to be downgraded to a biannual event. A conscious decision was made to prefer the annual OU-Texas game in Dallas. Naturally the Texas rivalry will always be OU's showpiece event. The Sooners recruit heavily in Texas, have many Texas-based and Texan alumni, and rely heavily on Texas media markets for exposure and revenue. But to football fans of a certain age the OU-Nebraska game on Thanksgiving Day owns a national appeal and irresistible mystique. The University of Nebraska wanted to continue that tradition in 1995. Oklahoma's administration refused. Fifteen years later The University of Nebraska has tired of OU's other rival and fled Texas' domineering presence for the safe haven of the Big Ten. Once again, athletics administrators in Norman are closing the door on any hope of an annual OU-Nebraska fixture. The reason: national championships.

Going undefeated is simply more important than either maintaining traditional rivalries or facing unnecessary challenges simply for the sake of hoping to overcome them. To those college football fans who feel strongly that a healthy regard for the game's history is one of the aspects that sets our version of the game apart from the professional brand, this decision begs an important question:

What does it really mean for the University of Oklahoma to claim a national championship without beating Big Red? 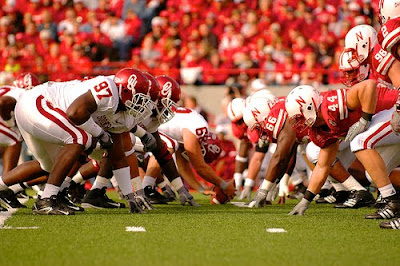 Lords of the Plains no more