Under the flood lights on a crisp late-September Pennsylvania Saturday night in 1982, Penn State quarterback Todd Blackledge threw a first down pass to tight end Kirk "stone hands" Bowman in the back of the endzone with just four seconds remaining on the game clock. The last-gasp effort barely found its target. Bowman needed to scoop the ball off his laces with his body moving backwards to make the grab. Somehow he reeled the ball in and his third score of the day overturned a 24-21 deceit to Nebraska, giving the Nittany Lions a precious victory that propelled them toward an eventual first AP title in school history. 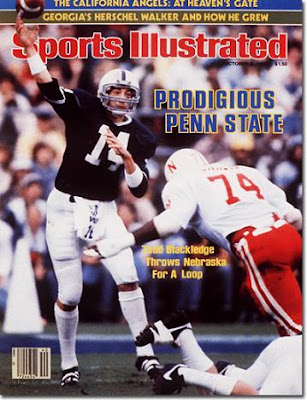 One minute and eighteen seconds of clock-time previously, Penn State had begun its final offensive possession of the game sixty-five yards from goal needing a touchdown to win. A personal foul penalty against Nebraska on the preceding kick-off helped matters, but with momentum apparently shifting and the famous 'Husker Blackshirt D on the other side of the line of scrimmage a score seemed unlikely. Nebraska's junior quarterback Turner Gill had capped a scoring drive that ate precious clock in the fourth quarter's waning minutes with a one-yard TD plunge.

That score gave Big Red its first lead of a game Penn State had controlled since a fourteen-yard Blackledge pass to Bowman completed an 84-yard scoring drive after only four minutes. 1982 was the first year of his tenure that Joe Paterno truly emphasized the passing attack. Blackledge was simply too good to under-utilize. He had thrown for four touchdowns in each of Penn State's first three games and threw for three more and 295 yards on 23-of-39 attempts vs. Nebraska. His 2,218 yards with 22 touchdowns as a senior lifted him to second in school career passing totals. Such productivity made for an impossing backfield. Alongside Blackledge running back Curt Warner [who had gashed Nebraska for an incredible 238 yards the previous year] racked up a thousand-yard season en route to graduating with a career total of 3,398, which remains the school record. When Warner broke loose for a 31-yard dash to the 'Husker four-yard line in the second quarter before finishing the drive with a two-yard TD run moments later, Gill and Co. faced a major uphill battle.

The situation was far from ideal for Tom Osborne's second-ranked Cornhuskers. With a loaded backfield featuring future Heisman Trophy winner Mike Rozier and a returning thousand-yard rusher in Roger Craig, Gill preferred to run the option rather than pass down field. When necessary Gill certainly could pass effectively. He graduated a year later standing second on Nebraska's all-time passing list. But with a rushing attack that had accounted for 677 of Big Red's NCAA-record 883 yards total offense during a 68-0 drubbing of New Mexico State the previous week, why pass? On the year Nebraska's three leading rushers alone would combine for 2,844 yards. The following season the 1983 Cornhusker backfield set what is still the school's single-season rushing record with a combined 4,820 yards. Even when compared to the unstoppable ground attacks of the early-1970s and late-1990s, the Nebraska running game of the mid-1980s constitutes a definite high watermark. 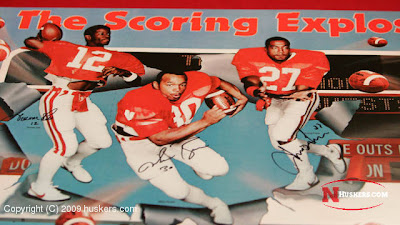 Despite their unquestionable pedigree, the Big Red backfield learned on September 25th 1982 that running roughshod over New Mexico State and lining up opposite "Linebacker U" were different matters. Joe Patterno's defense limited Nebraska to a relatively innocuous 233 team rushing yards, and actually caused Craig to leave the game at half time with a strained thigh. Never-the-less, Gill performed as required and dragged his team back into contention with the balanced approach required. The 'Husker signal-caller went 16-for-34 through the air for 239 yards, earning him media plaudits as Big Eight player of the week. With only 38 ticks remaining before halftime Gill threw a 30-yard touchdown strike to I-back Irving Frazier. Then six minutes after Blackledge restored Penn State's 14-point cushion on a pass to flanker Kenny Jackson early in the third quarter, Gill struck again with a scoring strike to Rozier. Nebraska simply refused to go away and it was hardly a surprise when Osborne's team overcame the hostile road environment to seize its late lead inside the final two minutes.

Gill's touchdown dive set up a final, decisive Penn State possession that featured both drama and controversy. Blackledge marshaled his team with apparent ease to the Nebraska thirty-four before the Blackshirts recovered to collapse three consecutive plays at or behind the line of scrimmage. With only 17 seconds remaining, facing a fourth-and-eleven situation and trailing 21-24, Paterno considered for the first time in the game [as he later admitted] going for a tie. But with his place-kicker, Massimo Manca, having already missed three attempts on the day, the Penn State coach decided to try fortune's favor with an ounce of bravery instead. The gamble paid off when Blackledge shot an absolute bullet to Jackson just a step beyond the first-down marker at the NU twenty-three. Blackledge then scrambled for six more before Penn State gained nothing on second down.

It was at that moment that the game attained college football infamy. With all of the team's timeouts expended, Blackledge went deep along left sideline to his other tight end Mike McCloskey. The Nittany Lion receiver was heading out of bounds as the ball reached him and the play ended with him well into the Nebraska bench area. Osborne and Co. could not believe their eyes when the sideline umpire signalled a catch, giving Penn State a first-and-goal from the two with those four precious seconds remaining. Nebraska coaches and players were still crying bloody-murder when Bowman fell backwards out of the endzone clutching his third TD ball of the day, giving number eight Penn State a banner victory as the clock expired. 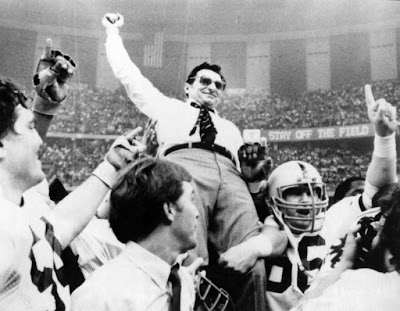 The call, which was unquestionably wrong, had far-reaching repercussions for both teams. After having gone undefeated in 1968, 1969, and 1973 without winning a national championship, Joe paterno finally gained the AP voters' respect in 1982 despite picking up a loss. The '82 Nittany Lions finished the season 11-1 with a 21-42 road loss to Paul Bryant's Crimson Tide. Despite that loss, several key wins earned the necessary grace for Penn State to be voted number one over 11-0-1 SMU following the bowls. Penn State's opponents combined for a national best record of .687. On New Year's Day, while Nebraska only managed a narrow 21-20 Orange Bowl win over 8-2-1 LSU and SMU failed to impress en route to a 7-3 victory over 9-2 Pitt in Dallas, the Nittany Lions knocked off Herschel Walker and the number one Georgia Bulldogs in New Orleans. Wins over Notre Dame and Nebraska combined with Penn State's impressive Sugar Bowl victory to crown a national championship resume. Without a blown call in the dying seconds on September 25th, the 1982 Nittany Lions would have been just another very good 10-2 Paterno team.

Conversly, that same call caused Tom Osborne to extend his wait for a national championship by another year. The drought eventually lasted to 1994. Big Red finished the 1982 season 11-1 and placed third in the final AP poll. As a senior the following year Turner Gill led his team to a perfect 11-0 regular season and a third consecutive Orange Bowl berth before an endzone pass from the two-yard line once again proved decisive. 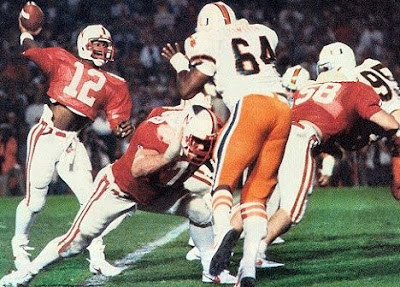 By the final minute of the game Nebraska had clawed back from 17-0 and 31-17 defecits to reach 31-24 with possession of the football inside the Miami Hurricane thirty. In an uncanny echo of Blackledge's final drive in State College fifteen months previously, three consecutive 'Husker plays garnered little success. Facing fourth-and-eight Osborne called an option play which Gill kept himself, bursting twenty-four yards for the endzone. Down 30-31 number one Nebraska would likely have been voted national champion with an extra point and the tie. But Big Red didn't play for ties. Letting the chips ride for it all, Gill rolled right on a two-point attempt and passed to an open receiver at the front of the endzone. For 'Huskers time slowed to a creep as they watched Miami safety Ken Calhoun close the gap, stretch his body, and put fingertip to ball for a championship-winning deflection. Somehow Nebraska's prolific offenses of the early 1980s never won a national title.

Penn State and Nebraska have played one another on thirteen occasions. Once back in 1920, five times between 1949 and 1958, for a two-game series in 2002 and 2003, and for five straight seasons from 1979 to 1983. The two schools have met six times in State College, six times in Lincoln, and once in the Kickoff Classic at Meadowlands Stadium -- a game in which the 1983 'Huskers meted out bloody vengeance on the graduation-ravaged Nittany Lions for the disappointment inflicted the preceding season. Of these thirteen meetings the five games played during the early-1980s naturally define the identity of the series. Two powerhouse programs known for their old school style and understated dignity clashed with full force at the height of their respective powers. Two massive fan bases in football-obsessed states watched with bated breath as their schools placed national championship aspirations on the line to test their mettle against the best. Nebraska won the first two bouts, 42-17 and 21-7, before Penn State answered in kind 30-24 in Lincoln and so famously in that 27-24 triumph at Beaver Stadium. Sadly, Nebraska's 44-6 romp the following year was the last word on the matter for two decades. 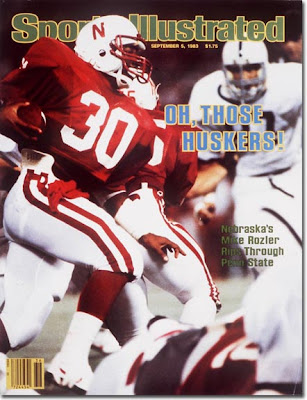 Nebraska finished the 1979 season ranked 9th in the AP poll, Penn State 20th. The following year they polled 7th and 8th respectively. Penn State finished the 1981 season 3rd with Nebraska polling 11th. A year later the Nittany Lions were crowned national champion with Nebraska on their heels in 3rd. In 1983 Big Red finished only behind Miami thanks to their failed two-point attempt, while Penn State followed their disastrous start in New Jersey with an 8-4-1 season to finish unranked for the first time since 1976. Penn State's narrow victory in 1982 helped earn Joe Paterno a national championship. Had the Nittany Lions lost, Nebraska would almost certainly have claimed that laurel. The next year Big Red all but did just that. Simply put, Penn State and Nebraska's games between 1979 and 1983 mattered. And they were nothing if not memorable. The two programs which are perhaps more than any others virtual mirror images of one another provided matchups that built expectations without failing to deliver. It is only a shame they did not continue to play after the '83 Huskers' lopsided coming-out party at the Meadowlands. 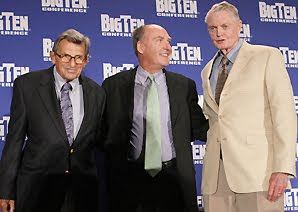 Presently Big Ten commissioner Jim Delany is considering his newly-expanded league's options for dividing its twelve members into two divisions for football. There are many issues to consider that needn't be rehearsed here. It only need be pointed out that Nebraska has lacked a true annual rivalry game against a conference foe of equal stature since the Texan invasion/hostile takeover of the old Big Eight in 1995. Penn State has perhaps never had a true annual rival. The Big Ten's grand plan to manufacture one via the uninspiring Land-grant Trophy series with Michigan State has been quite the flop. Geography is hardly good grounds for objection in a league with a footprint that now stretches from Philadelphia to a little more than one hundred miles from the Rockies. And more importantly, the Big Ten added Nebraska to increase the relevance and national exposure of its football teams.

Imagine this scenario for the last two weeks of conference play:

Michigan plays Ohio State for one division title. A few hours later Nebraska faces Penn State to decide the other. The following week the winners face off with national championship implications likely at stake.

What could possibly be more appealing and nationally relevant than that?