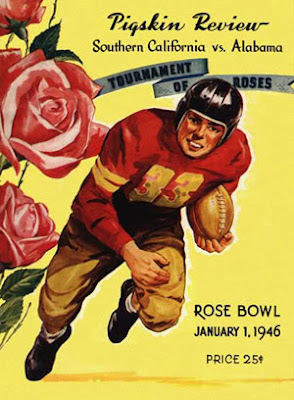 During the late afternoon of New Years’ Day 1946, with the clock running out on the thirty-second Rose Bowl, Southern Cal reserve tackle Myron Doornbos penetrated the Alabama line and blocked a Gordon Pettus punt. Trojan end Chuck Clark scooped up the loose ball on the Bama five-yard line and ran it home for a score. The touchdown, SC’s second of the final period, put a veneer of respectability on what had been a lopsided rout. The Crimson Tide ran out 34-14 winner, taking the University of Alabama’s all-time record in the Pasadena classic to 4-1-1. Since its first appearance at the Tournament of Roses in 1927 Alabama had been the most frequent and successful guest. The southern powerhouse would also be the last non-Big Ten visitor for more than half a century.

The unbeaten, untied Southeastern Conference champion had rolled to a 9-0 record in emphatic fashion, outscoring opponents 396-66. Head coach Frank Thomas, a Knute Rockne protégé, had installed the ‘Notre Dame box’ offense after his arrival in 1931. The year before Thomas’s arrival in Tuscaloosa legendary head coach Wallace Wade had led the Tide to a third national championship in six seasons before accepting a job at Duke. Productivity never dropped under Thomas as Alabama went 9-1-0 his first season. A fourth national title followed in 1934. No southern school, including “General” Bob Neyland’s Tennessee Volunteers, had an answer to the complex trickery of Alabama’s pre-snap offensive shifts. Thomas’s latest installation in 1945 revolved around the power running of halfback Lowell Tew, the darting speed and precision passing of halfback Harry Gilmer, and the bruising blocks of 248-pound all-America center Vaughan Mancha. As with most college teams of the late war years, the Tide players were young. Alabama’s draft-age players had gone off to war in 1942, leaving the university without a varsity squad the following season. Arriving in 1944, Gilmer and company would be the only squad of four-year starters in Tuscaloosa for three decades.

The young Crimson Tide cut their teeth in with a 5-2-2 freshman campaign which culminated in a narrow 29-26 Sugar Bowl loss to Edmund Cameron’s Duke Blue Devils. Notoriously hyperbolic sports-writing legend Grantland Rice reported after the game that Gilmer had been “better than Sammy Baugh” — a rather sacrilegious comment, but high praise. A year’s experience added to Alabama’s plentiful talent and Thomas’s precise, demanding coaching bred a squad of champions in 1945. The Tide practiced so hard under Thomas that games typically felt like scrimmages to battle-tested players. The young Paul “Bear” Bryant learned his own tenacious and punishing coaching style under Thomas during the early thirties. During the week-long train ride to Pasadena Tide players studied with professors during the day and stopped for several hours each afternoon to practice. Workouts were so physical that Lowell Tew broke his jaw bone and did not start, playing instead with the reserve squad and wearing protective head gear. 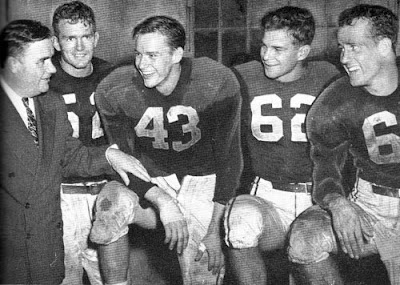 That kind of physicality gave Bama a decided advantage over Newell "Jeff" Cravath’s 7-3 Trojan squad, which actually outweighed the Tide by an average of eight pounds a man. 320-pound tackle Jay Perrin — a giant in that era — led a strong line that allowed star halfback Ted Tannehill to run roughshod over most of the Pacific coast’s other squads. Though odds-makers had the second-ranked Tide as a touchdown favorite, no Southern Cal squad had failed to win the Rose Bowl classic in eight appearances. Most of the 93,000-strong partisan crowd hoped and expected that the Trojans would find a way to prevail.

It took only two plays for the those hopes to being unraveling. On second down, Tannehill fumbled in the Trojan backfield. Hefty Alabama right guard Jack Green to recovered on the fifteen. Four plays later quarterback Henry Self reached the endzone on a two-yard sneak. The two sides exchanged punts through the remainder of the first period before Gilmer took control. On the first Bama possession of the second quarter the Tide marched sixty-eight yards in eleven plays. Gilmer called the plays, distributed the ball, and went across himself for the drive-capping play from the SC five. Behind the blocking of Mancha and Green — the standout performers in an excellent frontline — Bama’s backs enjoyed gaping holes and frequently reached the Trojan secondary untouched.

On the final Tide possession of the first half Frank Thomas’s men showed their squad depth as the second string offense romped to a sixty-four yard scoring drive on just four plays. Gordon Pettus, Gilmer’s understudy at halfback, broke free for a fifty-one yard run before Trojan backs finally dragged him down inside the five-yard line. Tew finished the process with a two-yard plunge at right end. Southern Cal’s struggles only mounted after the break as Alabama continued to hog the ball, putting together another scoring drive on seven plays on its first possession. A big kickoff return set the Tide up inside SC territory. Tew, Gilmer, and fullback Norwood Hodges then alternated runs to cover thirty-nine yards before Hodges finished with another short dive to the endzone. Gilmer completed a masterful performance early in the fourth quarter with a twenty-five yard touchdown pass to Self, putting the Tide ahead 34-0.

Alabama racked up 292 rushing yards and eighteen first downs, allowing Gilmer to pick his moments in the passing game. Four completions in twelve attempts added an unspectacular but useful fifty-nine yards and a score with one interception. Perhaps more impressively, Alabama’s frontline dominance was equally marked on defense. The Trojans managed just six net yards rushing, three first downs [all in the fourth quarter], and only thirty-five yards passing. Tide defenders also added to the home team’s woes with two interceptions. Southern Cal’s stars simply never found their rhythm. It seemed they couldn’t buy a break. On the kickoff following Gilmer’s final score, with most of Alabama’s third string unit in the game, Tannehill ran the ball back ninety yards only to see the play called back on an offside penalty. 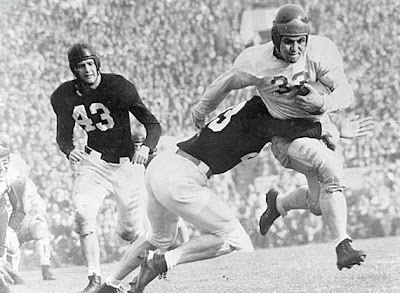 The Trojans finally managed a little offensive output before a deep punt backed Alabama up to their own twenty-five. SC’s line then held the visitors in check, forcing Pettus to fumble. Big Jay Perrin recovered, setting up Trojan halfback Verl Lilywhite to roll out and hit left end Harry Aldeman for a touchdown pass on the ensuing play. That strike accounted for almost all of Southern Cal’s positive offensive yards in the final box score. Following the kick-off SC again prevented the Alabama reserves from making a first down, forcing the punt which Doornbos blocked on the game’s final scoring play. Two late scores were perhaps a just reward for the Trojans, who continued to put forth full effort during an utter rout at the hands of an obviously superior opponent. But the final score-line did no justice to Alabama’s dominating performance.

Coach Thomas’s Crimson Tide silenced the California crowd. Earl Blaik’s unbeaten Army squad, led by Glenn Davis and Doc Blanchard, had been voted national champion by the Associated Press. West Point did not accept bowl invitations in those days [and would not do so until 1984], denying Alabama the chance to test themselves against the very best. But in every sense they could have proved, the Crimson Tide were champions.
Years later Gilmer would remember of the game:

“We beat Southern Cal 34-14, and it wasn’t that close. After that the Rose Bowl shut Alabama and the other southern schools out.”

From New Years’ Day 1947 until the Miami Hurricanes faced Nebraska in the 2001 season Bowl Championship Series title game, the Rose Bowl would only host visitors from the Big Ten. To this day University of Alabama lettermen, alumni, and fans will tell anyone who cares to listen that Tournament of Roses organizers took that decision because they were sick of the Crimson Tide embarrassing the west coast champion. And there may be some truth to their argument.


[Sources: New York Times; McNair, What it Means to be Crimson Tide].