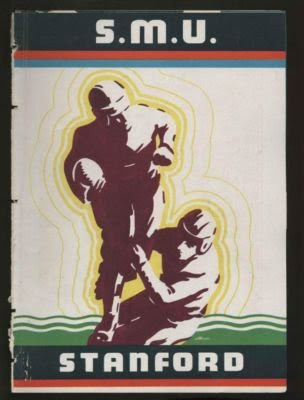 On New Years’ Day 1936 the SMU Mustangs represented the Southwest Conference 2,000 miles from home in the Rose Bowl — the first Texas school to do so, and the last for seventy years. To their opponent, Stanford, the Pasadena showcase was nothing new. The appearance was the sixth in school history and third consecutive. Having lost the previous two Rose Bowl Games to Columbia in 1934 and then an Alabama squad in 1935 that featured a young end named Paul Bryant, the Indians were in no mood to let SMU take the laurels.

Under third-year head coach Claude Thornhill, Stanford had stormed to Pasadena as 8-1 Pacific Coast Champion with only a one-point loss at UCLA blemishing the record. Thornhill had played for Glenn Scobey Warner at Pitt and later followed his mentor out west to learn the coaching trade. By the time Warner left Stanford following the 1932 season for Temple, the final destination of his forty-four year coaching career, he had led the Indians to three Rose Bowls and established the school as the West Coast’s football power. He had done so with technically sound, tried-and-tested methods that even by the 1930s were already seen by many as somewhat old fashioned. But then, a veteran coach who had graduated Cornell in 1894 and was known by the nickname “Pop” was hardly likely to embrace much new wave thinking. His successor, a former lineman sarcastically nicknamed “Tiny” on account of his hulking stature, unsurprisingly upheld all of his predecessor’s methodology. Behind the straight-ahead running of all-America fullback Bobby Grayson and a bruising line led by Jim Moscrip, another all-America at left end, Stanford’s “vow boys” had pounded their way to the only three-year run of successive conference titles in school history. The freshman class of 1932 acquired their name after vowing together that they would never receive the kind of thumping at the hands of the hated USC Trojans which the varsity took that year. And they never did, going a perfect 3-0 against USC. 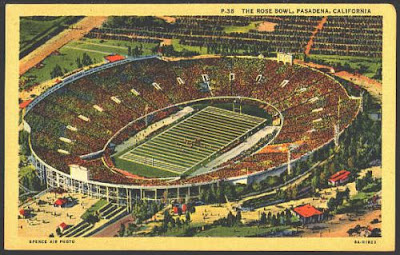 Facing Stanford that clear, sunny January 1st was a team that provided both a mirror image and a stark juxtaposition. The top-ranked, unbeaten Ponies were also at the height of their program’s historical powers. And SMU also featured two all-America selections — left halfback Bobby Wilson and powerful left guard J. C. Wetsel. Like Stanford, SMU had only recently parted ways with a legendary coach. After three conference championships in thirteen seasons and an 84-44-23 record Ray Morrison had returned home to coach his alma mater, Vanderbilt, the preceding year. Morrison’s successor, Madison “Matty” Bell would achieve a 79-40-8 mark through twelve seasons, including a perfect 12-0 regular season his first year. Bell, a Fort Worth native, had played for tiny Centre College in Kentucky, and had coached at TCU and then Texas A&M prior to taking the SMU job. Bell led his team past his former employer TCU and its great star Slingin’ Sammy Baugh in a 20-14 thriller to clinch the Rose Bowl berth. Both TCU and SMU employed offensive styles that the New York Times called:

“…the wide open style of play that has been increasingly adopted in all sections except the west coast.”

True to form the Rose Bowl unfolded as a battle of old versus new school, each team continuing the approach that had carried them so far. Stanford attempted only five forward passes, completing just 2-for-43. Two were intercepted. In contrast the Indians ground out a relatively productive 113 yards on the ground, and elected to punt fifteen times. As was not uncommon in football through the 1930s, many of Stanford’s punts were surprise “quick kicks” on first down designed to pin the opponent deep when no return man could run the ball back. With senior quarterback and Pasadena native Bill Paulman punting for a forty-yard average and the larger Stanford line successfully hurrying the SMU pass-attack, the quick kick strategy proved remarkably effective. Using field position and conservative play Stanford outlast SMU for a final score of 7-0. And that despite being outgained by a margin of seventy-one passing yards and nine Pony first downs to just six for the Indians.

A surprise kick actually set up the game’s only score late in the first quarter. At midfield on first down Paulman pinned SMU on their five-yard line. The Ponies could not escape and kicked back. Their punting would be second-rate all day. Quarterback John Sprague and halfback John Finley shared eleven punts for just a thirty-four yard average. When Finley kicked the ball out of his endzone in the first quarter he was horrified to see halfback James Coffis return it fifteen precious yards. Working from the Pony forty-two Stanford took advantage with an uncharacteristic play when Grayson threw a twenty-three yard completion to Coffis. After two rushes for no gain Grayson burst around right end for seventeen yards. On the next play a reverse to left halfback Bob “Bones” Hamilton carried Stanford to the one-yard line, from whence Paulman stepped home running free as a fake hand-off to Hamilton motioned the SMU line to the wrong direction.

Despite having gained a touchdown with relatively creative play Thornhill decided to withdraw into more cautious tactics for the remaining three quarter, seeking to preserve the Indians’ one-score lead. SMU passed the ball thirty times, an amazing number for the era. Unfortunately the Stanford line successfully penetrated the Pony backfield with enough regularity to disrupt the SMU air-attack. The Ponies never managed to complete passes with sufficient consistency to throw keep drives moving. Occasional short gains were peppered with enough incompletions that while SMU’s tactics impressed the predominantly West Coast crowd, they availed little. Finley, Wilson, and Sprague combined for only 11-of-30 passing. Worst of all, they were picked off a crippling six times — usually at decisive moments which allowed Stanford to “bend but not break” on defense before the phrase had been coined. 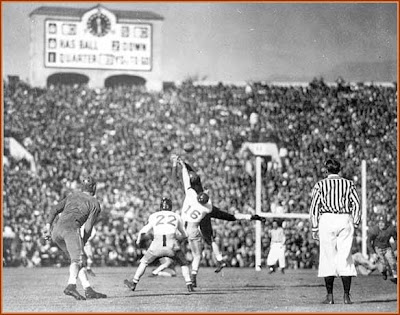 Faced with a physical team that was disrupting its preferred style of play, the SMU offense was forced into trickery to gain its only realistic scoring opportunity. On the next Stanford possession after Paulman’s touchdown Hamilton attempted a rare pass only to be picked off by Sprague. Feeling unable to run into the traffic in front Sprague quickly threw a lateral to Wilson, setting up a short return by the all-American. The Ponies then ran a double-lateral hook and ladder to the Stanford five-yard line. Finley began the play with a forward pass to Harry Shuford, who tossed a short lateral to Wilson. The halfback then rifled a bullet-like second lateral back across to Finley who was darting out of the backfield. He almost reached the endzone before Stanford defensive backs ran him down. Unfortunately for SMU, the shorter field then returned the advantage to Stanford's bigger frontline. Wilson was hit for no gain on the next play, fumbled and center Wes Muller recovered for the Indians.
SMU ended the half with another frenetic burst of offense. Pinned at their own five, Wilson and Finley fired off a series of short passes to reach halfway before time expired. The promising end to the first half proved chimerical. After the break SMU managed little on offense. The Stanford line wore SMU down, holding the Mustangs to just eighty-five total team yards rushing, and coming up with crucial interceptions. In the end a seven point lead proved plenty, and Stanford actually came closest to a second score of the game when a twenty-seven yard field goal try from Moscrip [set up by an interception of Wilson, naturally] drifted wide in the third quarter. 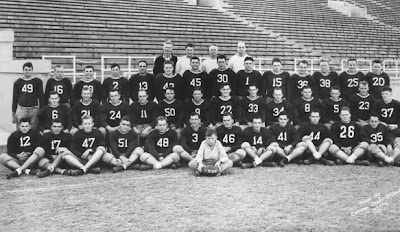 Bell’s team, the rapturously received SMU marching band, and the quaintly dressed Texas boosters all returned the 2,000 miles home with nothing. The one fanatic who hitch-hiked the entire way must have felt particularly disappointed. Doubtless, however, he never regretted making the trip. Not only has SMU never returned to Pasadena, but until the BCS era they remained the only Texas school to have made the trip. Not until Oklahoma crushed Washington State 34-14 on New Years’ Day 2003 did another former Southwest Conference member play in the “Granddaddy” [OU was a charter member of the SWC in 1915 but remained only until 1919]. Two years later the University of Texas played a thriller against fellow historical heavyweight Michigan, running out a one-point winner in a 38-37 final. Texas returned the following year to upset USC behind the incredible Vince Young, coming back late to win 41-38.

This year, on January 1st 2011 the TCU Horned Frogs became only the third Texas school to play in Pasadena, and the only one besides UT to be crowned champion. Senior quarterback Andy Dalton succeeded where even Slingin’ Sammy had failed in 1935, leading the Frogs to college football’s most prestigious bowl game. He also succeeded where Bob Wilson had failed, leading his team past a bulkier Wisconsin squad to a thrilling 21-19 win. Like SMU, the Horned Frogs will almost certainly never be asked to return. But like the Dallas man who loved his 1935 Ponies enough to thumb his way to California and back, no one in Fort Worth cares. The little guys from the old Southwest Conference had their day in the sun.