Whilst trawling a few Auburn blogs recently in order to gloat in their deliciously painful coaching hire fiasco, I came across one post at Joe Cribb’s Car Wash stating that the writer could not recall a single case of “false pessimism” from fans who mistakenly berated what they saw as an ill-considered coaching hire.

After the 1950 season Ohio State parted ways with head coach Wes Fesler. Though a highly touted All-American end for the Buckeyes in the late 1920s and general local hero, Fesler had not inspired as OSU coach. Despite a 1949 Rose Bowl championship his 6-3 record a year later, capped with ‘snow bowl’ loss to hated Michigan, proved too much. The university administration feared that the apparent gap between the Buckeyes and their rival to the north might never be closed and decided to look elsewhere for leadership.

Fan favorite and media darling Paul Brown expressed clear interest and the way seemed clear. Brown, a man so astronomically conceited he allowed the NFL franchise he served as inaugural head coach to assume his own name, had succeeded Francis Schmidt at OSU in 1940. In 3 years leading the Buckeyes he amassed an 18-8-1 record and had been gathering significant momentum and national attention before war intervened. Brown left Columbus to serve in the U.S. Navy and after the war accepted the job as coach of Cleveland's new NFL outfit. He gladly applied his local fame, immense personality and undeniable appeal to the success of the pro-game in Ohio. Impressed with his performance and dissatisfied with 6-3 finishes for the state's real team, Ohioans yearned to wind back the clock and resume Buckeye football progress at the point Japanese militarism had retarded it.

Athletic Director Dick Larkins and the university Board of Advisers did not see things in quite the same light. Where Buckeye fans saw wins, confidence, and magnetism, Larkins perceived arrogance and potential power struggles. The committee passed on an incredulous Brown and focused instead on University of Missouri head coach Don Faurot. 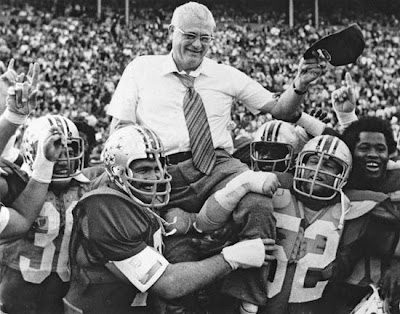 After playing for his home state Tigers in the first half of the 1920s Faurot determined to continue in athletics as a coach. Physically diminutive but mentally impressive and possessed of an indomitable drive for victory, Faurot proved a remarkable leader. His 101-79-10 record with three conference championships and four bowl trips in nineteen seasons from 1935 to 1956 stand as one of Mizzou’s better eras. Faurot also originated the T-formation, which dominated offense in the college game during the 1940s and into the 1950s. Faurot interviewed in Columbus and initially accepted the job, but experienced a change of heart upon returning home. He decided to remain in Missouri, preferring to finish his career in the state he had always called home than to take on a new and vast challenge farther north.

Denied his first and second choice, Larkins looked lower down the list. Eventually the search came to one Woodrow “Woody” Hayes, then at the end of his second year at Miami of Ohio. Hayes’ resume did not exactly inspire. He had been an unmemorable lineman at tiny Denison University in Granville, OH before going on to assistant coach/ history teacher duties at Mingo Junction and New Philadelphia High Schools. In three years as New Philadelphia head coach his teams went 18-10-1. Nine of those losses came in 1940, his final year before departing for naval service. The strength of his first two seasons earned him the head coaching job at his alma mater in 1946.

A tumultuous 2-6 start gave way to two consecutive 8-0 seasons, allowing Woody to cash in and move to Miami of Ohio. With the Redskins Hayes again began poorly, going 5-4 in 1948 before a 9-1 run, conference title and a win in the short-lived Arizona ‘Salad Bowl’ in 1949. At both schools the friction caused in his first season by Hayes' demanding and pugnacious style raised eyebrows around campus and beyond. Hayes had to use personal connections to even get his name added to the bottom end of the Ohio State search list and was a long shot at the start of the process. Larkins interviewed numerous candidates better known and with stronger resumes, but Hayes’ bullish confidence served him well when he finally gained the chance to meet the committee in person.

The announcement of Hayes as Ohio State’s new head football coach did not spark public euphoria. If it did not quite create the pandemic vocal disappointment recently displayed in eastern Alabama the response was at least analogous. Starting with a 4-3-2 season, in which friction caused by Hayes' coaching methods again became public knowledge, did little to quell criticism. Confidence in the hire remained so low that as late as Hayes’ third season one irate fan paid for a plane to fly over the Horseshoe on OSU’s final home date pulling a banner reading “Bye bye, Woody”. Only delivering the Buckeyes’ first win in Ann Arbor since 1937 ensured a fourth season. Unofficially, Hayes was on notice.

His team could hardly have responded better. In 1954 Hayes finally had the players he wanted for his ultra-conservative pounding run-game. His stout, dedicated team replicated his own work ethic in grinding out a 10-0 Rose Bowl winning season. An AP national championship more than closed the gap between OSU and Michigan that in 1950 seemed in danger of opening into a chasm. 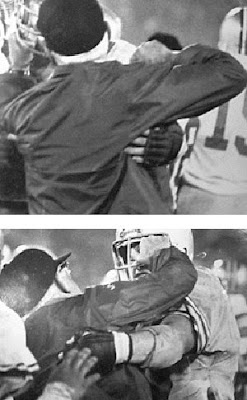 Woody Hayes almost defies eulogy. There is little about him that immediately commands praise except his success on the field. He did choose and train assistants well, and though he often struggled to delegate authority he was rarely served poorly when he did. Many of his assistants went on to coaching notoriety in their own right - Ara Parsegian, Bo Schembechler and Lou Holtz to name only three. Woody’s own game plans evolved little in three decades. His preference for the outmoded T-offense endured well into the 1970s. Only the innovations brought by his staff saved him from being outstripped by younger rivals always keen to prove themselves by outdoing the vaunted juggernaut Buckeyes.

Hayes struck out at his players routinely in practice and on the field. He verbally attacked referees with great ferocity and often embarrassed the university. He typically worked 14 plus hour days, becoming a presence noted by absence in the family home. His wife and son bore with him but must have felt cheated by his unyielding devotion to Buckeye football. Hayes' temper made countless enemies and brought official Big Ten censure on several occasions. Finally, in the 1978 Citrus Bowl Hayes punched Clemson linebacker Charlie Bauman after he made a game winning interception for the Tigers. Caught on ABC camera for the nation to see Hayes could not deny his crime, though he baulked from a full apology. A unanimous Board of Advisers decision put Hayes in the unusual position of being fired with a win rate above 70%, five national championships and thirteen Big Ten crowns.

But his players continued to love him. Former assistants and lettermen showered adoration, respect and praise until his dying day in 1985. Schembechler, Hayes’ great rival since taking the Michigan job in 1968, gave his former mentor the most glowing eulogy. Clearly the many tirades Bo received from Woody did not define the teacher in the eyes of his pupil. Players who had been through agonizing practices with no water or breaks, not to mention the psychologically punishing rants and physical abuse, returned praise for Woody’s character off the field. They saw him as a tender and concerned father figure who followed grades and social lives with selfless interest, helping wherever he could in the most practical ways. President Nixon also gave a eulogy at Hayes’ funeral. To many this will detract from Hayes’ standing and credibility, but not many people have a former Commander in Chief call them a friend at their funeral – even if it is R. M. Nixon.

Defining and judging Hayes is beyond the scope of my knowledge and talents. The man was irascible, outspoken and intransigent to say the least. His lack of self awareness almost cost Ohio State as much as his victories gained. And yet people who actually knew him saw past his flaws to something deeper. 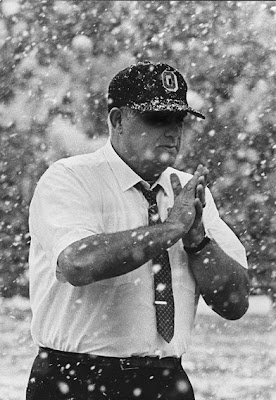 Whether or not Hayes was a good man in the grand scheme, one thing is in no doubt. Hiring him as Ohio State head football coach in 1950 proved a good decision. The public despair his arrival in Columbus inspired now seems laughable. Except to Michigan fans.

(Sources: Lombardo, Fire to Win; WOSU, Beyond the Gridiron; Life of Don Faurot)