We lack a definitive, scientific way to determine the best college football player of all time. So, in the interest of fairness and in order to settle a futile dispute, let’s just declare me the final arbiter and agree that it is clearly Sam Baugh.
Baugh died on December 17th, 2008 aged 94. Here in Fort Worth Baugh is a legend and revered local hero. He is also celebrated by those with a good knowledge of NFL history. Any one familiar with his career is in no doubt that his name belongs in any footballing pantheon of national notoriety. In everything he did on the field, Baugh stood out. But off it he was humility incarnate. He never brazenly promoted himself. It even took the providential intervention of the football gods to bring Baugh’s talent to light at all. Growing up in the central Texas town of Temple the odds did not favor him. Clearly the only genuine star on a woeful middle school team, his coach saw nothing to lose in moving him from end to the backfield before he was either old or big enough to be there. Fortunately his father found work with the Santa Fe Railroad and packed the family off to tiny Sweetwater in west Texas. Playing on much better teams Baugh reached the State High School playoffs twice. But it was as an inspired third baseman that he attracted the attention of Texas Christian University’s baseball coach, Dutch Meyer.

Baugh headed to Fort Worth to play baseball in 1933 with many predicting a big league future. Mercifully, the gods intervened again. Francis Schmidt, after quietly putting together 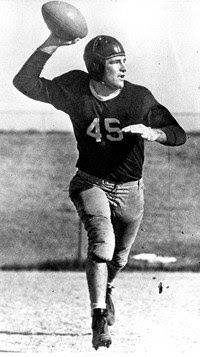 impressive football teams that won two Southwest Conference titles in four years, earned an irresistible job offer from Big Ten giant Ohio State. TCU moved Dutch Meyer over to football as Schmidt’s replacement. One of Meyer’s first acts, and either his most farsighted or fortuitous, was to convince Baugh to follow him. Meyer liked Baugh’s arm, his accuracy and his attitude and saw the young athlete as the key to his system. Perhaps Meyer’s love of baseball gave him a unique perspective on football. For whatever reason, he saw potential in the passing game that his peers did not. He instituted a pass-oriented short yardage system not unlike the more recent not-so-revolutionary ‘West Coast offense.’ With Baugh’s prodigious skill at the heart of operations Meyer’s Horned Frog teams went 29-7-2 in his first three seasons, winning the 1936 Sugar Bowl and 1938 Cotton Bowl. Baugh made the Camp All-America team twice and compiled 3,384 yards and 39 touchdowns. Texas Tech routinely posts such numbers today in their non-conference slate vs. Sun Belt scrub teams alone, but in the mid 1930s such stats literally boggled the mind.

Baugh’s career at TCU provided countless highlights, including a national championship effort at the second annual Sugar Bowl on New Year’s Day, 1936. The Horned Frogs ground out a bruising win over LSU by the spectacularly old-school margin of 3-2 (recently displayed for modern audiences by Auburn and Miss. State). On an oppressively rainy January day Baugh punted the water-logged football 14 times for a 45 yard average. But for all his wins with all their air of herculean perfection, Baugh’s TCU fame remains inextricably tied to a fateful home loss against cross-town rivals SMU on Nov 30th 1935. That day Baugh garnered highly deserved praise in the national press. But when in the end he came up short, showing himself mortal.

With the Great Depression showing no sign of abating, folks in North Texas needed something to cheer about. Regardless of the hard times, around 40,000 found the spare change to buy tickets that by kick-off were selling for the prohibitively princely sum of $1.65. No one doubted the value of their purchase as two star-studded teams presented the best of Southwest Conference football to the nation. With Meyer’s Frogs tied for first in the AP poll and Matt Bell’s Mustangs in fourth, both perfect at 10-0, big names headed to Cowtown from every corner. Fort Worth was then an obscure outpost, barely on the map half a century. The Southwest Conference was in its twentieth season but still languished far behind the Ivy League, Big Ten and Pacific Coast Conference in prestige and media attention. But with a Rose Bowl bid at stake New York Sun sports reporter Grantland Rice, a college football legend in his own right, refused to miss the spectacle. Texas football did not disappoint. Rice called the show: “one of the greatest games ever played in the sixty year history of our nation’s finest college sport.”

Led by SMU’s own All-American half-back Bobby Wilson, the Mustangs jumped out to an early 14-0 lead on 73 and 80 yard drives. TCU quickly pulled themselves out of their early slump. Baugh was far from the only star on the team. All American center Darrell Lester and All Conference back Jimmy Lawrence were only two of the other Frogs earning accolades of their own. But the team had only one undisputed leader and darling. Baugh did everything he could to find the win, throwing for 180 yards and a touchdown on 17 of 44 passes. Drops accounted for 8 of his incompletions. Baugh blamed himself, claiming that he threw too hard in an effort to defeat SMU’s tight coverage. Wilson later magnanimously insisted that his opponent’s passes had been manifestly catchable.

The game winning score came out of punt-formation on a fourth down heave from the TCU 37 yard line with seven minutes remaining in the fourth quarter. In those days an incomplete pass to the end zone counted for a touchback, so with nothing to lose SMU called pass and Bob Finley lofted the ball down field. In addition to his outstanding offensive play and consistent half-century punting Baugh was also a standout defensive back. He knew the pass was coming and was the closest TCU man to the action when who else but the irrepressible Wilson made a twisting catch, falling backwards over the goal line. The helpless Baugh could only watch aghast. He responded by driving TCU down the field before stalling at the 30. On the ensuing SMU drive Wilson gifted Baugh one last chance by fumbling at the Frog 18. TCU reached the opposing 25 yard line as the clock expired, leaving Baugh within sniffing distance of goal in a crushing 20-14 upset. No. 45 could do many things, but not bend time.

Grantland Rice, with his usual propensity to over-dramatize, captured the game’s frantic final moments, writing that Baugh’s “passing attack was eating up ground when the whistle blew with SMU supporters almost in a panic against the deathly machine gun fire.” Boston Globe writer Bill Cunningham summed up Baugh’s immense talent in a folksier fashion, penning words now immortal to every TCU fan: “Mr. Slingin’ Samuel Baugh can chunk that cabbage. He throws that plaything in all modes and tenses, short or long, high or low, hard or soft.”
Yes sir, Sammy Baugh could do it all; but not that day. Rice and sports writers of his ilk have always looked to make immortals of a few men. In reality, the appeal of our best athletes is surely that they are only men like us. Humility remains Baugh’s noblest and most admirable characteristic. 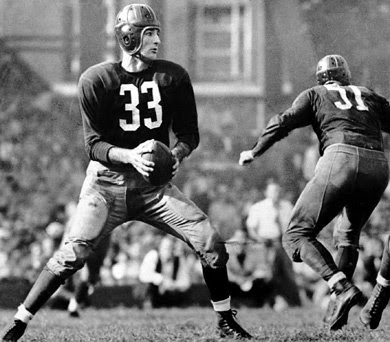 Baugh played for the Washington Redskins from 1937 until 1952. I won’t sully the pages of this blog with too much pro-football talk - If you want that, see the New York Times obituary – but a brief look at the NFL’s records pages speaks volumes for Baugh’s lasting impact on the game. He ranks first or second in multiple categories including most seasons leading the league in punting, passing, completions, completion percentage, pass attempts, yards gained, and lowest percentage of passes intercepted. He holds the NFL record for average gain per completion in a single game. His career average yards per punt is the NFL’s second highest and his single season average the highest. When the sun sets for its final time Baugh will still be the only player to have thrown four touchdowns and intercepted four passes in the same game (unsurprisingly achieved against the Detroit Lions – 1943). Most impressively, Baugh is the only name that appears consistently on the NFL’s all time record lists predating the 1960s. His athletic accomplishments stand up to rigorous comparison with the best of today’s game. Off the field, he surpassed them all.
Baugh spent years at the top of the professional game in the nation’s capital, but he remained a small town Texan to his core. He spent as much time as possible with his wife and children on their land in Rotan, Texas and retired there to peaceful quietude as soon as his playing days were done. Baugh was no recluse though. He unabashedly expressed due confidence in his ability, for humility is certainly not self deprecation. Probably the two most famous Baugh stories capture this contrast most acutely. 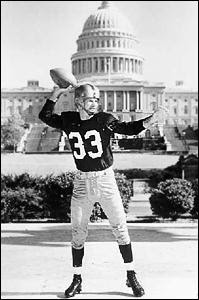 “They tell me you’re quite the passer.”

“I reckon I can throw a little bit,” Baugh answered.

“Show me,” Flaherty challenged. “Hit that receiver in the eye.”

For all his tongue-in-cheek assuredness, Baugh never demonstrated the self-congratulatory egotism that mars the modern game. He never signed any balls in the end zone with sharpies hidden in his sock for the purpose. He never swaggered, brayed, crowed, or strutted. Baugh did not win the second annual Heisman trophy, probably because the Southwest Conference in 1935 did not command enough national respect. That honor went to Yale end Larry Kelly, a man who notoriously lacked Baugh’s down-home graciousness. Baugh established the SWC as a recognized power, blazing the trail for another Horned Frog, Davey O’Brian, to earn the league’s first Heisman in 1938. Acknowledging Baugh’s accomplishments the SWC invited Baugh to a dinner for all its Heisman winners in 1995, the league’s valedictory year. Asked by Fort Worth Star Telegram writer Whit Canning how he felt sitting beside the likes of Doak Walker, Earl Campbell and Andre Ware, Baugh replied with a wry but serious smile: