According to the 2000 U.S. census, the population of tiny, rural Mount Olive, Miss. is a whopping 893. It was about the same in 1973, when Lucille McNair bore her husband Selma a second son. They named him Steven. The better part of half-a-hundred of those townsfolk were directly related to Steve and lived within a pigskin toss’ radius of his humble home. The family was far from affluent, but growing up with three brothers, numerous cousins and plenty of space Steve never wanted for entertainment. The boys played endless games of baseball, basketball, and football with all comers.

Life got harder when Steve’s father left in 1981. His older brother Fred, then thirteen, had to grow up fast. As the younger boys looked up to him he led the way through high school and onto college. Steve followed his brother Fred every step, gladly learning from his experience and coaching in ball games as in life. And at every stage he seemed to surpass his friend and idol. The nickname “Air McNair” first attached itself to Fred as quarterback of Mt. Olive High, though Steve would later assume it and make it famous. Fred’s High School career attracted enough attention to earn a scholarship at Alcron State, the historically black college located in Lorman, south-west Mississippi. Steve took his prep career to a new level. He played both quarterback and safety for four years, leading Mt. Olive to a state championship as a junior. He notched fifteen interceptions as a senior, making a state record career total of thirty.

While Steve attracted attention from major colleges across the south, Fred worked hard to earn the starting job at Alcorn. He finally took over as the Braves' signal-caller as a fifth-year senior in 1989, throwing for 1,898 yards and 14 touchdowns. That performance earned him a place at training camp with the Dallas Cowboys, but he did not make the final roster. Fred spent the next four years bouncing around the Canadian Football League. During those same years Steve made earning and keeping the quarterback job at Alcorn look easy.

McNair had no shortage of scholarship offers. Miami and Mississippi State pushed especially 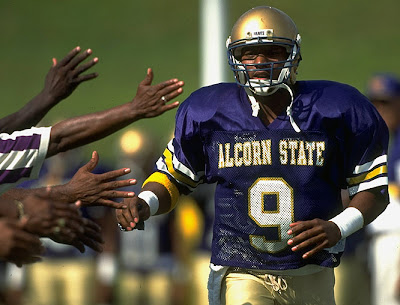 hard. But without fail, every coach steered the Super Prep Magazine All-American towards a collegiate career on the defensive side of the ball. In fairness to them, McNair had excelled at safety. Prep defensive-back stars transfer to successful college players far more often than quarterbacks, especially those coming out of tiny schools. But Steve believed he could play quarterback. He wanted to be like his brother. More importantly, he wanted to win. He had the drive and desire to be in command. He didn’t want less gifted players controlling the fate of his team in the offensive backfield while he watched helpless from the sidelines. Jackie Sherrill and Dennis Erickson did not share McNair’s confidence. The Uncle of a Mt. Olive High teammate told a Sports Illustrated reporter in the frankest terms:

“The thing is, Steve wanted to play quarterback. And to do that round here, a black kid has to go to a black school.”

So Steve “Air II” McNair went to play for first-year head coach Cardell Jones at Alcorn in 1991. It took him less than a quarter to assume the starting role he would not relinquish until graduation. It took only 60 minutes to prove the South’s elite college coaches wrong. In the Braves’ annual season opener against cross-river rivals Grambling State – the greatest black college program of all time, coached by the legendry Eddie Robinson – an unintimidated McNair led his team from behind in the fourth quarter to win 27-22.

Alcorn’s first two possessions sputtered and disgruntled locals began calling for Fred McNair’s kid brother. Jones had already been amazed by the freshman in fall camp. McNair went 9-of-9 for a TD in his first contact scrimmage. Jones made the best decision of his career in his inaugural game as head coach. He gave Air II a shot. His reward came immediately in the form of a touchdown. McNair added two more, along with 230 yards. By the end of that first game there was no doubting the talent Alcorn had on its hands. Those performances continued every week, every season.

As the truly great athletes always do, McNair played his best against the best. When McNair matriculated, W. C. Gordon’s Jackson State Tigers had been Southwest Athletic Conference champion nine times in the preceding eleven years. They had beaten in-state rival Alcorn in the traditional season finale fifteen of the last twenty. McNair delivered four straight victories by ever increasing margins. His freshmen year the Braves squeaked a two-point win. The next year it was seven, then nine. As a senior, McNair embarrassed the hated rivals 52-34. Larry Dorsey, who took over from Gordon in 1992, acknowledged before the 1994 season:

Performances against Grambling were equally memorable. As a sophomore McNair sprained his ankle and needed help to reach the locker room. The Braves were losing, had not reached the end zone, were on the road, and their star was hurt. The outlook was bleak. McNair came out for the second half, threw three touchdowns, and ran for a late game-winning score with a visible limp. Alcorn won 35-33. The following year, he threw for 268 in the first half alone. With the game tied 35-35 at half time McNair pleaded with his defense to give more and promised his team he would lead them to victory. He passed for 217 yards in the second half, totaled five TD passes on the day, and also ran for 99 yards and a score. Two other certain touchdown passes were dropped, one with only seconds remaining. The Braves lost 62-56.

Alcorn offensive coordinator Ricky Taylor summed up McNair’s skills as succinctly as anyone. He told a reporter: 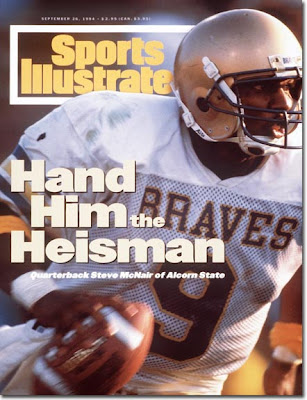 He had a strong case. McNair racked up 758 rushing yards with 16 touchdowns and threw for 6,436 with 53 scores in his first two seasons alone. He added 23 more TDs through the air and eight on the ground as a junior. These performances were incredible enough to garner serious Heisman talk, making McNair the first player at a historically black college to even be considered for the trophy. No player before or since at a division I-AA school [never mind one with an enrollment of only 3,300] has attracted so much national attention.

McNair summarized his obscurity best. He told the New York Times before his senior year:

“I’m just Steve the country boy from Mount Olive. There are about 900 people there; there were 42 in my high school class. I guess Lorman has about 300.”

That year McNair passed for 5,799 yards in 11 games – a divssion I-AA record. Over four seasons he averaged 400 yards passing per game - then an NCAA record. He totaled 928 completions on 1,673 attempts for 16,823 yards and 119 touchdowns – also a I-AA record. Not a few of his 58 interceptions could fairly be blamed on receivers, though he certainly never did. How could Heisman voters ignore him? Junior running back Rashaan Salaam of Colorado, one of only a handful of elite college backs to rush for 2,000 yards in a season, won the award. But McNair gained 655 voting points and polled third. For a small-town quarterback at an unfancied, tiny land-grant school in an unfancied state, third place practically is winning the Heisman.

McNair should have won. He deserved it. Pro-scouts salivated over him the way college recruiters ought to have done. He had always believed he could play quarterback at any level and set out to test himself at college. He passed the test on his first possession and proved it was no fluke in every game for four years. But at a school like Alcorn he simply didn’t have the skill around him to go all the way. As a sophomore and senior McNair delivered SWAC championships, but the Braves went out of the playoffs first round both times.

Regardless, McNair was the best at any level. If Heisman voters weren’t quite convinced, the NFL was. He went as the third overall pick to the Houston Oilers in the 1995 draft. His pro career lived up to every expectation. In 2000, he came within inches of being the second black quarterback to win a Super Bowl. 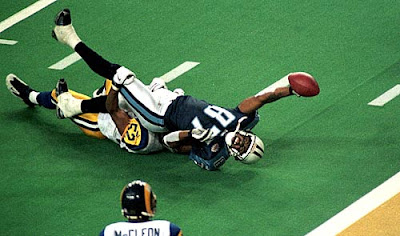 At the time of writing the circumstances of McNair’s death remain unclear. Even if they were fully know it is not for me to discuss or comment. I can only say that such deaths are always a sad waste. Steve McNair will leave many legacies to many people, no doubt. Of all the things he was, college quarterback does not rank as the most significant. But let there be no mistake: he was a great one.