There has recently been a lot of chatter regarding scheduling. It is an increasing trend for supposed power-house programs to line up less-than tantalizing non-conference slates of all home fixtures against multifarious current and former 1-AA sacrificial lambs. A recent rant by Jay Christensen (a.k.a the Wiz of Odds) on the In The Bleachers podcast got me wondering exactly how recent this trend is.

In 1978, NCAA football's top division split into 1-A and 1-AA. Big-time football schools felt shackled by their long-standing marriage to an equal number of much smaller programs. Each school possessed one vote in all matters, regardless of revenue or scale of operations. Big-time football schools felt that they needed different rules and organization for the very different requirements of high-revenue big-time ball. Many of the smaller colleges saw the split as an attempt by the big boys to starve their programs to death.

But how far was the 1978 split truly a divorce? Exactly how often did these big fish and their minnow bed fellows play against one another?

All the data for this post is taken from a survey of the game's major powers in the modern era. I define that as schools with more than one AP national championship since 1950. Those schools are Oklahoma, Texas, Notre Dame, USC, Ohio State, Penn State, Alabama, Tennessee, Florida, LSU, Florida State*, Miami, Nebraska and Michigan (who I included because they're Michigan, even though their 1997 championship is amazingly their only AP crown since 1950. They just kept finding ways to lose the Rose Bowl when it really mattered).

I looked for the number of games these teams played against schools which have spent more than a decade of the modern era below college football's top division. That includes schools who began in division 1 but moved down sometime after 1978, as well as schools who have risen to division 1-A from a lower level. It also includes several now discontinued programs such as Wichita State, Pacific etc. who went straight from the top division into non-existence.

The following graph indicates the number of games played between top-tier programs and smaller schools when both teams were technically competing at the same level. For example, Alabama vs. Wichita State in 1979 - WSU continued as a 1-A school until dropping football in 1986; Texas vs. UNT in 1992 - North Texas only moved up to 1-A in 1982; and Miami vs. Florida International in 2007 - FIU moved up to 1-A in 2005 and only began football in 2002.

I dropped the 1950s from this graph because the results were skewed by the fact that the three Florida schools did not really grow into major powers until after that decade. After the 1950s no decade contained a total of more than 22 games between the major programs and these smaller opponents. Until this one... 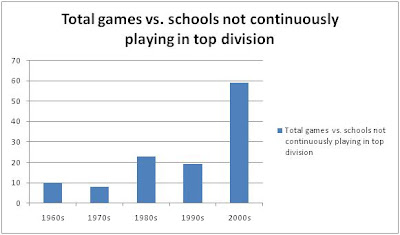 Not a pretty sight.

A more recent trend has been for division 1-A schools to play current 1-AA members. After 1978 such games did not count towards the necessary win total for bowl eligibility. That rule changed in 1998 after an NCAA amendment was proposed by the Big XII and adopted.
That this rule should come from the Big XII is interesting. Neither Oklahoma nor Texas had ever played a game with a team then competing in a lower division. With the exception of a few games against the South Dakota schools in the early 60s and one fixture with Middle Tennessee in 1993 (MTSU moved to 1-A in 1999) neither had Nebraska. Obviously some Big XII powers hoped to clear the way for some serious resume padding. And the giants of the SEC were only too happy to vote for the move.
From the divisional split in 1978 to the adoption of the bowl eligibility measure in 1998 no single season contained more than two games between major powers and a team then competing in 1-AA ball. More than half of those years contain none at all. Then this happened... 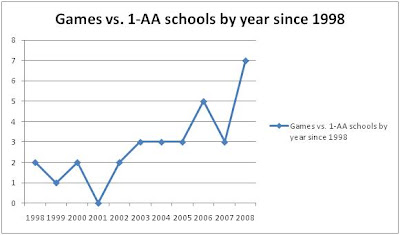 Inexcusable cowardice.
Seven games in one season between schools with more than one national championship and programs with twenty less scholarships competing a division below. If that doesn't make you change the channel, either your alma mater is involved or you've dozed off.
For more context, the following graph shows games between the major powers and schools then competing in a lower division by decade. 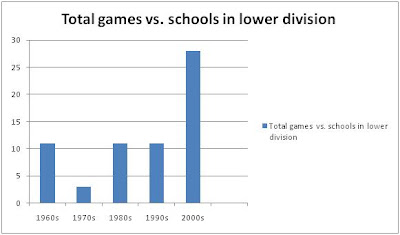 Not for the feint of heart.

The other regrettable recent trend is the number of big programs refusing to sign home-and-home series for non-conference games. This is tied to the declining value of the average September fare because obviously better opponents will only sign contracts to play return fixtures. So now we have Notre Dame, the historic giant of the game known for its many inter-sectional rivalries against other big boys, playing one-and-done home fixtures against Nevada - a school which only moved to 1-A ball in 1992.

I wondered how far back the trend of playing an unbalanced home slate went. I counted every season the big boys played six or more home games in a ten games season, or seven or more in an eleven or twelve game season since 1950. The figures were skewed somewhat by the fact that Michigan has apparently played more home fixtures than away since the dawn of time, and Florida and Tennessee are almost as travel shy. By comparison Texas, Notre Dame, USC and Oklahoma played a combined four seasons with a home-away imbalance prior to 1999! 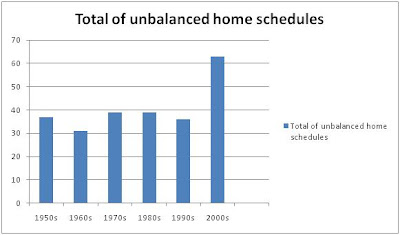 "Oh no, we can't travel. What about our precious revenue?"

Apparently, we are now told, home revenue is so vital that big football schools cannot possibly play less than seven, usually eight home games. This is clearly nonsense. For one thing, a decent one-and-done opponent will now run you over $1 million. That's what Clemson is paying TCU this September. Even your local UT. Chattanooga will claim around $750,000 for the eight touchdowns they guarantee your future Heisman winning QB Sam Bradford. Furthermore, how did all these schools ever make ends meet before this decade on only six home games?

What has happened to college football in the last decade?

For one thing, the 2002 move to the 12 game schedule has been a total joke. People love college ball because its amatuerism encapsulates the very essense of competition for its own sake. The 12th game has universally been used to add a cheap win to the record and fill athletic department coffers through $85 bleacher tickets for a 58-0 win over East Podunk State U. Whenever anyone talks about playoffs to improve the game ADs and Presidents complain about "too many games," yet they added an extra one already this decade for no competitive reason whatsoever. How about dropping the 12th games as part of post-season reform? Are there any greedy coaches and administrators brave enough for that?

I see two main issues that require reform. Firstly, the rule allowing one win per season against a 1-A opponent to count towards bowl eligibility should be scrapped. It's an indefensible joke. If 12 games is too many, play 11. If you need the revenue, then man up and actually play someone. There's no need to offend your fans and waste precious transmitter space that could be better spent on Saturday afternoon made-for-TV movies.

The Wiz of Odds goes as far as to suggest that teams playing a 1-A opponent should be disqualified from the national title game. That seems fair to me. This season's favorite is the Mighty Gators. Is it really necessary for Tim "second coming" Tebow and pals to beat the living snot out of Charleston Southern? Why not just stay home and have a nap instead? Oh yeah, revenue...

Secondly, the problem is the BCS. Defenders of our current nightmare system claim it is a better way to determine a genuine national champion than the previous regime. I actually disagree. Sure, the BCS guarantees a #1 vs. #2 matchup, but those teams won't necessarily actually be the first and second best. Generally they are just the two undefeated or one-loss schools from the fancied conferences.

The AP poll actually does several things the current BCS formula does not. For one thing, it recognizes the value of a quality loss. Look back over the records of former AP national champions. You'll find the 1975 Sooners with a 3-23 loss to Kansas, the 1966 Irish and their famous "tie one for the gipper" game with Michigan State, 1977 Notre Dame who lost 13-20 AT Mississippi (will ND ever go to Oxford again?), the 1978 Crimson Tide who lost at home to USC, the 1967 Trojans who lost a game at Oregon State, the 1970 Huskers who tied a game 20-20 with USC...

The BCS format elevates the golden record of 13-0 above everything else, so that beating up on Florida Atlantic is a better bet than testing your manhood against Southern Cal. Here are a few random samples of the non-conference slates played by previous AP national champions.

1978 Crimson Tide: Nebraska and USC at home, Washington and Missouri away.

1963 Longhorns: Navy and OU in Dallas, Tulane and Oklahoma State at home.

1975 Sooners: Oregon and Pitt at home, Miami away and Texas in Dallas.

1993 Seminoles: ND and Kansas away, Florida and Miami home.

There are a few good games in that list. Oklahoma playing BYU and Miami is certainly a cut above the rest. But shame on Penn State who made a late dash to sign TCU but were turned down because they refused a home-and-home. And on Texas and Wisconsin who flirted with each other but chickened out.

So this September, while you're flicking through the dial looking for something other than a ten touchdown home romp to watch, think about this. Before 1998 the average schedule of a major college football power consisted of all home-and-home series against equally weighted division 1 programs. Unless you cheer for Florida or Tennessee, you might never have seen your alma mater play a significantly smaller program in your life before the last ten years.

When you're at home watching Nebraska opening at home with Florida Atlantic, think back to better days, when Bud Wilkinson's Sooners volunteered for losses against Frank Leahey's Fighting Irish, or John McKay's Trojans butted heads with the Bear's Tide because they could.

And if you don't like what we have now, thank the BCS and your local athletic director's general lack of guts.

*(FSU only started football in 1947 and their first 15 years are not representative of what the program is now. Their schedules before 1965 totally skewed my data so I omitted them).