Between 1922, when BYU football formally began its history, and 1971, when Tommy Hudspeth retired, the Cougars’ combined record was an underwhelming 174-235-22. Worst of all, the record head-to-head against hated rival University of Utah was an awful 7-37-4. A remote location and strict school behavioral codes made recruiting the best athletes a nearly impossible task. Even LaVell Edwards was not able to do that. After ten years as Hudspeth's assistant Edwards knew the BYU program and knew how to bring in the best players he could possibly attract to Provo. More importantly, he quickly proved that he knew how to coach intelligence, vision and maturity – on and off the field. Edwards didn’t care that Provo was remote, or that BYU is a church school, or that Utah is sparely populated. He told a reporter at the height of his career: 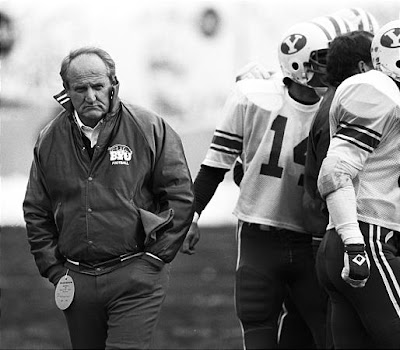 Prior to the Edwars era BYU had only a single WAC conference championship, earned in 1965. LaVell was not intimidated. In his time he was a visionary coach and became the first in the modern era to use a pass-happy attack to minimize the effect of his inherent talent disadvantage. Edwards’ teams ran out of base offensive formations with four and five wide-outs decades before that approach became fashionable or even accepted. When Edwards started, Woody Hayes was still running the Split-T and did not have five wide-outs on his depth chart. Darrell Royal famously warned that of three possible outcomes when throwing the ball two are bad. Levell Edwards defied that conventional wisdom and always argued:

“I just don’t see down field passing as a high risk offense; the wishbone is high risk.”

Edwards coached his players to play with their eyes and brains. BYU moved the ball steadily with short gains taken when the quarterback saw his first opportunity. But Edwards always coached his players to read missed coverage and exploit numerical advantages down field if defenses offered the opportunity. They frequently did. As a result, BYU became known as “Quarterback U” with a string of stand-out all-America passers including Jim McMahon and Steve Young. Edwards’ system and his often underrated teams turned BYU football around, winning an amazing eighteen conference championships between 1974 and 1999. An outstanding twenty-eight year head coaching career reached the ultimate height in 1984 with an AP national championship that would have been unthinkable two decades earlier. Perhaps most importantly of all, Edwards went 22-7 against the Utes.

Understandably the memory of Edwards’ achievement is largely tied up with his eye-catching offenses. Celebrating offenses is always easier than recalling the great defensive names and plays. Fans and commentators alike love scoring, and obviously scoring wins games in the most literal sense. Edwards’ BYU teams rarely featured highly ranked defenses. They didn’t really need to. But in 1984, the crowning year of Edwards’ superb career, one defensive stand that required a single great defensive play changed the course of BYU football history. Without that one play, in that one stand, on that one day, BYU would never have posted its break through year. Kyle Morrell’s acrobatic goal-line tackle on third-and-goal from the one at Hawaii seemed very important even at the time. In retrospect, it was the single moment of defensive inspiration that preserved an ostensibly offense-driven legacy. 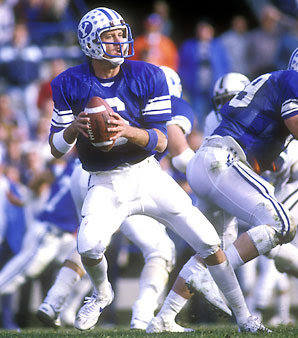 Through the 1984 season BYU averaged 340 passing and 479 yards total offense per game, leading the nation in both categories. Only twice in a perfect 13-0 campaign did the Cougars score below 24 points and never less than 18. They scored 30 or more on nine occasions. Robbie Bosco’s 283 of 458 passes for 3,875 yards and 33 TDs were second in efficiency only to Doug Flutie. But BYU was far from an offense only team that won gaudy shootouts. The defense at times gave up large chunks of yardage and only four opponents failed to score at least 13 points, but BYU only gave up more than 17 points twice and pitched two shut outs. It was actually the Cougar defense that got the magical campaign started, carrying BYU to a 20-14 win in a brutal season-opening slug-out at third ranked Pitt [ESPN’s first ever live televised college game, incidentally]. But even in that game, Edwards’ offense made the most memorable play. Despite a slow start, Bosco finally came to life late and hit receiver Adam Haysbert on a deep “go” route for a 50 yard TD to take the lead with only 1:40 remaining.

Three weeks later, thousands of miles from home in sunny Hawaii BYU needed its defense to deliver the team again. On that occasion a defensive play actually made the headlines that the unit as a whole deserved. Morrell again struggled to find his grove in an intimidating road environment and after three quarters BYU led only 12-10. Early in the fourth quarter Hawaii quarterback Rafael Cherry began a drive inside his own fifteen that ate ten minutes of clock and took his team to the BYU two yard line for first and goal. BYU was ranked #6 and national championship speculation was only just beginning. No one knew how much was ultimately on the line as Cherry ran two sneaks, both into punishing tackles from BYU linebacker 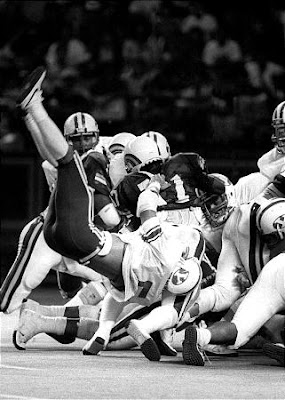 Marv Allen. With the clock winding and BYU’s offense unimpressive a Hawaii touchdown seemed likely to decide the game. After gaining 18-inches on two sneaks Cherry’s chances of making 6 more on another looked good. Hawaii attempted the same play again. Defensive tackle Jim Herrmann surged forward, leading his unit to the crucial push they needed. Herrmann did not know that behind him safety Kyle Morrell had lept over the line, somersaulted in mid-air, flipped over Cherry's head and pulled him backwards by the jersey while landing.

Morrell said later that he saw Hawaii's running backs shuffling forward, unwittingly signaling to the defense that they were running the same play. With all the quick-thinking intelligence and commitment of an Edwards coached player Morrell moved almost on instinct. His grab pulled Cherry back for the split second it took for Herrmann and co. to fill the gap with a pile of bodies and kill the play. After failing to make two-yards on three plays Hawaii coach Dick Tomey panicked and sent out his field goal unit. Bouyed by the momentum of the inspirational stand Bosco finally found his rhythm and led the Cougars to a game-killing score.

BYU escaped 18-13 and never lost their offensive grove again the entire season. The Cougars became one of only two national champions to lead the nation in passing offense [the other is 1938 TCU]. Edwards’ offenses received much deserved accolades, but as is so often the case, the entire superstructure rested on defensive performances that garner far less praise. Without one play in particular, BYU’s national championship simply would not have happened.