I came up with the idea of surveying this question because I was wondering about the historical context of the current titanic Urban Meyer-Nick Saban death struggle. It seemed to me that the SEC has a richer, or at least broader, coaching tradition than other conferences, which have often been dominated for almost their entire history by two or three powers (the Michigan-Ohio State, OU-Nebraska, and Texas-Texas A&M/Arkansas rivalries spring to mind). But in the SEC Alabama, Tennessee, Mississippi, Georgia, Auburn, LSU and, more recently, Florida have all had one or more great coach who built regionally and nationally prominent programs. Even Kentucky, Mississippi State and Vanderbilt have enjoyed brief moments of regional significance. Through all that long and rich history, one pattern emerges. In every generation of SEC football two coaches seem destined to rise above their peers and wrestle for conference dominance (and usually with it national supremacy). 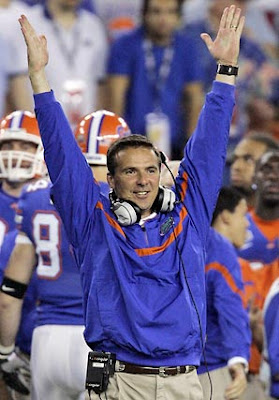 At present the SEC boasts the best group of coaches in college football. But amongst them all the resumes of two stand out. Heading into the 2009 season Urban Meyer's overall record as a head coach stood at 82-17 and 43-9 at Florida. He has won two BCS championships and has one undefeated season. Between Utah and Florida his teams are unbeaten in three BCS bowl appearances. His teams have won two Mountain West Conference titles (in two years) and two SEC titles. At the time of writing, Meyer's winning percentage at UF is significantly better even than Steve Spurrier's (even discounting shameless trouncings of the occasional rent-a-victim non-conference foe).

Nick Saban has a BCS championship of his own. His record heading into 2009 was 110-50-1. At LSU he went 48-16 with two conference titles. His Toledo team won the MAC in his only year as head coach, and his best Michigan State team finished second in the Big Ten (no mean feat at MSU - ask anyone who's tried).

Though Saban and Meyer between them have dominated the SEC since 2000 it was not until Saban took the Alabama job in 2007 that the two coaches' careers actually collided. Fittingly it was not until last year's SEC championship game that they actually coached against one another. After a 7-6 campaign in which much wheat and chaff were separated Saban's Tide went 12-0 in the 2008 regular season. When #1 Alabama and #2 Florida met in Atlanta the teams went blow for blow through three quarters before the stamina of the younger Crimson Tide waned. In the final analysis, three third down plays inside the Alabama ten-yard line that Tim Tebow completed for touchdowns in tight coverage made the difference. 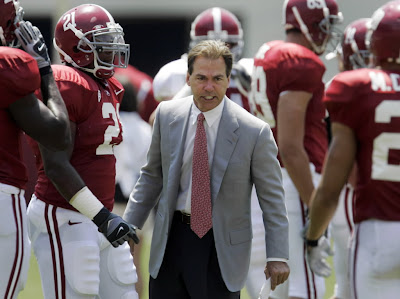 Webster's dictionary defines the word monomania with this picture

This also reflects a long standing trend in SEC coaching rivalries. The difference between two giant programs is often made by the presence of a special player who rises above the crowd. That was true for Paul Deitzel with Billy Cannon, Johnny Vaught with Archie Manning, Pat Dye with Bo Jackson, Vince Dooley with Herschel Walker amongst others. With every consensus top 3 recruiting class Meyer and Saban rein in, the chances that they rather than another SEC coach will find the next generation's special talent increases.

At the time of writing Florida and Alabama are first and second in the AP poll. Both are undefeated. The chances that Saban and Meyer's next bout will come this December in Atlanta seem high. It seems equally likely that this ongoing battle will define SEC football for the foreseeable future. 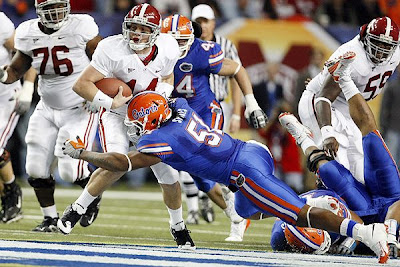 Probably the first of many.

[Update: ﻿The Meyer-Saban coaching rivalry will not be deciding the near future of SEC football greatness so much as the Myer-Miles rivalry. Who saw that coming? Look for Bama and Ohio State to renew this rivalry in a major post-season game sometime soon.]
Posted by Sam Negus at 11:18 PM