In the earlier part of this decade I lived for two years on the campus of Georgia Tech (though not actually enrolled at the school). During those years I went to quite a few Tech football games. Most people outside of Atlanta don't know as much, but Georgia Tech has a lot of very fun and rather peculiar campus traditions. They are mostly there to keep the students from going insane because life is hard when the only pictures in your text books are diagrams involving Greek letters and squiggly lines and there are approximately three females to share between every seven males.

One of those traditions at football games is that after the third quarter the band always plays the music from the song in this totally awesome-tastic, old-timey Budweiser commercial:

It may sound lame, but it's fun. So much fun that while I was "at" Tech the students would stay until the end of the third period no matter how badly the Jackets were getting licked just to do that song/cheer before heading back to their dorm rooms to meet their online role playing game friends and complain about how badly Chan Gailey's play calling sucked. But no one ever explained to me why the band always did that song. I'm not sure anyone actually knew.

Then today I was listening to the ESPN U college football podcast and Beano Cook, who invariably fills his sentences with random, unprovoked pieces of invaluable information from days of yore, mentioned that back in the late 1960s when the NCAA finally allowed television broadcasters to sell advertising slots to alcohol distributors during college football games they had certain restrictions. Those restrictions included a stipulation that liquor commercials could only appear after the end of the third quarter [obviously to limit the amount of time alcohol advertisers could purchase]. Back in those days the average CFB game only ran around 18-20 commercials, took about 45 minutes less time than today's marathons (unless you count Notre Dame on NBC in which case they took about 8 hours less), and breaks generally only included a single ad. So back in the early 1970s it was likely that the third quarter break in most televised college football games consisted exclusively this awesome Bud commercial, nay, work of art. The GT band started playing the same tune at their own games as an amusing parody during the 1970 season when Bud Carson was their coach. And they never dropped it.

I think this is brilliant and so wonderfully Georgia Tech. Firstly, by the standards of your average football crowd joke, this is at least somewhat clever. Secondly, forty years later they're still doing the same thing even though most GT students have probably neither seen the commercial nor heard of Bud Carson. That's the way they roll in midtown Atlanta: nerdy and old-school. 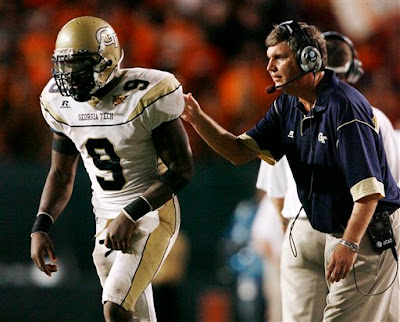 Speaking of old-school... just how old-school is Paul Johnson? There are so many reasons to love what he's doing at Tech. This is a man who has made his career on the back of an offense that his contemporaries view as antiquated. Now Johnson is so out of style that he's all the way back in vogue as the flavor of the month. You also have to love that his offenses keep rolling up yards even though the other team knows exactly what is coming. But most of all, I just love to see Georgia Tech winning again. This is a school that was a national football power and perennial Notre Dame rival back when every school in the entire South sucked hard core except them, Bama and Tennessee.

Take a look at the box score from GT's recent home upset of the Hokies. One completed pass and an interception in only seven, count 'em VII - SEVEN - attempts passing for 51 yards with a whopping 309 yards rushing and 4 touchdowns. These numbers are so old school you pretty much have to go back to the fall of 1906 to find fans who wouldn't scratch their heads at them.

The forward pass was introduced by the NCAA rules committee after the public outcry following a brutal 1905 season. The rule was envisioned initially as a play that would be run behind the line of scrimmage laterally to remove bodies from the tackle box and prevent deadly scrum collapses. It surprised people when coaches tentatively, and at first infrequently, began to use the rule to advance the ball vertically down the field. 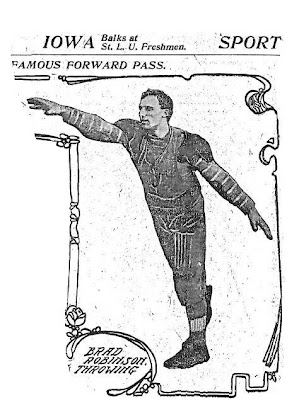 In his 1994 book The Anatomy of a Game: Football, the Rules, and the Men Who Made the Game David Nelson's book attributes the first collegiate forward pass to Bradbury Robinson of St. Louis University on September 5th 1906. Similar passing plays wowed fans across the nation on the rare occasion coaches plucked up the courage to try the move throughout the 1906 season. Most pundits felt the fad would not catch on.
On September 27th the New York Times reported forward passes in the Carlisle-Villanova game the preceding day and commented:

"The passing was more of the character of that familiar in basket ball than that which has hitherto characterized football. Apparently it is the intention of football coaches to try repeatedly these frequent long and risky passes. Well executed they are undoubtedly highly spectacular, but the risk of dropping the ball is so great as to make the practice extremely hazardous and its desirability doubtful."

This is no doubt similar to the kind of reception Tech's 51 yard completion must have received in the stands at Bobby Dodd Stadium on Saturday. Concerned Tech alumni must have turned to one another and said:

"Golly-gosh darn it, friend. What the jimminy is that coach Johnson fellow playing at, having that poor Nesbitt chap attempt one of those risky, new-fangled forward passes!"

And quite right they are, too. When you can lay 309 yards on a VT rushing defense that had averaged only 95 ypg allowed against teams not named Alabama, why pass? GT clearly doesn't need to. So in the age of five-wide out, run-and-shoot, air-raid madness: crack open a nice cool Bud, Paul Johnson. You've bloody well earned it! 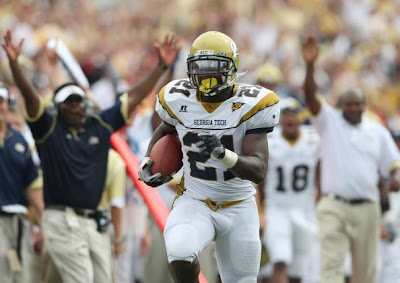