At the time of writing the Oregon Ducks control their destiny regarding a berth to represent the West Coast in the Rose Bowl. That, to say the least, is a rare and note worthy occurrence. The long history of Oregon football is less than glamorous.

Of head coaches whose tenure exceeded five seasons, only one left Eugene with a winning percentage above .700 – Hugo Bezdek who went 29-10-4 between 1906 and 1917. Since WWII only three coaches have exceeded the .500 mark. Oregon boasts only two outright conference titles and none prior to 1994. Two of its five shared conference crown predate the war, as do two of its four Rose Bowl appearances. Until Rich Brooks’ later years the football gods were seldom kind to Oregon. The Ducks won their first ‘Tournament of Roses Game’ over then-mighty Penn in 1917, but lost three years later to Harvard. By the time the Ducks returned to the less cumbersomely re-named Rose Bowl in 1958 few living could even remember the 1920 game and most of football’s rules had dramatically changed.

Caught between regional rivals located in more populous and glamorous areas the state of Oregon languished as West Coast football’s backwater. The state lacked a truly major metropolitan area and could neither produce nor recruit the kind players Washington, UCLA, Stanford and USC had to spare. To date, hated in-state rival Oregon State only has five conference crowns, and none outright since 1956, to show for its twelve decades of football. The Beavers have even managed fewer trips to the Rose Bowl, technically. It simply has always been difficult to win football games in the state of Oregon; which makes the 1957 season all the more remarkable. The annual ‘Civil War’ match-up took place in Eugene on November 23rd and both teams sat at 7-2 overall with the Ducks leading the conference by a game. After Oregon State squeezed out a 10-7 victory the two schools shared the conference crown [those being the days before some man of genius came up with the revolutionary ‘tie-breaker’ concept], improbably locating two of their combined twelve all-time conference titles in the same year.

The Pacific Coast Conference’s prohibition on back-to-back bowl appearances kept the Beavers from heading to Pasadena, despite their head-to-head tirumph. Instead, the Ducks went south for the New Year to meet Ohio State and their young, ambitious coach Woody Hayes. The buckeyes had started slowly under Hayes, who was a controversial hire over fan-favorite Paul Brown in 1951. His irascible personality made every new job a difficult transition. But once Hayes entrenched himself, got his way and recruited the players for his power-running, line-heavy T-formation offense the sea quickly changed. A 10-0 campaign behind the sprightly running and lightning pace changes of all-American and later Heisman trophy winner Howard “Hop-along” Cassidy brought Hayes a Rose Bowl and AP crown in 195 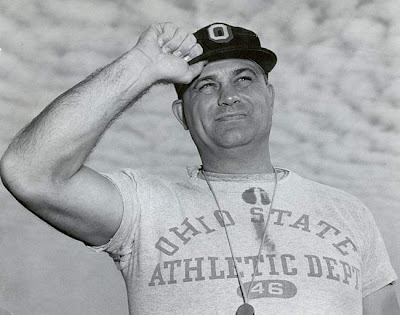 4. Only conference rules prevented a repeat trip to California as Big 10 champion the following year. Despite a four-point season-opener home loss to defending Cotton Bowl champion TCU, by New Year’s Day 1958 the Buckeyes were 9-1 and had already been voted UPI coaches poll national champion. There was no explosive Cassidy, but bruising sophomore Half Back Bob White ground out yards as well as any uphill runner in the game and would be a consensus all-America selection the following season. Vegas set the line in favor of Hayes’ team by a daunting 19.5 points. That was quite a statement for a team whose unglamorous and gritty but effective offense was joking characterized as “three yards and a cloud of dust.”

The Ducks were perhaps similarly gritty, but they lacked the depth and pedigree that allowed Hayes' boys to consistently win at the highest level without any concern for offensive variety. Leonard Casanova served as head coach in Eugene for sixteen seasons, going 82-73-8. Not until Mike Belloitti earlier this decade did an oregon coach pass that total with a win parcentage still above .500. Casanova simply did the best job he could with the players he could find. He introduced no offensive innovations. His teams did throw the ball when they needed to, which was unfortunately slightly more often than their talent-rich rivals. At least in 1957 Casanova had a quarterback in Jack Crabtree who could throw with some confidence.

The Ducks executed fundamentals well enough to compensate for their talent gap and at one point reached 6-1 overall and were unbeaten in conference, only a three-point in Portland versus Pitt darkening the resume. Oregon eventually lost two conference games, though none by more than a touchdown. Only once all year did their disciplined defensive play allow give up more than thirteen points. Why the odds makers set the line so high should have been a mystery. Certainly Casanova saw it as an insult and showed his players newspaper clippings to enrage and inspire them heading into the New year's Day showdown. 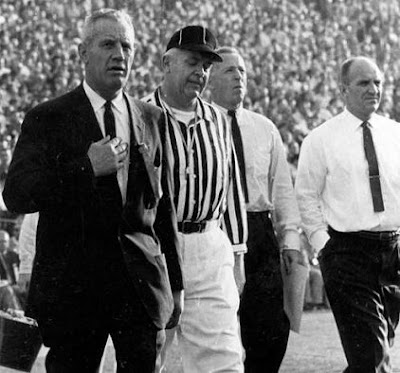 Casanova knew exactly what the Buckeyes would bring. Hayes never built his success on surprise, variety or complicated scheming. The Ohio State legacy has always been one of power, execution and stamina. Naturally observers presumed a long, brutal day was in store for the Ducks when on the first possession of the game the Buckeyes drove seventy-nine yards sustained by two 3rd down conversions for a touchdown on a short plunge from quarterback Frank Kremblas. The drive was vintage Buckeye football – short runs between the tackles behind bruising blocking and devouring clock. Kremblas would finish the day with characteristically anemic passing numbers, going 2 of 6 for 59 yards. But Woody Hayes quarterbacks were coached to choose between hand-offs and keepers, not to check down field for open receivers. Kremblas made his usual contribution on the ground and was aided by 93 yards on twenty-five carries from White and a further 82 on fourteen from the fullback Don Clark. Methodically, the ever reliable Buckeye ground game compiled an impressive 245 yards team rushing and 19 first downs. The Oregon response however was something no Buckeye had counted on. 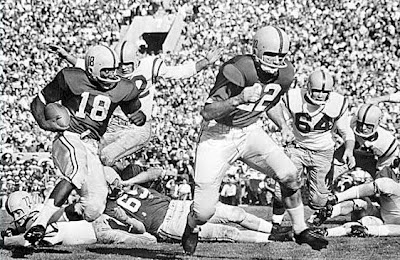 Frank Kremblas blocking for Don Clark
An over-matched Oregon team might understandably have collapsed after the morale crushing blow of an early score by a powerhouse program that rarely relinquished a lead. Instead, undersized Ducks began standing up more highly touted players at the line of scrimmage and the crucial third down conversations for Ohio State dried up. For the rest of a long, physical game Oregon players found the extra effort to manufacture huge defensive plays inside their 30-yard line. For all their total production the Buckeyes did not find the end zone again. Early in the second quarter Crabtree engineered a drive of his own, leading his team eighty yards on ten plays that finished with a five-yard touchdown run from Jim Shanley. Casanova knew he could not hope to beat Woody at his own game. The Ducks approach was one of balance, keeping the Buckeyes guessing rather than make a futile attempt to run over them. 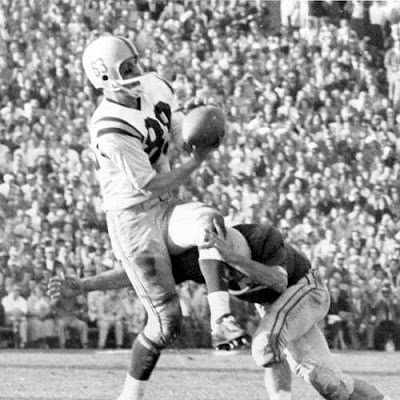 The approach worked. Oregon outgained Ohio State with 351 total yards and 21 first downs, coming from an almost even 160 yards passing and 191 yards rushing. Shanley rushed for 59 yards and Jack Morris for 60 on eleven carries each. The Ducks did not have a back like White to simply hand off to twenty-five times, but they had Ron Stover who hauled in ten passes for 144 yards. At quaterback Crabtree accounted for 135 yards passing, the other twenty-five coming on halfback tosses that helped keep Ohio State guessing and created breathing room for the run game.

In the end, a game that was supposed to have been defined by Buckeye power came down instead to Oregon’s failure to close. The game remained tied late in the third period when a Duck drive stalled at the OSU twenty-five. Jack Morris hooked a field goal try, failing to add precious points to his solid contribution of rushing yards. The Buckeyes took over and Kremblas led a fifty-six yard drive that ate all of the remaining third quarter before retaking the lead on a thirty-four yard Don Sutherin field goal early in the fourth. The rest of the game was all Oregon, with the Ducks driving to the OSU twenty-four before Stover fumbled and lost a twenty-three yard reception that had Oregon in range to at least draw level. The Ducks' final chance began on their own seventeen yard line but quickly penetrated Buckeye territory after a thirteen yard Stover reception and a pass interference flag on a rare mental error that indicated an increasingly panicked Ohio State approach to the Oregon passing attack. With the clock winding down Crabtree looked downfield for Stover on every play, allowing Ohio State a measure of certainty in defending Oregon plays they had lacked all afternoon. Without the threat of balance Oregon stalled for the last time. Two incompletions sandwiched a six-yard run to set up fourth and four near the Buckeye forty. Crabtree again looked for Stover and the ball once again fell incomplete with forty-seven seconds to play.

Three of Crabtree’s seven incompletions came on that final set of downs. Casanova’s resourceful team did not punt all day. But the Ducks lost two fumbles and missed a field goal. The difference between Hayes’ great Ohio State team and Casanova’s Ducks, who were only in Pasadena due to league rules, was projected to be almost three touchdowns. Instead the difference was three mistakes from three players who otherwise performed outstandingly on a day that constituted the high water mark of Oregon football history until the 1990s.

Woody Hayes accumulated thirteen Big Ten championships and three national titles. His teams were perennial powers. The 1957 Pacific Coast Conference championship, shared with a hated in-state rival, proved to be Casanova’s only title. His Ducks never came close to even smelling a national crown. But for a single afternoon on January 1st 1958, amongst the pageantry and possibility of the Rose Bowl, very little separated Buckeyes and Ducks.

That was the first meeting of those two programs. On six successive meetings no Oregon team came ten points of victory. This year, on January 1st 2010, Oregon may get another shot. 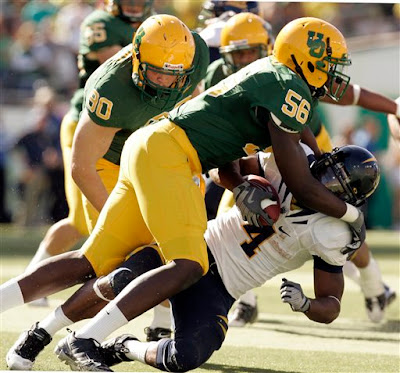 If Oregon does play at the Rose Bowl, here's hoping they wear these. God save us from their other uniforms.