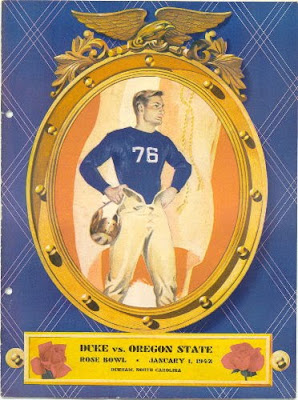 Oregon State has played in the Rose Bowl on a grand total of three occasions, winning only once. On New Years Day 1942 the Beavers travelled to Durham, North Carolina to play the only Rose Bowl game ever to take place outside of Pasadena. Less than a month removed from the Japanese attack on Pearl Harbor, military authorities on the West Coast feared that a packed stadium would present an appealing target to enemy bombers. University administrators had no cause for confidence that Oregon State would get another shot at the Rose Bowl any time soon so they agreed to take the game east and play Wallace Wade’s Duke Blue Devils on their home turf. A 20-16 victory vindicated their decision. Oregon State is still waiting to add a second Rose Bowl championship to their tally.

Wallace Wade’s version of the single wing revolved around the play calling and backfield blocking of stand-out quarterback Tommy Prothro. The Tennessee native played his last college game against the Beavers before passing up the NFL draft for an assistant coaching job at Western Kentucky. He served the last two years of WWII as a U.S. Navy Lieutenant before spending eight seasons as an assistant to Harold “Red” Sanders at Vanderbilt and UCLA. In 1955 Prothro succeeded the disastrous 20-36 tenure of LaVerne Taylor in Corvallis. Like his mentors Wade and Sanders, Prothro ran the single wing, sticking with the system long after it went out of vogue elsewhere. His offenses were not imaginative but Prothro was a thoroughbred coach. His father had coached pro baseball, including a long career with the Philadelphia Phillies. He proved more capable than any Oregon State coach before or since of installing in his teams a collective ability to consistently master the fundamentals. Without upgrading the talent he inherited in 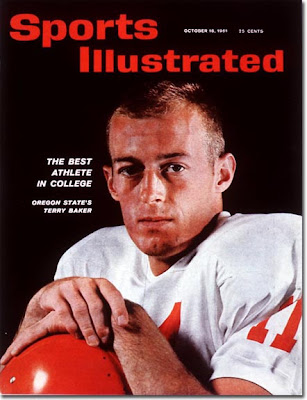 1955 Prothro improved a 1-8 team to a 6-3 record. He led Oregon State to their second and third conference titles the following two seasons and repeated the feat in 1964. His 63-37-2 record over ten seasons gave him the best winning percentage of any State coach in the modern era until Dennis Erikson. He led the Beavers to both of their only Rose Bowl appearances since the war and also coached the school's only Heisman Trophy winner in 1962, Terry Baker.

Like buses coming along in twos after near eternal delays, football success in the State of Oregon in the twentieth century is largely clustered around the 1950s. Protho's successful career Corvallis coincided with Leonard Casanova’s relative fat years in Eugene. The in-state rivals have met 112 times to date with the Oregon Ducks leading 56-46-10. On Thursday December 3rd the 113th meeting will decide the Pac-10 championship and the winner will meet Ohio State in the 2010 Rose Bowl. Prior to the 2009 season the ‘civil war’ has provided a de facto conference championship game only once in eleven decades.

On November 23rd 1957 Prothro’s Beavers headed to Eugene to face Casanova’s Ducks. Both teams stood at 7-2 overall. Oregon had a game lead in the Pacific Coast Conference standings at 5-1 and had already secured at least a share of the title. Due to the Conference’s prohibition on repeat bowl appearances Oregon State was ineligible for a trip to Pasadena regardless of the game's outcome. But pride, in-state bragging rights, and a conference co-championship were incentive enough -- especially to Prothro who had been on the receiving end of a 28-0 drubbing on his first trip to Eugene as a rookie head coach two years earlier.

Both teams had enjoyed offensive success all year, especially Oregon State who had scored at least twenty points in each of their eight wins and cracked the thirty point margin twice. They ran a power ground game behind text-book line play called by all-conference junior center Buzz Randall, who tragically died of leukemia shortly before what would have been his senior year in 1958. Team captain Ted Searle called plays and handled kicking duties. He was helped in the backfield by Hawaiian halfback Joe Francis and tenacious fullback Clarence ‘Nub’ Beamer. Nub earned his nickname from his relatively small size. At 5’10” and barely over 180lbs he was not a large fullback, but his vision and determination entrenched him in Prothro’s team when he earned his first meaningful playing time in the 1957 Rose Bowl. He came off the bench as a sophomore to gain 31 yards and a score on seven carries in the Beavers' losing effort against Iowa. Beamer’s success continued as a starter the following season, paving the way for an eventual NFL career. He later summed up the workman-like attitude Prothro established in Corvallis in an interview with his hometown newspaper: “[Prothro] was a man of few words. He wasn’t too much into giving pep talks… My fundamentals improved at OSU. I learned how to block and run better. He helped me get into the pros.”

Blocking and running were much in evidence in Eugene for the 1957 Civil War game. The Beavers' high scoring offense literally ran into the disciplined defensive play of Casanova’s Ducks. Only once all year did Oregon give up more than 13 points, and that in a 27-26 win over Stanford. The Ducks were not exactly revolutionary, but their play was at least balanced. Against State, Oregon made 109 yards on the ground and 101 through the air for fifteen first downs and a touchdown. For the era Jack Crabtree constituted a relatively prolific passer. He went 13 of 18 with a one yard TD reception by halfback Jim Shanley. In response, the Beaver’s archaic single wing attack was characteristically one dimensional [though by no means ineffective]. 217 hard fought rushing yards for thirteen first downs and a three-yard score from Francis contrasted starkly with -1 net yards passing on a single completion in a whopping three attempts.

The Beavers opened the scoring with a sixty yard drive on the game’s first possession, with Francis making thirty-three yards and the score. Shearle attempted to drive home the advantage with an onside kick but barely touched the ball and gave the Ducks a forty yard field to answer the score. Crabtree led Oregon to the one yard line and a fourth down before hitting Shanley for six rather than attempt a field goal. After a rapid start from two efficient and previously successful offenses the scoring dried up, replaced by a lot of bruising tackles on both sides. A seventeen yard field goal opportunity late in the third quarter offered Shearle redemption for his botched onside kick. He gladly took it, giving his team a precious 10-7 lead.

In the end, turnovers made the difference. The Beavers were not imaginative but rarely made mistakes. In contrast two of the five Crabtree passes that did not find an Oregon receiver were intercepted. More fatally still, late in the fourth quarter Oregon reached State’s two-yard line and threatened an imminent go-ahead score before Shanley fumbled the ball away. With the game in the balance Nub Beamer burst through Oregon’s line as Shanley plunged for the endzone. He crashed into the Duck standout and punched the ball from his flailing arm as he fell backward. Nub immediately pounced on the ball, icing both the game and a conference title. Points had been less-than-plentiful but the game had proved a thrilling one regardless.

For much of its history the Civil War has existed in the category of bitterly contested in-state rivalries of little greater significance that go largely ignored by outsiders. Mississippi’s ‘Egg Bowl’ and the Kansas-Missouri ‘Border War’ are two other notable examples. Only once has this rivalry actually mattered for both contestants in the grander context of a west coast championship. Fifty-two years later this December 3rd football fans should be ready for the rivalry to provide another classic.

And it better had, because we may have to wait another half a century for a third installment.