On a chilly, hostile November afternoon in East Lansing at the end of the 1966 season Coley O’Brien walked toward the ball at his own thirty-yard line. With a minute remaining, a keenly anticipated meeting between unbeatens No.1 Notre Dame and No. 2 Michigan State was tied at 10-10. Offensive mistakes on both sides had given opportunities that imposing defenses had staved off, including a first quarter Spartan fumble on their own four-yard line that produced no points for the Irish. With sixty seconds to play and seventy yards to go the football gods had given Notre Dame one last chance, but Ara Parseghian decided controversially not to take it. The Spartan defense lined up expecting a deep ball. When O’Brien handed off for two consecutive short-yardage running plays without any apparent urgency reality dawned on the now disgusted Michigan State players. As a cacophony of boos rained down from the stands Spartan defenders added their own insults and taunts.
Senior Defensive End Charles “Bubba” Smith yelled: “Come on, sissies.”

Linebacker George Webster shouted across the line of scrimmage to the Irish players in their huddle: “You’re going for a tie aren’t you? Get of the field, you’ve given up!”
Parseghian calculated correctly that Notre Dame’s prestige and polling power would deliver a national championship despite the school’s policy of refusing bowl bids and a record blemished with a tie. Sports Illustrated writer Dan Jenkins led the charge of outraged journalists lobbying for pollsters to “punish” Notre Dame. Jenkins sarcastically wondered whether Parseghian had exhorted his players to “Tie one for the Gipper!” But appeals for AP voters to bestow the title upon Bear Bryant’s Alabama after the Tide dismantled Bob Devaney’s Cornhuskers in the Sugar Bowl fell on deaf eras. Notre Dame’s emotional grip on football pollsters could not be broken. That fateful game in Spartan Stadium on November 19th 1966 has been defined in football lore and memory ever since by Parseghian’s somewhat cynical and certainly ignoble calculation. The unbeaten Spartans somehow got lost in the story, playing only the role of unmemorable dancing partner to the real actors from South Bend.
The outcome of that game and its subsequent place in college football history is highly lamentable. November 19th 1966 would more rightly be remembered as the last game of two incredible seasons for the best ever Michigan State defense. Smith and Webster, two time all-Americans of outstanding pedigree, should have finished their careers in East Lansing as they had spent every preceding minute — hustling like the hounds of hell and running over helpless opponents in pursuit of victory. Instead, Parseghian’s conceit and the Big Ten’s nonsensical prohibition of repeat Rose Bowl performances forced the Spartan stand-outs to play end their years in the collegiate game on a low note of anger and frustration.
The 1965 and 1966 seasons remain the high watermark of Michigan State football history. Had the home fans known that November that more than forty years later they would still be awaiting a second performance as repeat Big Ten champion they would probably have rushed the field looking for blood. In fact the Spartans have only claimed a single outright Big Ten title and shared two more in the forty-four years since. The explanation for that all-too-brief high summer of success and the juxtaposing drought that has followed is surely the basic philosophy of the State’s head coach, and his laudable lack of racial prejudice. 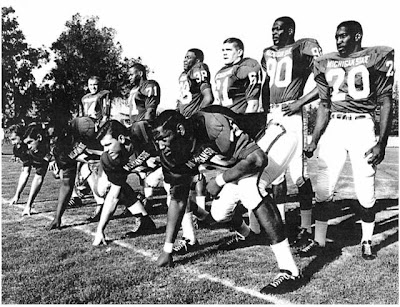 Duffy Daugherty played his college ball at Syracuse without much distinction before serving in WWII. After the war Daugherty returned to Syracuse as an assistant to his former coach Clarence “Biggie Munn. Daugherty followed Munn to Michigan State in 1947 and was an integral part of a staff that coached the Spartans to successive unbeaten campaigns and national titles in 1951-52 and a shared conference title in State’s inaugural Big Ten campaign in 1953. Daugherty succeeded Munn as head coach the following year, but with the exception of a Rose Bowl victory and a second place AP finish in 1955 he largely failed to match Munn’s achievements until the mid-1960s. 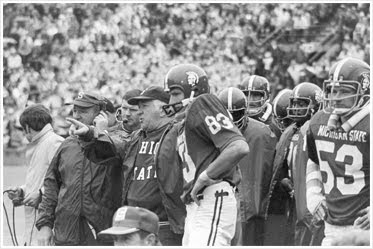 Daugherty assumed a jocular persona, always having a quip on hand. Publicly he discussed his work as a coach in an almost flippant tongue-in-cheek manner. He brushed off the stresses of the job, such as the pressure to win, with whimsical cracks such as: “The alumni are always with you, win or tie.” But behind the revelry everyone knew that Daugherty took the game very seriously indeed. His ability not to take himself too seriously allowed him to see that victory did not depend upon some revolutionary system or stroke of genius he might contribute. Rather he frankly admitted:

“The reason you win is because you’ve got more good players than the next guy. Most football games aren’t won on the field. They’re won from December to September, when recruiting is done.”
If winning meant finding and fielding the best available players Daugherty didn’t care who they were or where they came from, as long as they wanted to play for Michigan State and would play hard. College football’s color barrier had been broken in the north and west long before Daugherty assembled his great teams of the mid-1960s. Ernie Davis won the Heisman playing for Daugherty’s alma mater four years before his first conference championship. But there still remained an unwritten rule at northern schools that coaches would only field a few black players. For whatever reason, coaches only played the very best black athletes on otherwise lilywhite teams. The 1966 Fighting Irish, for example, who eventually won the AP title over the an unbeaten Alabama team which eastern sportswriters unfairly associated with their state governor’s impetuous stand on the schoolhouse steps, fielded only one black player. Daugherty didn’t care if his entire team was black. His coaches scoured the south, finding young athletes barred from playing for schools in their own states and bringing them to East Lansing. 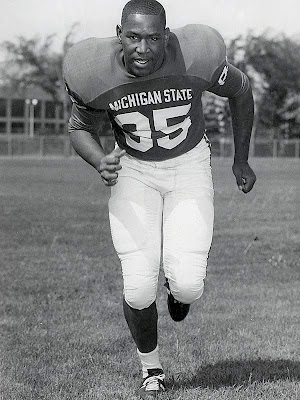 When the towering Charles Smith left Beaumont, Texas in 1962 aged eighteen he had never had what he would call a “real conversation” with any white person. He later joked that he never seen nor heard of Jews and was surprised to learn in Michigan that there were different types of white people. Regardless of any culture shock Smith felt the 6’7” 280 lb giant settled down to play probably the best defense of any player in Spartan history — he is still the highest drafted player ever from Michigan State. Smith moved his huge body with frightening speed, reaching opposing backfields with apparent ease. Coley O’Brien only saw the field for Notre Dame in that famous 1966 game because Irish starter Terry Hanratty suffered a separated shoulder early in the first quarter when Smith leveled him behind the line of scrimmage. Moving with speed and hitting with brute force Smith quickly established himself as both the anchor of State’s line and the spearhead of its pass-rush. 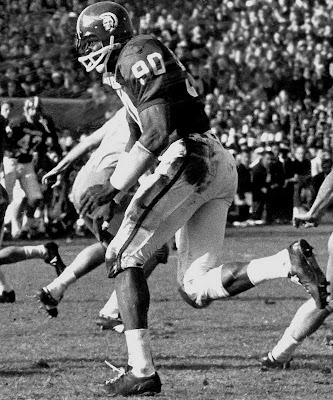 Behind Smith's defensive line Daugherty built a flexible unit based on speed that looked more like modern defenses designed to stuff the spread than its Big Ten peers. At the heart of the unit was hybrid Safety/Linebacker George Webster. The 6'4" 225 lb South Carolinian was as fast as any Big Ten receiver and strong enough to single-handedly lay out any running back. Webster played with an insatiable intensity. State's defensive captain Cornerback Don Japinga called Webster the greatest footballer he ever played with or against. Japinga said of Webster:
"He literally punished every ball carrier."
Directing the Spartan Linebacker core another southerner flew to the ball with enough ferocity to earn the moniker "mad dog". Charlie Thornhill of Roanoake, Alabama would never have even found East Lansing without the intervention of the very image of Dixie's football establishment, Bear Bryant. Thornhill scored over two-hundred points as a senior running back and became the first black athlete to earn player of the year accolades from Roanoake's Touchdown Club. Thornhill was surprised and thrilled to find Bryant at the awards reception and even more surprised when the living legend asked him where he planned to attend college. Thornhill had an offer from Notre Dame, but Bryant asked him to wait on committing until he made a phone call. 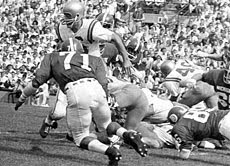 That call went to Duffy Daugherty. On Bryant's recommendation Michigan State offered Thornhill a scholarship. The Bear chaffed under the frustration of his state's system of racial segregation. No one ever accused Byrant of progressivism, but he like Daugherty didn't care about anything in his players but their attitude and ability. Ever the football-obsessed pragmatist Bryant simply wanted to win. He wanted the best athlete's and didn't care whether they were black, white, or green. He eventually led the SEC toward integration in the early 70s, a process eased by the stunning effortlessness with which the USC Trojans led by Fullback Sam Cunningham ran over the all-white Crimson Tide in Birmingham to open the 1970 season.
But the Bear wasn't only a self-interested glory-hunter. Until such a time as Alabama's political climate would accept his desire to recruit black students he went out of his way to steer young men toward northern schools that would actually put them on the field. As a freshman Thornhill had a misunderstanding and confrontation with a Michigan State assistant that left him buried down the depth-chart and ended his hopes of earning a spot at running back. When Daugherty finally gave him a chance to play some downs at Linebacker in drills between the starting offense and second-string defense Thornhill made tackles on six straight plays and absolutely blew-up State's starting quarterback. Neither he nor Daugherty ever looked back.
In Smith and Webster’s junior and senior seasons Michigan State went 19-1-1, losing only to UCLA behind the stunning play of sophomore sensation quarterback Gary Beban in one of the great Rose Bowl upsets. Going a perfect 14-0 in conference play through those two seasons the Spartans gave up only 34.6 rushing yards a game and held their opponents to a combine seven fourth quarter points. Smith and Co. never tired before the guys across the line. Daugherty, like most Big Ten coaches then and since, preferred a ball-control run heavy offense and a reliable defense. Defensive players in any color didn’t come any more reliable than Smith, Webster, and Thornhill. With talent of their caliber on the field, scoring against State proved virtually impossible.

In the years since that infamous Michigan State-Notre Dame game the football gods have not smiled on East Lansing. Spartan coaches have struggled to attract the best players to State — the less storied and fashionable school in Michigan. Even as the Daugherty’s greatest team claimed its second straight Big Ten title, changes were afoot far to the south that eventually spelled the end of Sparty’s greatest era. Jerry LeVais, an undersized but speedy receiver from Smith’s own hometown of Beaumont had accepted an athletic scholarship from SMU in the spring of 1965 and became the first ever black player in Southwest Conference football history in 1966. Slowly but surely the SWC’s color barriers came down over the ensuing years. The University of Texas fielded its first back varsity football player four years later. Inevitably, as these institutions opened their doors to black players the pipeline of talent that created Daugherty’s great success dried up. If Bubba Smith were a High School standout today, the chances of him not signing to play for Mack Brown would be approximately nil.