When Larry Smith, a Bo Schembechler disciple, took over as head football coach at the University of Arizona in 1980 he inherited a program that had earned only two shared conference titles since WWII (both in the WAC), had never won a bowl game, and had finished in the AP poll only twice. Smith was not a high-profile candidate. Through the first three of his four seasons at Tulane he had won only seven games. But then, Arizona was not a high profile job. Preparing for its third season in the newly expanded Pac-10 Conference Arizona had been invited for its size, geographical location, and perhaps its 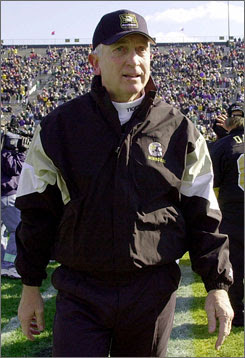 basketball program. Smith’s mandate was for solid, steady progress. He approached that mandate with a passion for the game, wearing his heart very much on his sleeve. He became emotionally invested in the University, eventually retiring in Tucson even after several subsequent head coaching stints elsewhere. Smith also invested in his players.

After his death in 2008 former Arizona linebacker Lamonte Hunley told the USA Today that Smith was extremely careful to listen to parents on recruiting visits. He spent time discussing the family’s goal for their child and whether Arizona was a good fit for those goals. He also promised to make football in Tucson fun; a promise Hunley believed he invariably kept. That approach allowed Smith to recruit a slightly better class of talent than previous ‘Zona coaches had managed. And with that talent he fulfilled his mandate for steady progress, improving his team’s record in each of his seven seasons. The Wildcats progressed from 5-6 in 1980 to 9-3 and the school’s first ever bowl win in 1986.

Smith worked hard recruiting players from across the West and nationally. Most were a modest upgrade for the program. Some were genuine first-class athletes such as slot back/punt returner Vance Johnson who was NCAA Long Jump champion in 1982. But in seven seasons of impressive progress Smith produced only one true great and consensus all-American — Lamonte Hunley’s older brother Ricky.

Ricky was no surprise as a collegiate star. His multi-sport performances as a Prep athlete in his hometown of Petersburg, Va. earned him attention from baseball scouts and he was drafted by the Pittsburgh Pirates. But as Hunley grew bigger and stronger it became increasingly clear that his best chance for a successful athletic future lay with football. At the time Virginia’s state schools were hardly successful football powers. Playing outside of the home turf of college football’s great programs Hunley did not garner quite the attention he might have received growing up elsewhere. This allowed Smith to pull off his greatest coup as Arizona head coach and bring Ricky to Tucson. 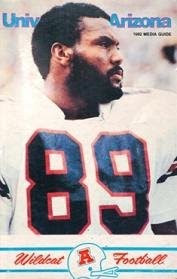 Hunley lettered four years as a bruising Inside Linebacker in Arizona’s 3-4 base defense. He entrenched himself permanently in the starting lineup only part way into his freshman season with a fourteen tackle performance versus UCLA, four behind the line of scrimmage. Standing at 6’2” with a playing weight of around 230 lbs Hunley was not freakishly big or even outstandingly quick for a college athlete. But his natural athleticism, ability to read the game, and continual desire to learn enabled him to rise above other players with similar or greater physical gifts. By the end of his junior season Hunley had amassed 224 career solo tackles and 166 assists, becoming his school’s first ever all-American in 1982.

As a senior Hunley added ninety-nine more solo tackles, seventy-seven assists, ten tackles for loss, five interceptions, five forced fumbles, three fumble recoveries, and repeated as a consensus all-America selection. Hunley terrorized opposition backfields and earned all-conference honors in each of the three years he started. After graduation Hunley was taken seventh overall in the 1984 NFL draft by the Cincinnati Bengals. When the young star’s agent presented a thirty-page proposal listing contract demands the organization felt were excessive a hold-out ensued. Eventually the Bengals traded Hunley to Denver for first and third round picks in the 1986 draft and a fifth round pick in 1987. Hunley’s starting deal of $1 million over four seasons, a $1.75 million signing bonus, and $60,000 of incentives caused enough of a splash to initially alienate several less well-paid Bronco veterans. But he eventually proved a sound investment, leading a solid defense that more-than supported John Elway’s offense en route to consecutive AFC championships in 1986-87. [Elway was certainly much happier watching Hunley from the sidelines as a Bronco than he had been running from him in Stanford’s backfield as a collegian.] 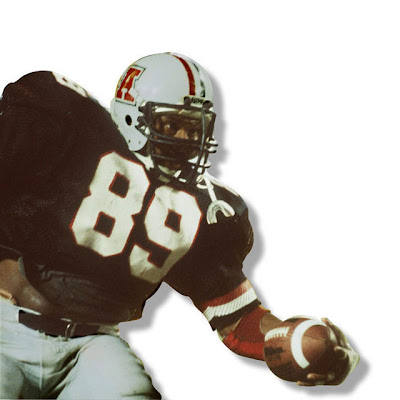 The Wildcat team he led as a senior started the season an unprecedented #14 in the AP poll and climbed to #3 after a 4-0 start — still the highest spot the school has ever reached. After reaching 5-0-1 three straight losses sent ‘Zona crashing out of the polls before two wins to finish the season salvaged some respect. Commentators believed the team failed to handle unfamiliar pressure at the business end of the polls. That was doubtless part of the 1983 Wildcats’ problem. But more importantly the position Smith’s team reached in week five was probably about as high as a team can reach with only one true all-American on the field. Defense is supremely important in football, though defensive stars are too easily forgotten. The fact is that an otherwise only modestly good team can achieve just about anything short of major championships with a 120 tackle-a-season linebacker like Ricky Hunley between the hash marks.