Joe Paterno has defined Old School football for so long that no one can remember when he was just School. Through the first ten years of his head coaching tenure in State College his Nittany Lions enjoyed the nation’s best overall record. Better than Woody Hayes’ Buckeyes, or Bob Devaney and Tom Osborne’s ‘Huskers. Better even than The Bear’s Crimson Tide. Because no one could ever argue with Paterno’s result they never criticized his methods either. The no-name, plain-uniform program still has a behind-the-times feel today, even in the almost universally stodgy Big Ten. But Paterno wasn’t any more up-with-the-times in 1975 — except that he won, and winning is cool.
Penn State did not have an athletic dorm. Paterno always worked hard first and foremost with all his recruits to sell the school and the collegiate experience. He told one Sport’s Illustrated reporter that he considered a home visit by a football coach to be “just about the worst” reason to select which university to attend. When young men visited campus Paterno often sent them out to wander around campus alone, and always insisted on academic meetings with faculty members in their prospective departments. Paterno wanted boys to want to attend Penn State, but not in the way that most football coaches want boys to attend their school. Joe Pa cared, and still does care, that his players truly sucked the marrow out of college life. For that reason he was outspokenly opposed to the NCAA’s 1972 decision to repeal its prohibition on freshman eligibility. Paterno’s view of the injustice of that move sounded out-dated and wildly idealistic even then, having more the ring of English professor than head coach about it:
“There's so much besides football. Athletes who come to Penn State shouldn't be tied down to a football program. These should be the four greatest years of their lives. I tell them, 'Enjoy yourselves.' I consider football an extracurricular activity, like debating or the band. It should never be removed from that context. More than 90% of our players graduate on schedule.” 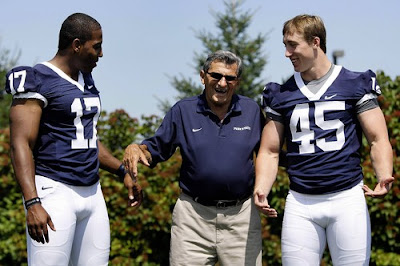 That was always Paterno’s way. Somehow his Nittany Lions won ball games without cheating, cutting class, or showboating. The “noble experiment” Joe Pa began in 1966 worked — spectacularly. And it worked not only because Paterno believed everything he said about fun, the college life, learning, attitude, and a host of other subjects, but also because he loved winning football games as much as any peer. Whatever he told reporters. 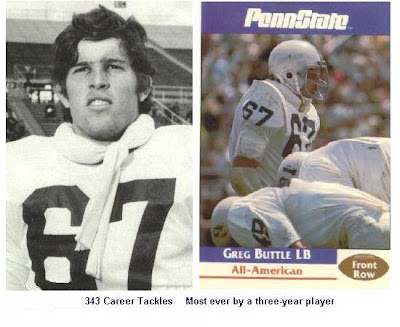 The archetypal Penn State football player would be workmanlike, diligent, unassuming, intelligent, well rounded, and quietly effective on the field. And he would surely be a linebacker. Call him Greg Buttle.

If Joe Pa’s offenses opened few eyes and his philosophy on college life seemed almost medieval, his defenses made up for it by setting plenty of trends. Penn State was one of the first college programs to run a 3-4 base defense and the four-man linebacker corps at the unit’s center was characterized by remarkable lateral mobility. Big enough to come up and crush the healthiest of running games, smart enough to read offenses on the fly, and fast enough to drop into coverage in an instant; Penn State’s linebackers seemed to simply emerge in an unbroken line of succession from a single mold. Unsurprisingly for a man who sixty years after his graduation is still tied for the all-time interception record at his alma mater, Brown, Paterno has always had an eye for defensive talent. And character. Penn State coaches didn’t just retool their linebacker unit year after year with the previous fall’s most highly touted prep all-American. They frequently converted players from other positions. They also insisted that recruits pass the attitude test. Current players reported back to coaches on recruits after visits and scholarships were often withheld solely on the strength on a player’s opinion that a prospective recruit would not fit the program.

That screening process produced five consensus all-America selections for Penn State linebackers through Paterno’s first ten seasons: Dennis Onkotz twice in 1968 and ‘69, Jack Ham [a High School Offensive Guard] in 1970, John Skorupan [a former receiver] in 1972, and Greg Buttle [another former receiver] in 1975. Some of Paterno’s great ‘backers were bigger than average, some smaller. Some had played the position before, some hadn’t. That didn’t really matter. Joe Pa himself seems a misfit. An Ivy League literature student who has consistently refused pay raises in an era of ever-escalating coaching salary arms races and used no small amount of the money he has earned to partly fund the school’s library [which appropriately bears his name.] 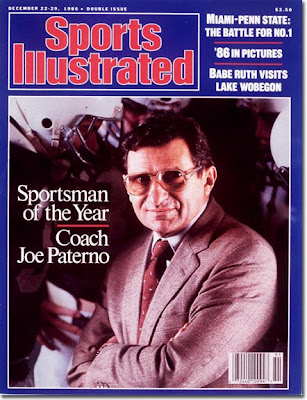 In a profession dominated by maniacal type-A personalities Paterno is a relative renaissance man. It is quite fitting therefore that the defenses that carried his teams should have been built around young men like Greg Buttle. In addition to his outstanding football prowess Buttle was also an active Barber Shop Quartet singer and a sufficiently successful ocean rower to eventually earn enshrinement in that pastime’s Hall of Fame. For all his accomplishment, Buttle remained the consummate Penn State man and never developed an inflated ego. Paterno used to encourage his players to call him “Joe.” Like most of them, Buttle couldn’t bring himself to do so. He continued to bashfully call the living legend “Coach Paterno.” Joe Pa jokingly responded by routinely addressing his all-America linebacker as “Player Buttle.” Shortly before entering the NFL as a third round draft pick by the Jets in April 1976 Buttle joked to a reporter that he had been overwhelmed by his head coach as a young player.

“In my freshman year I never talked to him. I saw him in his shorts one day. I thought, Joe Paterno in shorts. It was like seeing a god in shorts.”

That was typical Penn State — humble, appreciative, respectful. But on the field Buttle had a legacy to maintain and showed his opponents respect only by never giving them a play off. One down at a time through his four-year career Buttle hunted down ball carries and punished them. His 165 tackles as a junior on a team that finished ranked 7th at 10-2 remain the school’s single-season record; as does his single-game high tally of 24 vs. West Virginia on October 26th 1974. His career tackle total of 343 stood as the school’s all-time record for three decades until Paul Posluszny surpassed the figure, reaching 372 in 2006 [after playing slightly more games.]

The 1974 West Virginia game typifies the spirit of Joe Pa’s greatest defenses. Standing at 2-3 Bobby Bowden’s Mountaineers were not the greatest team the Nittany Lions faced all year, but Morgantown is never an easy road trip and Penn State was never in the habit of giving opponents an easy ride whatever their record. In a hard-fought contest Paterno’s team eventually came out on top, 21-12. Three PSU linebackers kept West Virginia quite by racking up an incredible sixty-five combined tackles. In addition to Buttle’s record twenty-four, Buddy Tesner notched twenty-one while pinch-hitting backup Jim Rosecrans added twenty. It is an outstanding achievement that Buttle reached 343 career tackles on a unit in which he constantly shared stats with fellow all-conference selections and second-string youngsters capable of making twenty tackles in a game. Little wonder that he went on to a successful nine year pro career with the New York Jets. Or that the once over-awed student of Penn State’s own renaissance-man-come-football-coach should invest his time and energy after his pro career as a national spokesman for United Way.

It is utterly impossible to single out any great Penn State linebacker from the host of others. Unassuming, hard-nosed defenders made twenty tackles-a-game before Buttle in State College, and plenty have done it since. Any one of Penn State’s all-America linebackers could stand for all of the others; which I suppose is exactly why Paterno has produced so many.

One line in the PSU fight song goes: “We’ll hit that line, roll up the score…” Neither during Joe Pa’s first decade or in the nearly three full decades since has Penn State been known for rolling up scores. But Nittany Lions of the Buttle mold have hit the line down after down like no one else. 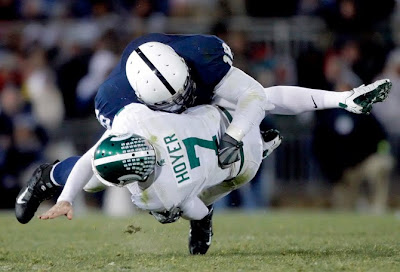 Linebacker U: search and destroy