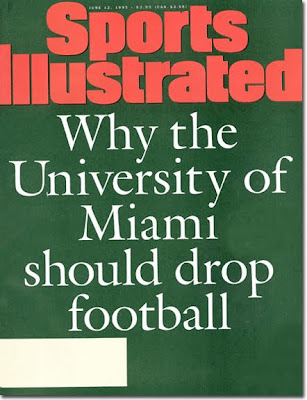 When Jimmy Johnson took over the newly invigorated football program at the University of Miami in 1984 the task of replicating Howard Schnellenberger’s success seemed almost insurmountable. The departing head coach had, in five seasons, taken a program from the verge of euthanasia to a national championship. Still, even after half a decade of solid performances the nouveau riche power of the collegiate landscape still seemed more likely to prove an aberration than true aristocracy. Johnson also seemed a questionable choice for heir to the rising empire. His little-more-than-modest record at Oklahoma State would undoubtedly have been worse were it not for the presence of Heisman winner Barry Sanders in his most recent offensive backfields. But Johnson proved naysayers as wrong as anyone could possibly be. He did so by doing exactly what he done in Stillwater — giving the ball to his best playmakers. Of course, in Coral Gables there were plenty of playmakers from which to choose.
Commenting on the brash, presumptuous and ultra-confident demeanor of Miami football during the ‘80s and ‘90s would have been redundant even before ESPN’s recent 30-for-30 film on the ‘Canes. It would be utterly superfluous now. Every college fan knows [even those that weren’t around at the time] that those perennial championship contending Hurricanes played their own brand of football. That approach allowed Johnson to coach his teams to a 51-9 record with two national championships. Besides the oft-commented-upon “swagger” and the relentlessly dominant winning, those Miami teams are typically remembered as fertile breeding grounds for future pro talent, explosive pass-oriented offenses, and a barely-restrained penchant for thuggish behavior.
Those traits certainly did characterize Johnson’s Hurricanes, but Miami had plenty else going on as well. The aerial feats performed by quarterbacks Bernie Kosar, Vinny Testaverde and Steve Walsh [two of whom were future Pro Bowl selections] were matched by the uncontainable receiving skills of athletes like Michael Irvin, Brett Perriman and Lamar Thomas. Irvin’s particular brand of unapologetic self-promotion defined his professional persona throughout his remarkable NFL career. By proxy it came to also define his alma mater’s entire football program. But not every memorable and productive Hurricane from those heady years fits the stereotype of the pugnaciously self-assured NFL star-in-waiting. 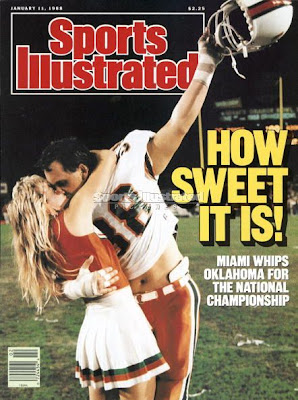 Even by comparison to the rest of Miami’s staggering two-decade run, Johnson’s teams from 1987-89 attained an observable high watermark. The ‘Canes went 34-2 over three seasons and missed out on an unprecedented national championship “three-peat” only by virtue of a controversial one-point loss at eventual 1988 AP champion Notre Dame. During that stretch the high-flying, fast-paced, offensive-minded Hurricanes scored less than twenty points only twice and averaged well over thirty. Those teams produced three consecutive NFL quarterbacks, six running backs and five receivers, but all four of Johnson's consensus all-America selections played defense. Three of them – Daniel Stubbs, Bill Hawkins and Greg Mark – were linemen.
Jimmy Johnson’s emphasis on the defensive front is an overlooked aspect of his legacy at Miami, overshadowed as it was by more memorable backfield speed, offensive output and off-field antics. Johnson played defensive line at Arkansas under the great Frank Broyles, including during an 11-0 national championship campaign in 1964.While Johnson and his staff clearly possessed an eye for innate talent and enjoyed a large pool of local recruits, Miami also coached players very well — in Johnson’s case, particularly defensive linemen.
Daniel Stubbs left Miami in 1987 as the school’s all-time leader in both a career and single season sack totals at 39.5 and 17 respectively. Both records remain unsurpassed. To no one’s surprised the 6’4” 250 lb pass-rush machine went on to a successful ten year NFL career that included Super Bowl rings with the 49ers in his rookie and sophomore years. Hawkins and Mark, on the other hand, did not enjoy such fortune as players beyond college. In four injury-hampered seasons with the Los Angeles Rams Hawkins started fewer than twenty games. A disappointing pro career contrasts markedly with the heights Hawkins attained in college, such as his 1988 18 tackle-for-loss and 7.5 sack marks in 1988. The following year Greg Mark became the unit's leader, registering an amazing 15.5 sacks en route to a national championship. Like Hawkins, Mark also failed to make an impact at the next level. His two year NFL career with the New York Giants included few highlights. By 1992 Mark was back in Coral Gable as a graduate assistant, beginning an assistant coaching career at his alma mater that was to last until 2005. Jimmy Johnson's 'Canes: Unquestionably No. 1
Hawkins’ 3.85 GPA in High School led his football team. He went on to earn a finance degree with a solid 3.4 GPA. Mark’s coaching career proved his organizational and leadership abilities, and analytical skill. Neither was a brainless jock riding a broken system at a “pro factory” school that invariably passed its football through with no semblance of an education. No doubt plenty of Miami players left Coral Gables without much education [as they did every where during the 1980s], but that was not necessarily the rule and certainly wasn’t for Hawkins and Mark. For lovers of the college game it should be these players that define the greatest teams of the greatest era of Hurricane football. They went to class, studied, and graduated. And both achieved the highest points of their playing lives in college playing the game as amateurs. Player of their ilk, as much as Irvin, Perriman, or Testaverde, carried Miami to victory after victory over other highly teams that looked to knock the 'Canes off their perch.
When Miami defeated Oklahoma in the Orange Bowl on New Year’s Day 1988 it marked the third consecutive season they had handed the Sooners their only loss. In meetings between college football’s two most successful programs of the 1980s Miami emerged as the undisputed champion. That had a great deal to do with passing offense. In each of those three seasons Miami not only provided OU’s only loss but was also the only team to hang more than twenty points on them. Through three seasons no other opponent came any closer than seventeen. Behind Testaverde and Walsh’s downfield passing the ‘Canes posted twenty-seven, twenty-eight and twenty points. 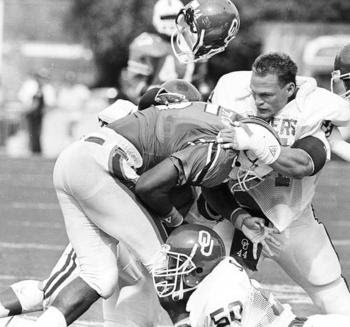 In October 1985 Miami waltzed into Norman and stunned OU as Testaverde hit 17 of 28 passes for 270 yards and two touchdowns. The next year back in Miami he was even better, completing 21 of 28 for 261 yards and four touchdowns. In the 1988 Orange Bowl Walsh made 209 yards on 18 of 30 for two scores and one pick. All three of those Sooner defenses ranked statistically among the very best nationally. Miami emphatically showed that the days of front-loading defenses with the best athletes playing in the box to stuff the run were over. Those offensive performances left an enduring impression on football fans in general and OU fans in particular.
But just as important to those victories were the stifling performances of Jimmy Johnson’s defensive lines. OU reached its great heights during the Switzer era on the strength of a seemingly unstoppable manifestation of Darrel Royal’s wishbone offense. In 1985 quarterback Jamelle Holieway rushed for 861 yards on 161 attempts. In contrast he threw the ball on only 58 occasions all season, completing an unimpressive 24 for 517 yards and only 5 TDs. Passing stats hardly seemed necessary for the AP champion Sooners, however, with fullback Lydell Carr adding 883 yards on 188 carries. OU’s two most proficient backs generated more than 1,600 yards rushing offense alone. That productivity continued. In 1986 Holieway rushed for 811 yards on 139 carries, supported again by Carr who made 548 on 101. Earl Johnson added 537 on 72 carries at halfback. Again Holieway’s passing game was a mere afterthought, amounting to 541 yards and 4 TDS on 30 of 63 [barely five attempts per game]. In 1987 the trio of stand-out juniors ran roughshod again. Holieway made 860 yards on 142 attempts while Carr and Thompson were good for 676 and 731 yards respectively on 105 carries each. Oklahoma’s prolific ground game averaged around three hundred yards per outing, except when they played Miami. The 1988 Orange Bowl was typical. Despite their second consecutive No. 1 ranking going when meeting Miami, OU once again stalled. The Sooners managed just 179 team rushing yards. Between the all-American bookends of Daniel Stubbs and Bill Hawkins the Miami line held OU’s wishbone attack between the tackles all day.
While Miami’s high-flying air attacks are rightly remembered as trend setting offenses that ushered in a new era of pass-first college football, the ‘Canes epic threesome of contests against the other great power of the 1980s were won on defense at the line of scrimmage. Perhaps because many of the players involved in those defensive stands did not go on to legendary pro careers, the legacy of Jimmy Johnson’s defensive lines are often subsumed in the image of his irrepressible offenses. That may be understandable, but it is also unfair.