The Holy War: A rivalry disrupted?

As the final seconds drained from the clock at Couger Stadium in Provo, UT on November 20th 1993 the Ute's sideline erupted in an understandable wave of irresistible elation. Utah had not beaten its bitter arch-rival on the road since 1971. Prior to that date the University of Utah had been so much in the habit of beating BYU that the event barely merited mention. Up to 1971 BYU had defeated its great publicly funded nemesis on only five occasions in a whopping forty-seven attempts. To call the rivalry lopsided would be a ludicrous understatement. No one in Utah could have guessed on November 20th 1971 that the balance of football power in the Beehive State would shortly undergo a meteoric shift. A narrow 17-15 Ute win was the final game in the unimpressive sub-500 tenure of BYU head coach Tommy Hudspeth. BYU promoted defensive coordinator LaVell Edwards to the top job, many thought temporarily. Twenty-nine seasons later Edwards retired owning a 22-7 record against Utah, leaving a program that had earned an AP national championship, a Heisman Trophy, and at least a share of no less than twenty conference championships. 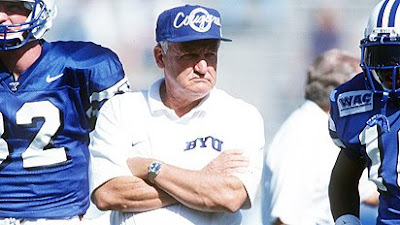 None of the Utah Utes who surged off their team's bench to celebrate on the Cougars' home field could even remember the day exactly two decades earlier that their school had last triumphed in Provo. Who could blame them for attempting in their momentary euphoria to tear down the BYU goal-posts? As Ute receiver Bryan Rowley later told a reporter:

"We were just excited. That's over twenty years of frustration... If they hadn't won in twenty years, they would feel the same way."

In fact, BYU players, fans, and coaches did not see things so philosophically. Cougar players rushed to the endzone and attempted to initiate a mass brawl rather than watch their hated foe rip down their goal-posts. A few handbags, insults, pushes, and shoves later, stadium security and coaches separated the groups and the incident was over. BYU's hurt pride, however, was less quick to subside. In an unguarded comment after the game, nose guard Lenny Gomes allowed the disdainful arrogance which had come to characterize Cougar attitudes towards their in-state rival bubble to the surface:

What more there might be to life than an impressive annual salary Gomes failed to discuss. LaVell Edwards was more diplomatic, only saying that he had never seen anything like a visiting team attempting to tear down the home goal-posts and refusing further comment on the subject.

It is natural for football personnel and fans to see their rivals' actions in the worst possible light. That is exactly what makes rivalries such an integral, wonderful part of the fabric of college football. But perhaps BYU people should have taken a step back and thanked their good fortune that after fifty years of futility in the series their school had so emphatically seized the upper hand that Utah players would react to beating them in such a dramatic fashion. 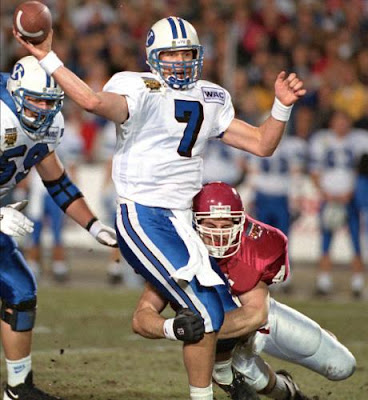 Doubtless the Ute reaction followed no premeditated plan to offer specific offense. The elation surrounding the moment of victory had been as much a factor of the game's final few possessions as the context of the preceding two decades. Typical of the fast paced aerial explosions that defined the Edwards era, the two teams had thrown the ball around as though passing was about to go on ration. BYU quarterback John Walsh compiled 423 yards on 35 completions in a stereotypically massive 57 attempts with a touchdown. His counterpart Mike McCoy answered yard for yard, going 30-of-49 for 423 yards and 3 TDS. The difference makers on the day turned out to be Utah's 167 team rushing yards on 39 carries [as opposed to just 78 on 20 for BYU], and Walsh's careless, season-high five interceptions. BYU picked off McCoy only twice.

Despite jumping out to a 14-3 fist quarter lead behind drives of 68 yards on six plays and 80 yards on nine, Utah had allowed the Cougars back into the game. Although BYU briefly levelled the game late in the third quarter the Utes responded immediately and appeared to be back in the driving seat, as they had most of the day. After a touchback on BYU's kick Utah started on their own twenty and gained nothing on two plays. Sensing the shift in momentum a three-and-out would provide following their offense's game-tying score, the Cougar safeties moved up and showed blitz. McCoy anticipated the pressure and called an audible for receiver Curtis Marsh to come over the middle. The Ute quarterback called for the snap from the shotgun formation and quickly dumped it to an open Marsh behind the BYU pass-rush. He then ran 80 yards to the endzone and shed much of the frustration of his injury-plagued year in one glorious play. 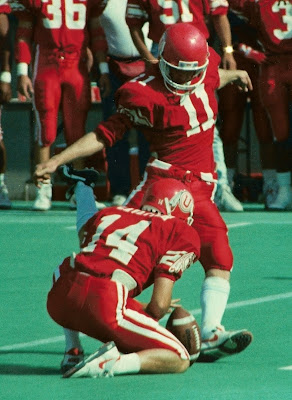 On the back of such a stunning score Utah players were riding high. As a result, BYU's successive fourth quarter come-back drives must have created intense frustration on the Utah sideline. The long awaited road win that seemed so tantalizingly also refused to come completely within reach. The bad news began with a missed PAT following Marsh's TD by Utah kicker Chris Yergensen. The Ute specialist had already missed two mid-range field goals. Seven wasted points seemed so precious when BYU responded immediately with a nine play drive provided an immediate response and despite all of Walsh's interceptions gave BYU a one-point lead. But the Utes wouldn't give up either and retook the lead with less than five minutes remaining on an impressively conducted eighty-yard drive in fourteen plays that included a clutch 17-yard McCoy strike on third and ten to bring the Utes inside the Cougar redzone. A touchdown and successful two-point conversion restored a seven point lead, but again BYU answered. Walsh finished a scoring drive with a one-yard sneak after moving his offense 64-yards in 4 previous plays that included completions of 30 and 19 yards.

With both defenses apparently AWOL, the desperate struggle had reached the point at which victory would likely go to the team that possessed the ball last. With barely over a minute remaining that was Utah, but after the BYU kicking coverage team pinned the Utes well inside their own twenty a score seemed unlikely. McCoy and the Ute offense ground out 47 yards on ten plays before sputtering out at the BYU 45-yard line with just 00:25 on the game clock. Up against BYU's ever-dangerous passing offense, turning the ball over on downs at the half way line with twenty ticks still to play would have been risky. Handing the opportunity for redemption to Yergensen seemed an unlikely bet for Ute coach Ron McBride, but there was no alternative.

Clearly the football gods had decided it was time for momentum in the Holy War to shift back from Church to State. The previously luckless kicker somehow curved a perfect effort through the uprights from fifty yards, going in an instant from Utah football infamy to glory. The Utah bench exploded and was still in the throes of jubilation when the clock expired.

"It's not just between BYU and Utah. Its a lifestyle conflict."

That's exactly what it is. The Holy War is a unique and precious rivalry in college football because there is no other dynamic that matches a flagship religious school with a public institution whose fans are, in many cases, so very different. BYU people are typically modest in lifestyle but with a barely concealed arrogance and disdain towards their wayward, worldly Ute kin. Utah fans, on the other hand, respond with the brash, unapologetic immodesty that smacks of the rebellious teen acting up in the sight of a disapproving parent. This dynamic doubtless fueled the ironic chants of "Repent! Repent!" which rang out from a tiny corner of the Utah faithful that night in Cougar Stadium.

Utah and BYU fans do not like one another. Both believe the other party to be arrogant and misguided. Both harbor an unbridled sense of superiority. Feelings run high and parties are easily offended. That is doubtless why when Utah received an invitation from the big leagues this summer, BYU athletics director Tom Holmoe and President Cecil Samuelson responded with a plan to lead Cougar football out of Mountain West obscurity and into [potentially equally obscure] independence.

At the time of writing, BYU's quest for football independence in order to allow a renewed relationship with ESPN has five more days to play out. According to the most recent rumors this process could damage or destroy no less than three conferences [one of which BYU was the leading party in founding] without actually improving the Cougars' position in the CFB landscape. Whatever happens, one thing is certain: BYU people hate Utah people so much that they don't respond well to seeing them get a bid to the rich, pretty girl sorority while they are left to hang out with the chubbies.

University of Utah administrators, on the other hand, are now so high on their new found status as members of the sport's bourgeoisie that they are openly talking about not playing BYU every year or at least moving the game to an earlier date. Some rumors even indicated that Utah people have flirted with suggesting a two-for-one structure, which BYU people would surely sacrifice their children before accepting.

Such talk on both sides is silly. Schools need an annual rival, preferably one played each year as a final date towards which all preceding games build. If Utah thinks they can live without that, they should ask Nebraska how well Colorado does as a replacement for an annual November date with a hated conference foe. And frankly, college football as a whole needs a rivalry filled with so much hate that things get more than a little religious and end in the occasional brawl. 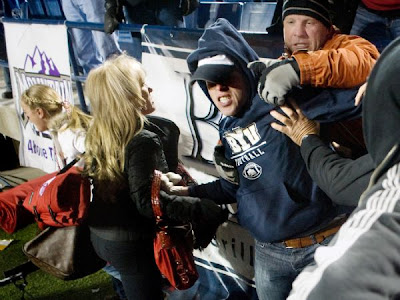