On November 16th 1947, fifty years to the day since the admission of Oklahoma to the Union, Terry Brennan’s Fighting Irish rolled into Norman and stunned the Sooners 7-0. The game is legendry in college football history. Especially for Sooner fans, who always recall with superstitious chagrin the curse laid on their team by that week’s Sports Illustrated cover, which proclaimed: 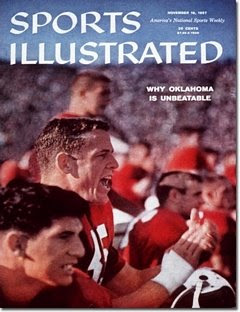 “Why Oklahoma is unbeatable.”

Curse or no, the Sooners seemed unbeatable. Oklahoma had won 47 consecutive games stretching back to the third game of the 1953 season. Throughout the incredible streak, still an NCAA record, OU coach Charles “Bud” Wilkinson regularly told his players:

“No one will remember how many games you win. They will only remember the team that beats you.”

That warning turned out not to be true. College football fans remember both. The magic number stands out as an unrivaled accomplishment. With the modern game becoming increasingly competitive, especially in the post 85-scholarship limit age, I personally doubt it ever will be broken. The name of the team that broke the streak is memorable for the symmetry it provides the story. The OU-Notre Dame rivalry is full of the kind of unlikely tales and Titanic clashes that make this game so irresistibly fascinating.

Entering the fateful game in November 1957 Oklahoma’s most recent loss had occurred in South Bend on the opening day of the 1953 season. Frank Leahy’s 2-0 record against Wilkinson makes him one of only two coaches with a winning record against Bud over more than a single game. The other is the Bear. In his entire coaching tenure at Oklahoma, lasting 17 seasons and 145 games, Wilkinson went 1-5 against the Irish. All-time the University of Oklahoma’s record against Notre Dame stands at 1-8. The Sooners do not own loosing records against any other current division I teams except Northwestern (against whom they would be 2-1 if not for an infamous poisoning incident in Chicago 1959 likely connected to mob gambling) and Texas (against whom they are .500 since WWII). In Wilkinson’s first 13 seasons as OU head coach only Texas and Notre Dame beat his teams more than once. Oklahoma’s only win against ND had come the previous year, during a 2-8 campaign that still ranks the Domers’ worst ever. OU laid a 40-0 shutout smack-down on a woeful team memorable only for the backfield exploits of eventual Heisman winner Paul Hornung. The game began ominously for the Irish when, in the first play from scrimmage, consensus All-American Linebacker Jerry Tubbs laid a hit on the “Golden Boy” that Oklahomans are still talking about. Notre Dame smarted from that loss for over a year and counted the days until their chance at revenge. How could anyone but the Irish have broken the streak?

The way the streak ended was also perfect because great teams should only lose to great teams. Love them or hate them, the Fighting Irish tower above all college football history with pageantry, tradition of greatness, and undeniable mystique that are simply peerless. Wilkinson’s Oklahoma teams are only a step behind. Bud’s attitude and approach created a juggernaut in Norman that has rolled on ever since (despite a few temporary hiccups). His professionalism, technical genius, and dedication to precision continue to define OU football. Bud used to tell his players in practice:

“Base your play on the standards most likely to defeat the champions. The good ones don’t take the fake. You’ve got to block ‘em.”

Wilkinson’s record in his first 13 seasons, from 1947 to 1959, was a staggering 121-10-1. In addition to his 47 game winning streak in the mid fifties, Bud compiled a 31 game run in the late forties. No other coach has since matched this string of wonder seasons, and none will.

How did Bud manage such astounding success? The answers to that question address the deep foundations of OU's footballing greatness. Bud was the first Oklahoma coach to establish an unstoppable recruiting network in Texas. Time and again Wilkinson and his indefatigable assistant Gomer Jones attracted Texan athletes and brought the best out of them before unleashing them on the disgruntled Longhorns. George Brewer, Jerry Tubbs, Jake Sandefer, Bob Harrison are only a few notable Texans to play for OU in the Wilkinson era. That recruiting legacy continues to this day. Any given year around two thirds of Bob Stoops’ roster will be comprised of Texas High School products. Jealous Longhorn fans occasionally refer to OU as "UT-Norman," but the simple fact is that Texas boys head north for the same reason today that they started going in the late 1940s. They want to win. 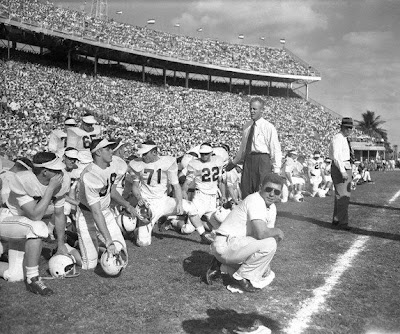 In or out of state, great High School players flocked to Oklahoma for the tradition of victory. Why else would young studs move to a quiet college town like Norman? To me, this is one of the greatest things about college football. In the most popular and vibrant athletic show in this massive, sports-obsessed nation the centers of the game are towns like South Bend, Lincoln, Tuscaloosa, Norman, Ann Arbor. Politics, finance, film, music, pro-sports and any number of other institutions that define American life may live in big cities like Chicago, New York, L.A., or Washington, but college pigskin lives in tiny towns where people go to be with coaches who win. That was Bud Wilkinson. States like Oklahoma, Nebraska, Alabama or Tennessee may not have a great deal else going on but they will run over you in football.

Many have attributed Oklahoma’s tremendous winning streaks to an inferior class of opponent. Indeed, the Big Seven (later Big Eight) was not a powerhouse conference at the time. Wilkinson won 14 Big Six/Seven/Eight Conference titles, including 13 outright and 12 consecutively from 1948 to 1959. Between 1948 and 1958 the Sooners never lost a conference game. The relative weakness of Oklahoma’s conference slate explains why undefeated Sooner teams were not voted AP national champions in 1949 and 1954. In the first of those years OU finished 4th in the final poll, which in those days was still published before the bowls. But Wilkinson went on to defeat the top-ranked national champion Maryland Terrapins, coached by his former boss Jim Tatum, in the 1950 Orange Bowl.

Whenever the Sooners played out of conference against top opponents they rarely struggled, posting a 7-2 bowl record under Wilkinson. A short-lived Big Seven prohibition on repeat post-season appearances robbed the great 1956 team of an opportunity to play for a bowl and improve Bud’s record. Wilkinson’s only bowl losses both came against the great Paul “Bear” Bryant, in the 1950 Sugar Bowl, vs. Kentucky, and the 1963 Orange Bowl, vs. Alabama. 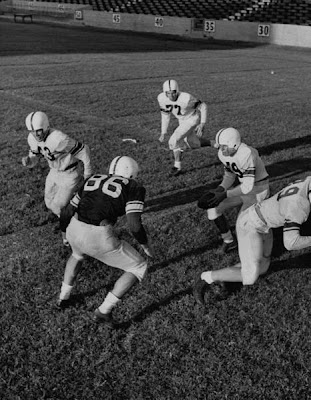 Ultimately, weakness of conference schedule does not detract from Wilkinson’s legacy. College football’s great dynasties would simply be impossible without the many conference also-rans on whom the bigger fish perennially feed. While the limited field of teams in pro-sports pitch the heavy-weights against one another on a more regular basis, the clashes of college football’s giants are more dramatic, intense, passionate and memorable precisely because they occur less frequently. The Michigans, Ohio States, USCs and Alabamas would possess nowhere near their 10-win season tallies without their obliging Northwesterns, Oregon States and Vanderbilts. What stands out about Wilkinson’s Sooners is not that they played poor teams but that they never lost to them. The Bear lost occasional games to the likes of Mississippi State; Woody Hayes slipped against underwhelming Big Ten outfits. Wilkinson teams never lost when heavily favored.

To me, this is the greatest aspect of the Wilkinson legacy. In an age dominated by brutalizing and vicious coaching tactics, Bud was known for his short but finely tuned practices. He did not make his players hit unnecessary to “toughen them up". He did not run them to death in the summer sun because he could. He did not subject them to two-a-days without water or virtually kill them. His teams were fast and fit, but they worked on those aspects in the training room. Wilkinson was ahead of his time in so many ways. His program looked more like the “strength and conditioning” focus of college football today. He was famous for personally putting in four hours of detailed preparation for every hour of practice. His drills were timed to the second with every moment acutely choreographed in detailed notes. No time was wasted. He always, always told his players that Saturday’s game began on the first meeting the preceding Sunday evening. His players watched more film and were smarter than all their rivals. 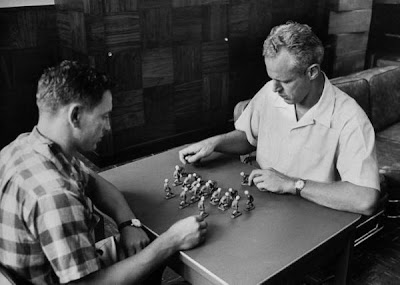 What else could be expected from a man with football smarts so impressive that even the great Minnesota coach Bernie Bierman trusted him to call plays for the national champion Golden Gopher teams of 1934-36, even though he played Guard? The Sooners played hard and demonstrated commitment every game, every down - from the first whistle to the final gun. In an era when players had to play both sides of the ball and could not return to the game until the following quarter if pulled, few teams developed the depth that OU consistently demonstrated. Wilkinson essentially beat a rule designed to restore one-platoon football by developing his “alternate team” (as second strings were then known). When other teams put their alternates in for the final few minutes of a quarter, resting their stars, a drop off in production generally resulted. Wilkinson’s preparation and his commitment to rotation was such that his alternates invariably emerged as one of the few teams in the nation capable of hanging with the OU starters.

One story encapsulates the Oklahoma mentality perfectly. In the 1952 game against Nebraska, fullback Buck McPhail gave a crushing block for ball carrier Billy Vessels. Running into a crowd of defenders Vessels quickly cut back the other way. McPhail got up and charged into a second block on a defensive back. Then, as Vessels burst into the open field, McPhail found the energy to charge down the last pursuing Cornhusker with a third block, leaving the eventual Heisman trophy winner to waltz untouched into the end zone. Wilkinson-coached players always looked for ways to contribute and never stopped thinking. They looked down field and kept a mental step ahead of their opponents.

Today OU teams still charge out of the gates, routinely hanging three or more touchdowns on weaker opponents in the opening 15 minutes. This pattern is somewhat annoying when non-Sooner fans visit Owen Field on the rare days when OU has the gall to disappoint demanding locals by not leading 50-0 at halftime. Listening to 80,000 spoiled Sooners grumble because their team is not winning by enough isn’t much fun. Believe me, I’ve done it. But what can you expect? Bud Wilkinson created a mentality of professionalism, focus, dominance and determination in Norman that has lasted sixty years and counting.